Conquer Dreamland to get rid of its people's laziness (failed)

Dark Knights
The Meta-Knights are a minor antagonistic faction in the Kirby franchise. They are a group of warriors led by Meta Knight and Captain Vul who have often opposed Kirby during his adventures.

The original Meta-Knights (Ax Knight, Javelin Knight, Mace Knight, and Trident Knight) first appeared as Mini-bosses in Kirby's Adventure alongside their chivalrous master. Each of the knights are masters of their own specific weapon. Not much information was given about them, except for their likeliness and alliance with Meta Knight, and they were given minimal to no characterization. Kirby encounters them for their first time in the second level, Ice Cream Island, and then fights them once per level up until the last level (Rainbow Resort).

While Meta Knight apparently has legions of warriors serving under him, judging by the following games, these four are his main foot-soldiers.

In the remake, the normal boss music does not play, instead, a remix of the mini-boss theme from Kirby 64: The Crystal Shards is played.

In Kirby Super Star, the Meta-Knights re-accompanied their master on a full-on assault of Dream Land with their powerful warship - the Halberd. But their plan ended early when the ship was taken down and crashed down below into Orange Ocean, thanks to Kirby. The group or warriors seemingly disbanded after the destruction of the Halberd, as they haven't appeared since then, nor did they appear when the Halberd flew again during the events of Kirby: Squeak Squad. The Meta-Knights seem to be unable to survive in water; in Milky Way Wishes in Super Star and its remake, in the area where the Copy Essence Deluxe for Sword is found on Aquarius, the Meta-Knights are seen guarding the door to the area, and when Kirby attacks them, the knockback usually gets them in the water, and they explode inside it. This was also hinted when the Halberd was crash-landing in the Secret Sea—the Meta-Knights survived the explosions of the Halberd, but had to escape due to the fact that they were crash landing in water.

The Halberd is controlled by Meta Knight himself, the four aforementioned knights, Captain Vul, and a sailor hat-wearing Waddle Dee. After the Halberd is destroyed, Waddle Dee and the other four knights seemingly stay loyal, and vow to stay with Meta Knight to the end. Captain Vul on the other hand, was first to evacuate the Halberd prior to the crash, so it can be assumed that he distanced himself from Meta Knight almost immediately afterward.

Originally, Mace Knight and Axe Knight were Meta Knight's loyal sidekicks, since they refused to leave him when the ship was going down. They stayed with Meta Knight to fight Kirby one last time. In the anime, they were replaced by Sword Knight and Blade Knight.

Kirby Super Star Ultra also introduces two more members of his crew. In Meta Knightmare Ultra, Meta Knight can call upon Sword Knight and Blade Knight to help aid him in his galactic conquest. Although they were already prominent enemies in the series, they were never closely associated with him. They also serve under Meta Knight in the anime, almost always by his side. They are believed to be either apprentices or body guards in this appearance.

In the ending credits for "Meta Knightmare Ultra", only Captain Vul, Sailor Dee, and Ax Knight makes a brief cameo in a snapshot with Meta Knight, in the interior of the Halberd.

They finally appear in an original game as part of the "Kirby Quest" and "Strato Patrol EOS" sub-games. The four knights will attack Kirby before he can advance inside the Halberd to defeat Meta Knight. The order is Javelin Knight, Mace Knight, Trident Knight, and Ax Knight. Their attacks are also more effective, powerful and can cover long distances.

The Meta-Knights appear as an Ace class primary neutral Spirit, with their ability to increase all sword attacks. Their Spirit Battle is a stamina battle against seven Meta Knights equipped with Killing Edges. Only one appears at first, but more join in once he is defeated.

Swords are used by Sword and Blade Knights. Fortunately, these swords are standard issue (unlike their leader's). Among some swordsmen, these swords can release a beam called Sword Beam, but only if fired by full health or energy focus.

Flails are only used by Mace Knights. Like the Yo-yo ability, it also swings like a handed boomerang.

Axes are used by Ax Knights. They are of the twin-bladed variant, and can be thrown further than the maces can be swung.

Javelins are used by Javelin Knights, even though they're not normally knight weapons. They fly similarly to Cupid's arrows.

Tridents, also not a weapon normally used by knights, are used by Trident Knights. They are either thrown at or jetted into their enemy (a feature only seen in Kirby Super Star and its remake).

Battleship Halberd is the warship of the Meta-Knights. Staying features are the laser of the Combo Cannon, the bat-like wings, and Meta Knight's mask. In early versions, the underside of the Halberd is like a ship, a red glider, but not in the remake of Super Star, which is a long cannon and several cannons. Also, it has many Tri-Cannons mounted on the rear bottom and lower sides. 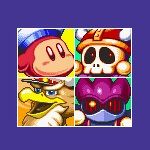 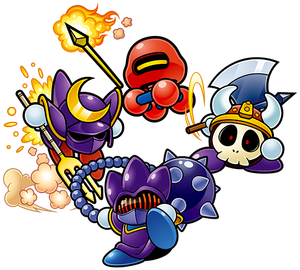 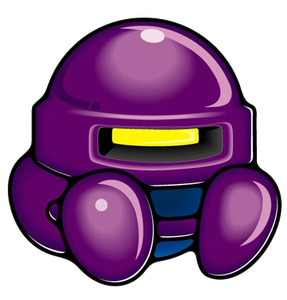 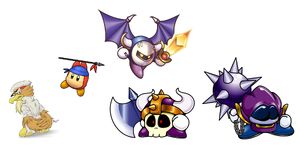