Meta Knight is an anti-hero from the Kirby series. He is the leader of a group called the Meta-Knights (Sword Knight, Blade Knight, Axe Knight, Javelin Knight, Trident Knight, Mace Knight, Captain Vul, and Sailor Waddle Dee) and Kirby's rival.

Meta Knight first appeared as a boss in Kirby's Adventure, along with its remake Nightmare in Dreamland, and the main antagonist of the Revenge of Meta Knight sub-game in Kirby Super Star, in which he attempts to put an end to the lazy lifestyle of the inhabitants of Dreamland, with the Halberd. However, in many games following this, Meta Knight appears as an ally to Kirby. Alongside King Dedede, he is one of the two main antagonists of Kirby Fighters 2.

Meta Knight makes his first appearance here, although he is never given a proper name. In this game, King Dedede, after splitting the Star Rod into several pieces to prevent the evil Nightmare from wreaking havoc on Dreamland, recruits Meta Knight and the Meta-Knights to protect one of the Star Rod's pieces.

Throughout every world, Meta Knight would send his soldiers after Kirby in order to stop him, although, alternatively, this can be seen as Meta Knight trying to prepare him for Nightmare. He later duels Kirby at the base of his operations, Orange Ocean.

When Meta Knight loses, his mask is split in two, revealing his face. He then quickly retreats. In Kirby: Nightmare in Dreamland the "Meta Knightmare" sub-game is unlocked after clearing the game 100%. In it, Meta Knight rushes through the stages to practice his swordplay, ending once Dedede is defeated. While stronger and faster than Kirby, he only has three health bars compared to Kirby's six, and the player is not given the option to save until the sub-game is over.

In perhaps his most famous role, Meta Knight appears as the main villain of the sub-game Meta Knight's Revenge. In this sub-game, Meta Knight plans to end the lazy lifestyle of Dreamland by force by using the Halberd to take it over. However, his plan is foiled by Kirby who defeats him in a duel, destroys the Halberd and escapes on a Wheelie Bike. Besides possibly Kirby's Adventure, this is Meta Knight's only villainous role.

Kirby and the Amazing Mirror

In Ice Island, after Kirby defeats Daroach and reclaims the chest presumed to hold his Strawberry Shortcake, Meta Knight snatches it away and flees to the Secret Sea. Kirby chases after him and defeats Meta Knight, obtaining the chest. However, Meta Knight was trying to keep the chest away from Kirby, as it held the imprisoned Dark Nebula, which Daroach found out the hard way when he opened the chest and was possessed by the Lord of Darkness.

Alongside King Dedede, Meta Knight is ambushed by the yarn sorcerer, Yin-Yarn, and warped into Patch Land. He is the boss of the seventh world, Space Land, where he is controlled by a machine producing magical swords. Once Kirby arrives and defeats Meta Knight by snatching and tossing away all of the swords, he aids Kirby and Prince Fluff by warping them to Dream Land to stop Yin-Yarn from turning everything to yarn. During the final battle, when Yin-Yarn turns into Mecha Yin-Yarn, Meta Knight drops a Tankbot metamortex for Kirby and Prince Fluff to transform and defeat the sorcerer.

In Kirby's Extra Epic Yarn, Meta Knight appears as the protagonist of one of the game's subgames. In it, the player controls a flying Meta Knight in an endless sidescroller, slashing down enemies in his way.

Meta Knight appears in the subgames, as the penultimate boss of Stato Patrol EOS and the boss of Chapter 3 and one of the last opponents of Chapter 4 with Blade Knight and Sword Knight in Kirby Quest.

When the Haltmann Works Company invade Popstar and begin mechanizing the landscape, Meta Knight attempts to use the Halberd to fight against the HWC mothership, the Access Ark, but the Halberd is shot down instantaneously. Afterwards, Meta Knight is captured by the alien invaders and mechanized by their Mother Computer, Star Dream, into a cyborg warrior known as Mecha Knight. Kirby encounters Mecha Knight twice in the game, the first encounter in Gigabyte Grounds and later in the Access Ark center where he is upgraded by Susie to become Mecha Knight +, but is once again defeated by Kirby. His mechanic mask shatters, breaking him out of his hypnosis and returns to his senses.

Shortly after Kirby defeats President Haltmann and Star Dream flies out to destroy all life in the cosmos, Meta Knight arrives with the Halberd and orders Kirby and his Robobot Armor to hop on. Instead, Kirby uses his Robobot to absorb and copy the Halberd, and uses it to defeat Star Dream in a galactic dogfight. In the last moments, Star Dream fires a laser at the Halberd, damaging it, and Meta Knight ejects Kirby and the Robobot and pilots the Halberd back to Dream Land while Kirby drills Star Dream through the Access Ark, destroying both machines for good. Meta Knight is last seen observing Popstar returning to normal aboard the Halberd.

In the sub-game "Meta Knightmare Returns", unlocked after completing the game, Meta Knight once again rushes through all of Kirby's stages. After defeating Haltmann in the Access Ark, Star Dream, viewing Meta Knight as its new administrator, creates clones of Dark Matter Blade and Queen Sectonia to test the knight's strength. After Meta Knight defeats the two, Star Dream summons a portal containing Galacta Knight to serve as the third and final test. Galacta Knight seemingly destroys Star Dream by slashing it and engages Meta Knight, only to be defeated and resealed back into his dimension.

Meta Knight is infected by a Jamba Heart caused by Hyness' failed attempt to summon Void Termina, serving as the boss of the second area, World of Miracles - Planet Popstar in the stage Sacred Square. He splits into four clones after taking enough damage, though the real clone takes more damage. After he is defeated and freed from the Jamba Heart, he can join Kirby's team as a Dream Friend, where his moveset is identical to his appearance in Kirby's Return to Dream Land. Alternatively, Kirby can befriend Meta Knight right away by throwing a Friend Heart immediately after defeating him.

Meta Knight was one of many newcomers in Super Smash Bros. Brawl.

In Subspace Emissary, He first encounters Marth and has a brief duel with him, but the two quickly join forces to defeat the Primids attacking them. They later encounter Ike, who becomes their teammate.

Later, the three swordsmen meet a robot known as Galleom and defeat him. After saving Lucas and the Pokemon trainer, Meta Knight and the Ice Climbers climb an ice mountain where he duels with Lucario.

After their duel, they board the Halberd and team up with Snake. After retaking the Halberd by beating Duon Meta Knight joins the other heroes in the battle against the Subspace Army and their leader, Tabuu getting Bowser Ganondorf and Wario to help.

He is currently ranked first in the Super Smash Bros. Brawl tier lists, and is notorious in the game due to his extreme power.

Meta Knight appeared as an anti-hero as well as an ally for Kirby in the anime. Originally, he was a Star Warrior alongside Kirby who fought in the war with Nightmare's monsters, as well as one of the only survivors. He assisted Tiff and himself to help Kirby defeat enemies from Nightmare Enterprises that King Dedede has ordered. He is also shown to reveal Kirby's past in Tiff's dream.

Meta Knight wears his trademark attire, including his silver mask, and his blue (or dark purple depending on the game appearance) Dimensional Cape with gold trimmings, as well as a pair of patched or metallic shoes. He also appears to have yellow eyes. He has retractable bat-like wings and flies with them in the games. The wings' first prominent use is in Kirby Super Star, where Meta Knight chased Kirby near the end of Revenge of Meta Knight. In Kirby Air Ride, he can fly with them whenever he takes part in a race. Meta Knight's weapon of choice is usually the Galaxia sword, which is a spiked golden sword with an embedded ruby in the hilt. Under his mask is a face that closely resembles Kirby's but with a dark tone. 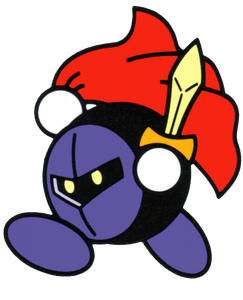 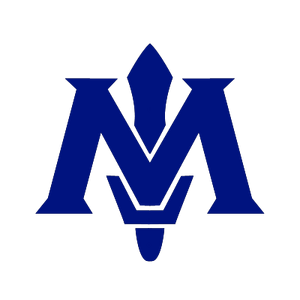 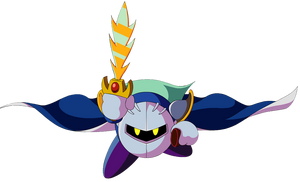 Meta Knight in Kirby: Right Back at Ya! 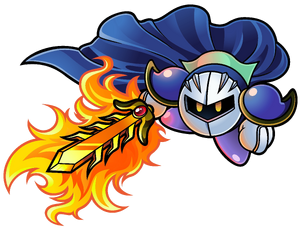 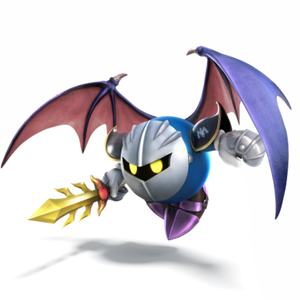 Meta Knight in Super Smash Bros. for Nintendo 3DS and Wii U. 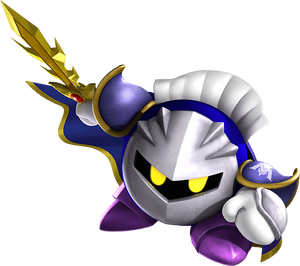 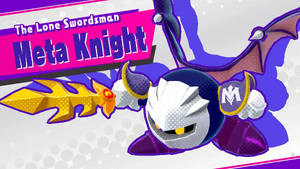 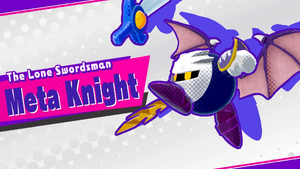 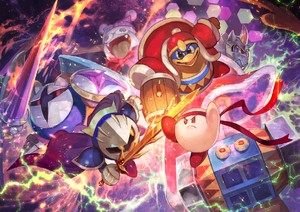 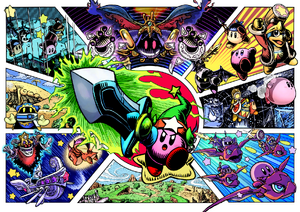 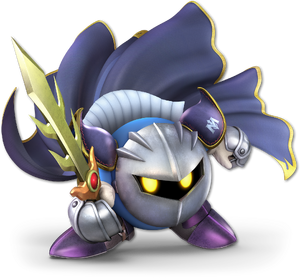 Meta Knight as he appears in Super Smash Bros. Ultimate. 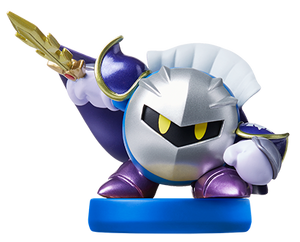 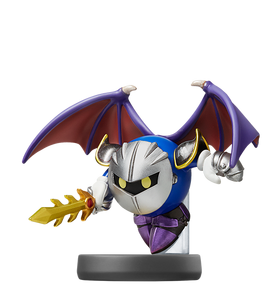 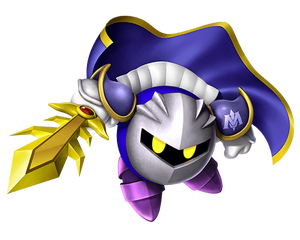 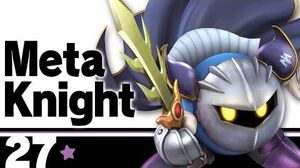 Retrieved from "https://villains.fandom.com/wiki/Meta_Knight?oldid=3997802"
Community content is available under CC-BY-SA unless otherwise noted.