Conquer Earth and place it under the control of Robots.

Metal Alice is an extremely powerful robot designed and created by Vrak in order to destroy the Power Rangers Megaforce. She has Admiral Malkor, Vrak and The Messenger as her allies and comrades, the first two being the only organic beings towards which she displays any respect, care or value. She is the secondary antagonist in Power Rangers Megaforce.

As the war between Warstar and the Rangers grew more intense and both the Insectoids and Toxic Mutants proved incapable of defeating them, Vrak hatched a plan to use machines. In order to do so, he built an underwater base and created Metal Alice to give the humans a challenge unlike any they had ever seen and to truly test their limits, as they had already destroyed Creepox, Bigs and Bluefur and defeated Vrak himself several times over.

Blindly loyal to Vrak, she soon created Rotox and sent him to the city to draw out the Rangers. They tried to fight back against the new enemy but were easily outmatched and only triumphant after accessing their Ultra Mode state. Metal Alice, however, merely shrugs off Rotox's fall as a minor setback and goes to reconstruct him while also adding some upgrades. Soon enough, Rotox DX is born and once again goes to wreak havoc in the city, this time with Metal Alice's company. The improved robot makes quick work of the Rangers before Robo Knight attempts to enter the stage. Metal Alice stops him and tries to convince him to join her, leaving along with Rotox DX soon thereafter. Robo Knight is confused by this and both he and the Rangers take some time to think about what happened and what is the new strategy of their enemies.

As the robotic pair visits a nearby cave, which used to be the lair of Bigs and Bluefur, in order to prepare it to be a human prison, the Rangers, at their Ultra Modes, appear to confront them. Although Rotox DX is more than strong enough to handle them on his own, Alice enters the fray as well and shows herself even more capable than her subordinate. When all seems lost to the heroes, Robo Knight arrives and attacks the machine duo after saying he will defend the Earth and all those who live on it. He teams up with the Rangers and successfully defeats Rotox. Metal Alice, although enraged, retreats, knowing she is now at a disadvantage. Although Vrak sends the Zombats to enlarge Rotox DX, he proves no match for the combined power of the Gosei Grand and Gosei Ultimate Megazords and is destroyed.

Metal Alice later attempts a different approach and creates another robot, R1C0, to inspect the Rangers. They befriend him and rename him Rico, unaware he is still controlled by Metal Alice. While trying to free him from her control, Alice herself shows up and forcefully converts Rico into a diabolical machination, prompting a battle. Although strong enough to battle the Rangers, Rico does not resist the commands of her mistress and only stops after the device on his chest is deactivated. Revolted by this turn of events, Alice enlarges Rico and orders him to attack, only for him to refuse, much to her dismay. Furious, Alice attempts to self-destruct Rico, only to be stalled by Robo Knight, giving the Pink Ranger, Emma Goodall, enough time to take Rico off the Earth and save him. With another failure, Alice retreats and is scolded by Vrak.

Later, she tries to derail a train to wreak havoc and terror and drive humanity to oblivion. However, thanks to the Rangers and Robo Knight, her plan is foiled. She engages in battle herself against them after enlarging and proves a mighty foe but not enough to overcome the combined strength of Gosei Grand and Gosei Jet. Although destroyed, she was rebuilt by Vrak, who claimed to still need her in the future.

After Admiral Malkor is defeated and the Warstar Ship is laid to waste, Metal Alice searches through the wreckage and salvages what remains of Vrak. She rebuilds him as a robot and the two launch another attack, almost destroying an entire skyscraper with a missile, intercepted by the Rangers in the nick of time. With Vrak in serious need of repair due to his injuries, they retreat to the lab and are greeted by The Messenger, a powerful robot and agent of the Armada. After Vrak is recovered, the trio once again battles the Megaforce. Nonetheless, they are forced to retreat due to the power of their enemies. Vrak fights them again on the same day and threatens them with mind games before backing off to contact the Armada along with The Messenger.

The next day, the trio lauches yet another onslaught, this time with each fighting the Rangers in turn after an initial attack of three Water Rotoxes and a myriad of Loogies. As Vrak falls after sapping the energy of the morphers, The Messenger takes his place and defeats the Rangers, only to discover that Robo Knight was not done yet and nullified his might long enough for him to restore the morphers of his teammates and, eventually, he malfunctions. The Rangers muster all of their strength to defeat The Messenger. Metal Alice then appears after Vrak tries to battle the Rangers in a critical state. She fights at her best but falls and explodes. Afterwards, the Armada arrives and Vrak abandons his comrades to their fate, with Metal Alice bursting into flames and The Messenger eventually running out of energy and deactivating, ending the robotic conflict with the Megaforce and giving way to the nigh-almighty Armada to destroy the planet. 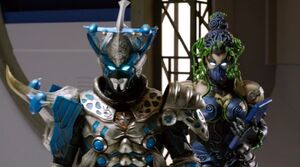 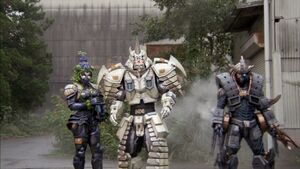