Leader of the Eggman Empire (formerly)

Conquer the world on behalf of his master.
Destroy Sonic and his allies.

Metal Sonic, also known as Neo Metal Sonic in his more regal form, is a major antagonist of the IDW Sonic the Hedgehog comic series. He is Sonic's robotic copy and rival, created by Dr. Eggman, and was the leader of the Eggman Empire for a time after the events of Sonic Forces.

Prior to the series, much like his video game counterpart, Metal Sonic upgraded himself to the more powerful form of Neo Metal Sonic, rebelled against his creator Dr. Eggman and took control of the Eggman Empire, plotting to copy the bio-data of Sonic and his friends as to empower himself and take over the world. However, his plot was eventually discovered, and he was defeated by the combined efforts of Team Sonic and their allies. Following this, Eggman removed Metal Sonic's rebellious streak to make him more obedient, and he would then clash with Sonic several more times afterwards.

With Eggman gone, Metal Sonic became the new leader of the Empire, yet, due to his programming, still believed that Eggman was the only one who could lead it. Thus, Metal Sonic assumed Eggman's identity using his shapeshifting to ensure his reign remained unbroken, planning to find and hand the doctor's identity back to him once he had successfully conquered the world.

One month after the war, Metal Sonic, still disguised as Eggman, made his first move by taking control of the wayward hordes of Badniks scattered across the planet, and directing them into more organized attacks on various villages. He then held a "trial" for Sonic (whom he kept a close eye on via a Flapper) by ordering a Badnik battalion to attack a village. Sonic, with help from Tails, emerged victorious, and so Metal Sonic decided to organize another attack to ambush him, also making sure to lure in core Resistance member Amy Rose so that they could both be destroyed. This plan also failed, however, and Metal Sonic, much to his annoyance, noticed that Sonic was deviating from his predicted path. Upon being informed of where Sonic was headed next by Orbot, Metal Sonic hoped that Rough and Tumble could finish him off.

Although the skunk brothers failed, Metal Sonic learned from surveillance footage that Knuckles was not guarding the Master Emerald on Angel Island, which meant his plans could accelerate significantly. While surveying his forces via Flapper, Metal Sonic caught sight of Sonic and the Chaotix before the Flapper was destroyed by Charmy Bee, making him suspect that his forces either found a new settlement or that Sonic had figured him out. Following Sonic and the Chaotix's encounter with Shadow the Hedgehog and Rouge the Bat, Orbot informs Metal Sonic that the Egg Fleet is getting into position, prompting him to join up with it to carry out the next phase of his plan.

When Sonic infiltrates the Egg Fleet to get information on Eggman's forces, he comes face to face with Metal Sonic, still using Eggman's identity. However, Sonic immediately dismisses the "faker" being the real Eggman, having met with him before and knowing he still has amnesia, causing Metal Sonic to reveal himself and demand that Sonic tell him where the real Eggman is. Sonic then begins to fight with Metal Sonic, but the latter gets the upper hand by copying his bio-data. Figuring he is outmatched, Sonic decides to escape, and Metal Sonic sends his forces to stop him.

Grabbing Sonic by the chest, Metal Sonic demands that he tell him where Eggman is, although he makes him break his grip and falls. Believing that Sonic has fallen to his death, Metal Sonic proclaims himself as the one true Sonic, before watching as he escapes with Tails and the Tornado. Metal Sonic orders the Tornado to be shot down, only to realize that Sonic had destroyed all of his cannons on purpose. Despite loosing Sonic, Metal Sonic proclaims that he has won, as he knows that Eggman is alive while his rival has gained nothing. Back at the Resistance headquarters, Sonic discusses his findings with Amy, Knuckles and Tails, and the four of them consider looking through Eggman's old files to find what plan he had yet to finish. Meanwhile, Metal Sonic and the Egg Fleet begin to launch an attack on Angel Island.

Later on, Sonic, Silver and Whisper break into one of Eggman's bases to uncover his unfinished plans, although they find that Metal Sonic is not trying to hide what he has planned. Sonic and Silver a then both are horrified to learn of Metal's intentions, contacting the Resistance base and demanding that Amy and Knuckles gather everyone in response. Meanwhile, Metal Sonic, who has captured the Master Emerald, monologues on how it's power can neutralize the Chaos Emeralds and that, whether he comes in as Super Sonic or not, Sonic will be powerless to stop him.

Metal Sonic again laments over his victory, stating that he has baited the "heroes" into giving him the last thing he needs for his ascension, while, as the same time, the Resistance formulates a plan to stop him. Blaze offers to confront Metal in her Burning Blaze form to take care of him quickly, however, Tails shuts down the idea, theorizing that he would either shut down her super form using the Master Emerald or copy her bio-data to empower himself. As the Resistance approaches the island, shoot their aircraft is shot down, leaving them to divide up; Sonic and Knuckles heading to the Master Emerald while Amy and the others battle Metal's forces. Sonic and Knuckles confront Metal on his throne built over the Master Emerald, but he is unconcerned with their threats and remains assured of his victory. As Sonic and Knuckles try to attack him, he uses the Master Emerald to transform into Super Neo Metal Sonic.

Neo dared the heroes to attack him in his new form before firing an energy blast between them. Sonic tells Knuckles to secure the Master Emerald while he distracts the villain. Unfortunately, Metal Sonic grabs the pair before they can do anything then drags them across the ground, smacks them into each other, and fries them both with energy blasts. Sonic and Knuckles try again to get passed Super Neo Metal as their allies manage to destroy the various Badnik forces and aircrafts that surrounded the island. However Shadow disobeyed his orders to remain with the group and instead went to confront Neo Metal Sonic directly. Neo meanwhile was disappointed with the fight his adversaries put up against him, saying that he didn’t even need to achieve his final form to defeat them before his is suddenly stabbed in the chest by Shadow's Chaos Spear, which caused his super form to dispel.

Shadow is about to finish the villain off when Sonic informs him that Metal Sonic can still copy his bio-data to gain power, although Shadow believes this would not be enough for Neo to transform. Chuckling, Metal Sonic casts a shield around himself and his throne before telling the trio that Eggman's upgrade removed the limitations to take on his final form. All he needed was bio-data from Sonic and Shadow, plus the Master Emerald itself. His shield then absorbed various materials in the area, growing to colossal size until it soon disappears to reveal the monstrous Master Overlord, who demands Sonic to bow before him.

In his colossal new form, Metal Sonic begins firing giant crystal shards at the heroes until he managed to grab all three of them as they tried to evade him. He then took flight announcing his intentions to make the trio watch as he destroys the Resistance and Angel Island before quickly slaughtering them. However, Metal was unknowingly playing into Sonic's own plan by taking them right to their support so they can distract the villain while Knuckles retrieves the Master Emerald stuck inside Master Overlord's body.

Sonic and Shadow soon break free from Metal's clutches and attack his wings to keep him near Angel Island (which was in free fall without the emerald's energy) while Tails hijacked one of the Egg Fleet's airships before open-firing on the mechanical monstrosity. The remaining Resistance members soon join in the assault as Tails prepares one final attack, but the infuriated Master Overlord flips over and knocks the heroes away. Silver uses his ESP to save them just as Tails rams Overlord with the airship, buying Knuckles enough time to obtain the Master Emerald and return it to Angel Island. The ship drives Metal Sonic back onto the island's surface where he reverts to his original appearance and is soon found by Sonic and Tails to be offline.

Metal Sonic was taken to a laboratory where Tails repaired what damage he could on him and chained him up so Sonic can try and talk to him. But upon activation, Metal immediately broke free of his restraints and attempted to attack only to fail due to his weakened state. Sonic tells his robot doppelgänger that there's no more point in fighting with Dr. Eggman gone and the Egg Fleet destroyed and says he is now free to do what he wants with his life. Sonic then offers to help Metal but the robot turns him down and makes a quick escape to one of Eggman's old bases.

Upon entering the facility, Metal Sonic finally finds his creator alongside Dr. Starline who is trying to restore Eggman's lost memories. Dr. Eggman (under the persona of "Mr. Tinker") notices Metal is in bad shape and goes to comfort him when the he suddenly remembers his time with Metal Sonic and everything else about his past; restoring his old personality. Now back to his old self, Eggman has Dr. Starline assist him in fixing up Metal Sonic and discovers the Metal's bio-data on Sonic and Shadow has been corrupted, preventing the robot from transforming again.

Regardless, Metal Sonic still desired revenge and traveled with Dr. Starline to Eggman's base on Frozen Peak where he waited ambush the heroes. Following a tip-off from Starline, Silver the Hedgehog arrives with Sonic at the old base and both are immediately attacked by Metal who throws Silver into the distance. Sonic exchanges a few blows with Metal and distracts him with some banter while Silver uses his psychic abilities to hold the robot in place. However, Metal is saved by Dr. Starline using the Warp Topaz to move him out of harms way.

The battle soon resumes and this time Metal moves too fast for Silver to hold him with his ESP. Instead, the hedgehog tosses Metal Sonic through the air to take him out of the fight temporarily. Starline then warps both Sonic and Silver off a cliff on the other side of the mountain before Metal returns and enters an open portal back to Eggman's current hideout. 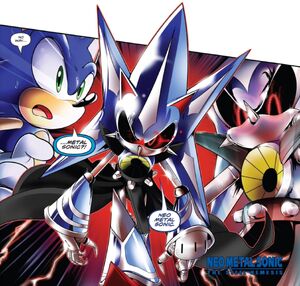 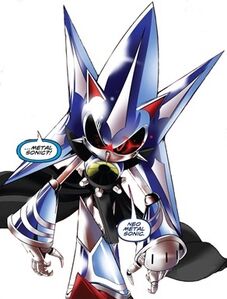 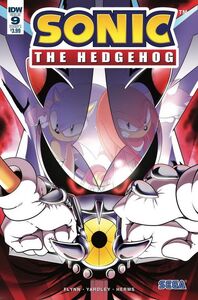 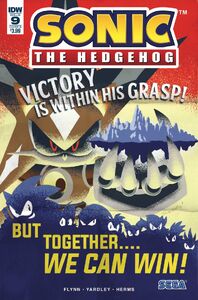 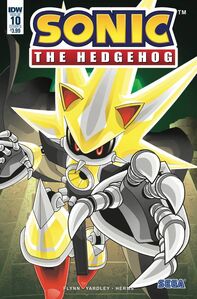 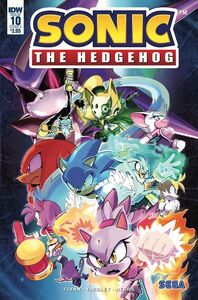 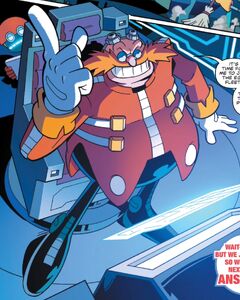 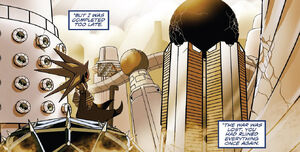 Metal Sonic realizing that he awoke too late. 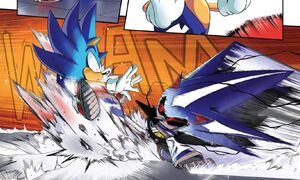 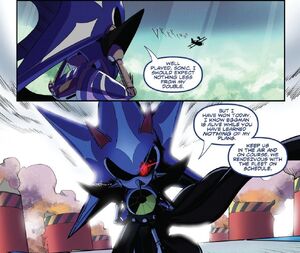 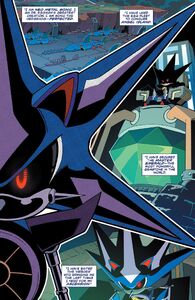 Metal Sonic reflecting on his conquest. 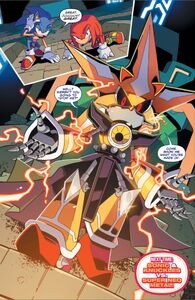 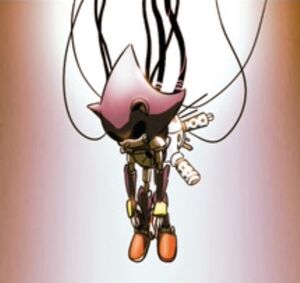 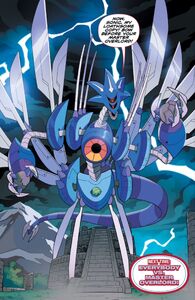 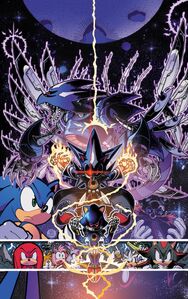 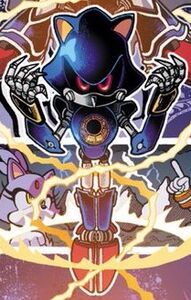 Metal Sonic's defeat as he lies beaten and offline.
Add a photo to this gallery

Retrieved from "https://villains.fandom.com/wiki/Metal_Sonic_(IDW)?oldid=4142341"
Community content is available under CC-BY-SA unless otherwise noted.