Bickering with each other.

Kill Mayor Manx and deputy mayor Calico Briggs for denying them their parole (the event which forced them to jail-break, ultimately led to their deaths and resurrected as cyborgs).

Vengeful Cyborg Spouses
The crime-bosses Mac and Molly Mange, the criminal couple were worst criminals of Megakat City and later escaped from Alkatraz. Now, rebuilt by Professor Hackle and becoming the Metallikats.

Originally a husband and wife team named Mac and Molly Mange, the Metallikats drowned when they were trying to escape from Alkatraz prison but their bodies were discovered by Professor Hackle's robotic servants and their minds were transfered into robotic bodies. The pair proceeded to become even more dangerous criminals, killing Katscratch before turning their attention to Mayor Manx - who they had a grudge against for denying their parole (though in reality it was Callie who denied the parole).

They have also allied with Dark Kat and Dr. Viper despite being order around by Dark Kat and sharing a hatred towards the SWAT Kats.

A Bright and Shiny Future

The Pastmaster brings Mac and Molly back to life, both form a alliance to rid themselves of the SWAT Kats and so they takeover the city together. The duo betrayed The Past Master and use his watch as a pocket watch. In the future, they took over the city and enslaving the any organic that's not a robot. Soon, they are defeated by the SWAT Kats, the Enforcers and Professor Hackle. Returning everything back to normal and remaining the evidence closet in their damaged state.

Mac and Molly attempted to rob the Megakat City's bank, they were defeated by The Enforcer and The SWAT Kats. Molly was badly damaged in the fight and tells Mac to get the loot, Mac loves her enough to saved her and retreated to their hovercraft. Mac robs Dr. Lieter Greenbox's creation to fixed him and saved his wife, the device rebuilt itself with their car as their minion aka "Zed". Zed absorbed Mac for being metal and Molly forced the SWAT Kats to help save her husband, Molly get absorbed and Zed corrupted Dr. Lieter Greenbox to become one being. After Zed defeat, Molly is back to normal and looking for her husband in the rumble of Zed. She finds Mac's head is merged to a food-processor and set him mix which shaking him. Mac gets dizzy and begs his wife to shut the blender, both remaining alive and back arguing with each other again. 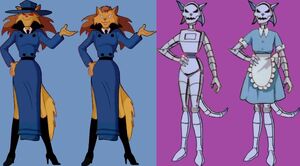 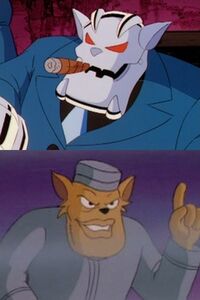