Attempting to kill and antagonize Superman.

Destroy Superman once and for all.

He was an infamous mercenary and hit man who would later become the cyborg Metallo after he was unknowingly infected with a rare disease by Lex Luthor's scientists. He then becomes one of Superman's deadliest foes as well as for the Justice League, joining Gorilla Grodd's Legion of Doom.

John Corben was originally a top-tier mercenary. At one time, he led a team of mercenaries to steal the Lexo-Skel Suit 5000 from LexCorp, a theft staged by Lex Luthor for the benefit of the Regent of Kaznia. When Lois Lane tracked the thieves to their ship in Metropolis Harbor, Corben caught her and prepared to kill her, but Superman intervened. To give himself a fighting chance, Corben mounted the Lexo-Skel himself and engaged Superman in a fight that raged across Metropolis, ending when Superman tore the suit apart. Although Luthor represented to the Regent's lawyer that he had fulfilled his part of the bargain by letting "the Regent's men" take possession of the suit, Luthor subsequently acted as though Corben had been working for him.

Corben was sent to Stryker's Island Prison, where he refused to give details on his employers. For this reason, his cell featured ample creature comforts and gourmet meals, supplied by an apparently-grateful Luthor. A few months after his imprisonment, he was shocked to be told that he was suffering from a rare and terminal viral disease found only in a small island in the South Seas. While looking at his prison record, Clark Kent was perplexed at how John Corben could have contracted this disease, not being native to the tiny island where the only cases are known. Lois Lane chalked it up to the fact that Corben was an international mercenary with outstanding warrants in several nations, thus it made better sense that with such globe-trotting, Corben would be more at risk for exposure to rare diseases.

Luthor helped Corben escape, and in exchange for his discretion, offered him a way to avoid death: LexCorp scientists would transfer his mind into an indestructible android body made of metallo, possessing strength equal to Superman's and powered by a Kryptonite heart. Feeling he had nothing to lose, Corben agreed. Upon the completion, Corben's android body was covered with a layer of artificial skin, which, aside from a rectangular seam which could expose his Kryptonite heart, allowed him to pass himself off as his original body. At first, Corben was thrilled with his new abilities, which allowed him to fight Superman nearly to the death. However, when he realized that he could no longer smell, eat or feel, he became disenchanted and abandoned the fight. Corben sought out LexCorp scientists, demanding that they make the "adjustments" they talked about when he awoke in his new body. However, the scientists confessed that they really meant Corben himself had to adjust to his transformation, which was irreversible. Upon hearing this news, Corben went insane, ripping away part of his artificial skin and officially adopting the identity "Metallo". Metallo angrily confronted Luthor on his yacht, who tried to reassure him that his condition could be fixed, given time. He went on saying that even if Metallo kills him, it would not satisfy him given his "practically immortal" nature, making him reconsider killing Luthor. Luthor then drives his yacht to a lab to repair Metallo's skin. On the way, Luthor tells him that while he'll repair Metallo's skin, he still needs to kill Superman to which the cyborg advises his boss to be patient as they both need to be given time. Just then, Superman arrived and revealed that Luthor had deliberately arranged for Corben to be infected with the disease, just so Luthor could use him as a guinea pig for the Metallo experiment. Metallo turned on Luthor, but Superman intervened. Luthor's yacht was destroyed in the battle, leaving Metallo stranded beneath the sea, but still alive.

Metallo resurfaced from the ocean on a volcanic island, having suffered amnesia after the explosion. His clothes and artificial skin had been completely disintegrated following the last battle, leaving him as nothing but a skeletal featureless android. He was found by two children, Sarita and Bobby Felix, who decided he was a "hero" because of his resemblance to their action figures. This idea of him as a hero was reinforced when Metallo did indeed perform a heroic act by shielding the two children from dangerous pyroclastics when the volcano unexpectedly burst. However, everything came back to him eventually, faster after Bobby shared his Superman toy with him. When Superman appeared on the island, helping with the evacuation from a volcanic eruption, Metallo attacked and nearly killed him. When the kids protested the action of their hero, however, Metallo was distracted enough to allow Superman to throw his Kryptonite heart into the flowing lava. Metallo desperately went after it, but wound up encased in the cooled lava unable to move or even see. Instead, he focused his mind on his identity, determined not to lose it again.

Metallo was eventually extricated by Intergang, who repaired and even improved his android body, in exchange for which he assisted in a series of bank robberies. When Superman tried to stop him, he severely weakened the Man of Steel with Kryptonite lasers. John Henry Irons, a former employee of LexCorp, donned a suit of armor and helped Superman defeat Metallo. This was the beginning of Irons' own superhero career as Steel.

Metallo later enlisted Tina, an intern at The Daily Planet, to kidnap Lois Lane in order to help him lure Superman into a trap. Fortunately, Jimmy Olsen learned of this and went to the Metropolis Junkyard to rescue him. Metallo and Superman battled again in a demolition machine, resulting in Metallo apparently being crushed by falling debris.

Metallo survived once again, however, and returned to Metropolis to join a group of disgruntled villains who had all been previously defeated by Superman including Livewire, Toyman, Kalibak and Weather Wizard. In their fight with the Justice League, Metallo was beaten by J'onn J'onzz, though Toyman seemingly succeeded in killing Superman. Fortunately, this later turned out not to be the case.

When Grodd founded his expanded Secret Society (which was heavily based on the Legion of Doom), Metallo joined its ranks. One of his missions was to accompany Silver Banshee to the underground world of Skartaris and assist the dictator Deimos in exchange for a large chunk of Kryptonite. However, a League team composed of Green Lantern, STRIPE, Stargirl, and Supergirl, intervened on behalf of Travis Morgan's resistance. He surprised Stargirl and beat her senseless after she defeated Deimos. Then in battle with Supergirl, Metallo lost an arm when Supergirl stabbed his shoulder with Stargirl's staff. He continued battling Supergirl, who eventually grabbed a knife and removed Metallo's Kryptonite heart, leaving the mercenary paralyzed. Metallo was taken to a cave where he was briefly interrogated by Green Lantern. At first he refused to talk, but Lantern pointed out that without his Kryponite heart, his body would shut down within the next few minutes, even seconds. Metallo was about to talk, but his mind was mysteriously shut down by an unknown source (It was actually Gorilla Grodd, who would shut down the minds of anyone who betrayed him). His motionless body was later taken to the Watchtower, to see if J'onn could probe what was left of his mind for information. Metallo's ultimate fate is unknown. 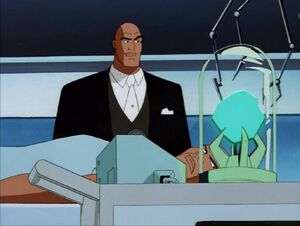 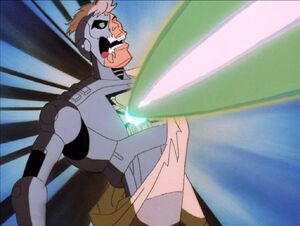 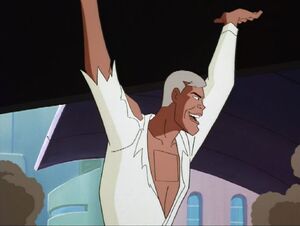 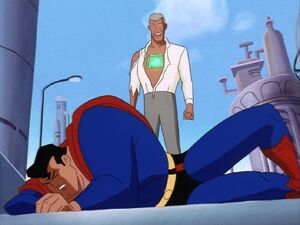 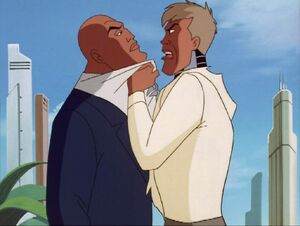 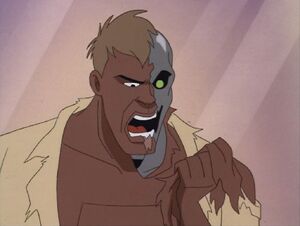 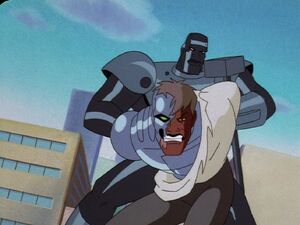 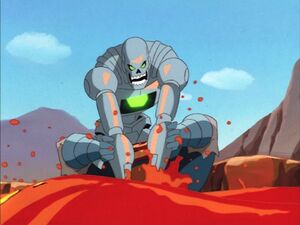 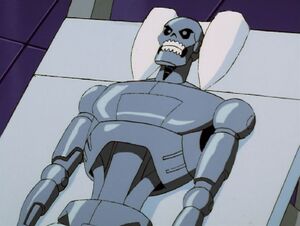 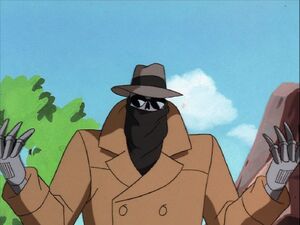 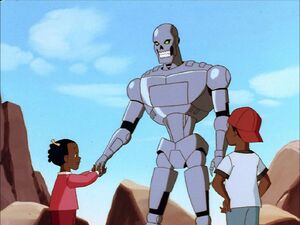 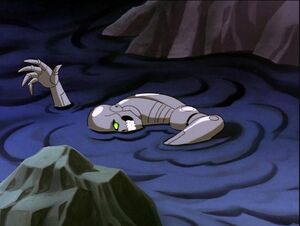