Metallus first appeared in the 1960s Space Ghost series. There he appeared as a galactic space conqueror who had an armada of killer robots and missiles ready to invade a nearby planet, but was thwarted. In another episode, Space Ghost's pet monkey, Blip, removed Metallus' head to find that there was nothing underneath. He later joined the Council of Doom to help destroy Space Ghost, but ultimately failed.

In the comedic series Space Ghost: Coast to Coast, Metallus could not speak English, instead speaking in a low, garbled metal reverb. However, the other characters seemed to have no problem understanding him. The character vanished in later seasons with an in-character audio commentary from the Space Ghost: Coast to Coast Volume Two DVD explaining that Metallus died at some point alongside Lokar. However, they both returned in the Season 11 episode "Stephen", in where they are shown to be alive and well.

Space Ghost and his team begin a dig but are ambushed by subterranean monsters. While their team's heroic monster, Igoo does battle with the monsters, the team hurries deeper into the caves until they meet with a race if creatures that appear to be in metallic armor. The creatures are led by Metallus. Metallus has his people restrain the team. Once restrained, Metallus exposes the team to Troglostars, parasitic creatures that eat non-biological tissue, as Space Ghost and their team have their suits warn away, Metallus explain his people's origin. The Metallites were once a survey team hired by the Space Force - Space Ghost's people. The survey team were sent to harvest a treasure trove of an element the Force had dubbed, Element Zeo. Though the Force was able to fend off the monsters, a massive cassum prevented them from getting out and soon the Troglostars found them and began eating away at their suits. With their suits compromised, the team began to get new properties. Their bodies dissolved and they became living phantoms. They were ethereal, and could fly, no longer saw, heard, touched, smelt, or tasted in the traditional sense, gaining an empathic view of their surroundings. While this gave many of the team great sense of freedom, they soon found that extended time as living spirits dissolved them. Metallus returned to his armor and was able to retain himself. Some of Metallus's people though projected for too long and dissolved into nothing, the rest were able to get back to their armor but not as quick as Metallus and are less intelligent. Metallus directs his people, reminding them of who they are and helping give them itineraries. With Space Ghost's arrival, Metallus sees the Space Force is still around and aims to escape the caves to pay them back for abandoning them. Thanks to Igoo, one of the crystalline monsters that the team originally ran from is killed and used as a stepping bridge to get over the chasm. Metallus leads his people out as the Troglostars continue to feast on the bound team. Space Ghost breaks free of his restrains after several minutes left alone and then blasts the Troglostars off his team, with ice beams to freeze them rather than kill them, saying the creatures are just following their base instincts. Though the teams’ suits have been compromised Space Ghost assures them they can treat the infection later before their begin to mutate as the Metalites did. When they escape, they find Metallus and his people have already boarded a Space Force cruiser and taken to a Space Force satellite. Metallus is outraged to find it appears completely empty. Space Ghost upon arriving explains that Space Force is gone and has been for years. He implores Metallus to leave his grudges with him in the depths of the caves and to move forward. Metallus, with no other outlet for his rage strikes at Space Ghost. The rest of Space Ghost's team fight the Metallites, who without Metallus to guide them or disorganized, knocking them out of their armor causes them to dissipate quickly and die. Soon enough Space Ghost destroys Metallus's armor leaving him as a living phantom, but with no inhibitor, Metallus's blast ruthlessly blast Space Ghost without mercy. After a few minutes though Metallus cannot maintain his shape and he begins to dissolve. His wrath unresolved. Space Ghost mourns the team and hopes they find peace in a true afterlife. 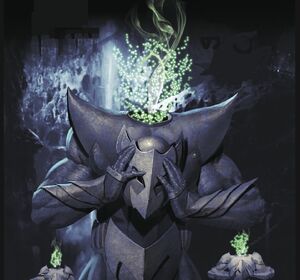 Metallus and his people within their armor. 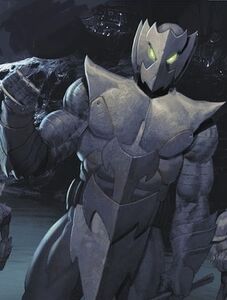 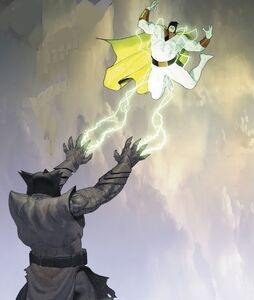 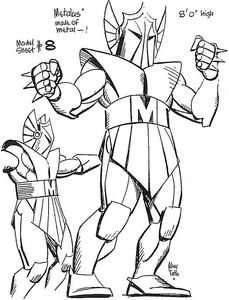 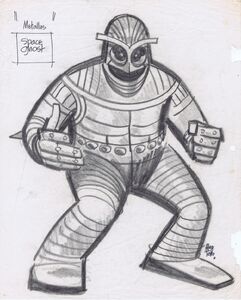