Exterminating enemies of the Daleks.

The Metaltron is the nickname given to a Dalek that was the only living exhibit at Henry Van Statten's Vault and it served as the main antagonist of the Doctor Who episode "Dalek".

The Metaltron was a Dalek soldier that fought in the Time War against the Time Lords. At some point in the war, it fell through time and crash landed on Earth around 1962. It was recovered and ended up in the possession of several collectors over the next 50 years before being purchased by Henry Van Statten, who nicknamed it "Metaltron". Locking the Dalek in his Vault as a part of his collection of alien artifacts and technology, Van Statten desperatly tried to get the creature to speak to him, eventually resorting to torture, though all it would do was scream.

In 2012, The Ninth Doctor and his companion Rose Tyler picked up a distress signal and landed in the Vault where they are introduced to Van Statten who takes the Doctor to see Metaltron and puts him in the room it is in. After discovering that Metaltron is a Dalek, the Doctor panics when it recognizes him and tries to shoot him only to find that its gun is not working much to the Doctor's delight who reveals that all the other Daleks died in the Time War thus making Metaltron the Last Dalek before trying to kill it but is stopped by Van Statten's guards.

Later Rose along with an employee of Van Statten's, Adam Mitchell come into Metaltron's room and it tricks Rose into touching it's casing, causing it to absorb her DNA and breaks free and starts killing some of Van Statten's soldiers before pursuing Rose and Adam. The two go up stairs thinking it cannot reach them but are shocked when it levitates up the stairs after them. Eventually Rose gets trapped with Metaltron after the Doctor seals the doors of the Vault but it finds that it cannot kill her as absorbing her DNA gave it emotions (which Daleks do not have except Hate) so instead it holds her hostage and threatens to kill her if the Doctor does not open the doors. After the doors are unsealed, Metaltron arrives in Van Statten's office and prepares to kill him for torturing it but Rose convinces it not to kill him before accompanying it to the highest part of the Vault where Metaltron opens it's casing, revealing the mutant and basks in the sunlight just before the Doctor arrives with an alien gun and prepares to shoot the Dalek, but Rose pleads with him not to do so, saying that Metaltron has changed as it could not kill her or Van Statten. Upset of what it has become, Metaltron asks Rose to order it to self-destruct which she at first refuses but eventually does and watches as it self-destructs. 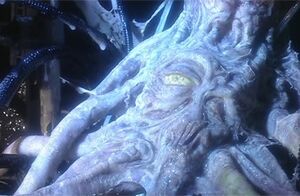