Mutant
The Monitor of Metaluna

The Metaluna Mutant is the main antagonist of the 1955 film This Island Earth.

A member of the slaves belonging to Metalunians, Exeter, compared the species to earths insects, though with moderately greater intelligence. Most of their bodies are covered in a teal colored exoskeleton. Their exposed brains are one of the more vulnerable parts of their body, and the human Cal Meacham was able to momentarily incompasitate one by striking its head. Like humans their blood is red. When the planet was coverted into a star only one survived by sneaking into Exetar's ship. It did however disintigrate when leaving Metaluna's atmosphere.

Dr. Cal Meacham is flying to his laboratory in a borrowed Lockheed T-33 Shooting Starjet. Just before landing, the jet's engine fails, but he is saved from crashing by a mysterious green glow.

At the lab is an unusual substitute for the electronic condensers that he had ordered. Instead, he discovers instructions and parts to build a complex device called an "interocitor". Neither Meacham nor his assistant Joe Wilson have heard of such a device, but they immediately begin its construction. When they finish, a mysterious man named Exeter appears on the interocitor screen and informs Meacham that he has passed the test. His ability to build the interocitor demonstrates that he is gifted enough to be part of Exeter's special research project.

Intrigued, Meacham is picked up at the airport by an unmanned, computer-controlled Douglas C-47 aircraft with no windows. Landing in a remote area of Georgia, he finds an international group of top scientists already present, including an old flame, Dr. Ruth Adams. Cal is confused by Ruth's failure to recognize him and suspicious of Exeter, his assistant Brack and other odd-looking men leading the project.

Cal and Ruth flee with a third scientist, Steve Carlson, but their car is attacked and Carlson is killed. When they take off in a Stinson 108 light aircraft, Cal and Ruth watch as the facility and all its inhabitants are incinerated. Their aircraft is then drawn up by a bright beam into a flying saucer. Exeter explains that he and his men are from the planet Metaluna and are locked in a war with the Zagons. They defend against the Zagons with an energy field, but are running out of uranium to keep it running. They enlisted the humans in an effort to transmute lead to uranium, but time has run out. Exeter takes the Earthlings back to his world, sealing them in protective tubes to offset pressure differences between planets.

They land safely on Metaluna, but the planet is under attack by Zagon starships guiding meteors as weapons against them. The defensive "ionization layer" is failing, and the battle is entering its final stage. Metaluna's leader, the Monitor, reveals that the Metalunans intend to flee to Earth, then insists that Meacham and Adams be subjected to a Thought Transference Chamber in order to subjugate their free will, which he indicates will be the fate of the rest of humanity as well upon Metalunan relocation. Exeter believes that this is immoral and misguided.

Before the couple can be sent into the brain-reprogramming device, Exeter helps them escape. Exeter is badly injured by a Mutant while he, Cal and Ruth flee from Metaluna in the saucer, while the planet's ionization layer becomes totally ineffective. Under the Zagon bombardment, Metaluna heats up and turns into a lifeless "radioactive sun". The Mutant has also boarded the saucer and attacks Ruth, but dies as a result of pressure differences on the journey back to Earth.

As they enter Earth's atmosphere, Exeter sends Cal and Ruth on their way in their aircraft, declining an invitation to join them. Exeter is dying, and the ship's energy is nearly depleted. The saucer flies out over the ocean and rapidly accelerates until it is enclosed in a fireball, crashes into the water and explodes. 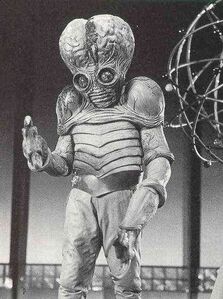 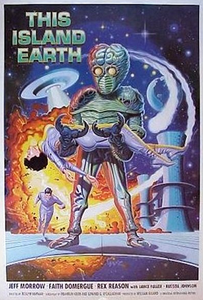 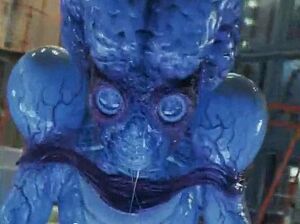 The Metaluna Mutant in Looney Tunes: Back In Action. 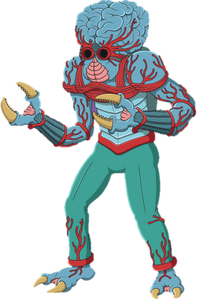