Complete Operation: Duplicate and eliminate all non-plant life in the galaxy (failed).

The Metarex (in Japanese: メタレックス) are an army of robotic aliens whose motive is to control the galaxy, and are led by Dark Oak. They serve as the main antagonistic faction in the final season of the anime-animated television series Sonic X, replacing Doctor Eggman in the process; unlike Eggman, however, the Metarex had everything laid out in advance so that they could both protect vital operations and attack enemy worlds at the same time.

Led by Dark Oak, the Metarex seem to have one motive: to control and rule all over the galaxy. They are similar to the Black Arms and Dark Oak is similar to Black Doom from Shadow the Hedgehog. Moreover, the regular soldiers look similar to the common Black Arms soldiers. Most of Dark Oak's lieutenants are also known to take their names from different trees. All in all, the Metarex are unquestionably vicious and dangerous as they'll do everything just to destroy all planets in the galaxy - even if it means losing part of their army.

The Metarex's origins are as mysterious as their motives. They have traversed the galaxy, stealing the so-called "Planet Eggs" and objects of great power, leaving whole worlds dead or dying in their wake. Among their victims are Cosmo's homeworld, along with every member of her species except her. They also implanted Cosmo with a hidden sensor in her brain, turning her into an unwilling spy.

The Metarex have a plan known as Operation: Duplicate. A large part of this plan involves creating Chaos Emerald duplicates, with the power of the originals. These copies, however, seem to phase out after use. This plan also involves using Chaos Energy to mutate Planet Eggs, growing them to unusual sizes. Their plans also include wiping out non-plant life in the universe, leaving plants to rule. The leaders of the Metarex are, in truth, male Seedrians, which means that they are of the same species as Cosmo. Their robotic-like shells were created by using Planet Egg energy, from their own planet, for the result of a crystallized evolution. Dark Oak and his commanders are the only Metarex who are not entirely mechanical; while their soldiers are automatons, the commanders are simply encased in thick armor.

Ultimately, the Metarex goal is the galaxy's Forestation — the eradication of all life except that of plants. To achieve this, the Metarex need the Planet Eggs and Chaos Emeralds to supply water and light. So nourished, they require the power of an event that occurs once every thousand years in the center of the galaxy. With the energy, the Metarex would be able to wipe out all non-plant life.

Some Metarex are very powerful, too strong for Sonic the Hedgehog and his allies to defeat without assistance from either an ally, some sort of device, or a Power Ring. There are multiple types, and they appear in every environment. Many Metarex wield a blade weapon of some type, and most come equipped with missiles as well.

In addition to Dark Oak, the Metarex commanders and Scarship, numerous other Metarex were featured in the course of Sonic X. Most of these are nameless, but a number have designations. 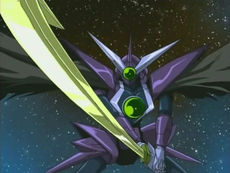 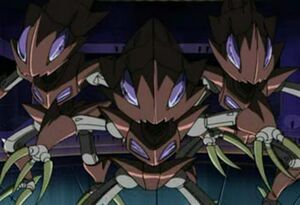 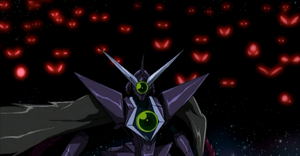 Dark Oak with his army of Metarex. 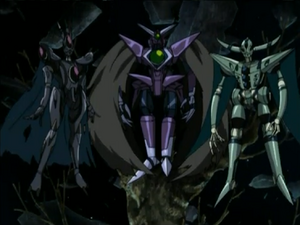 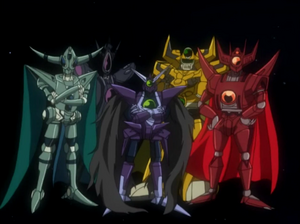 The Metarex commanders, the first Metarex to come into existence.