Mechanically Modified Villain
The Metatron is the final boss and main antagonist of the 2003 videogame Spawn: Armageddon. This preternaturally charged hi-tech suit of armor is an alternate-form of Spawn's archenemy the Redeemer. It is said to be the ultimate manifestation of the Redeemer's power and thus displays a range of powers that the Redeemer does not normally utilize in battle as well as having a radically new appearance and mindset.

The Redeemer takes on the form of Metatron in an attempt to slay Spawn once and for all so that he may charge up and activate the Angel Space Station's laser and spark the final stage of a war between Heaven and Hell, thus bringing about Armageddon and effectively ending Hell at the expense of both Earth and its inhabitants: an event Spawn can not allow to happen.

Metatron first appears as a large scorpion-like creature capable of firing blue energy at Spawn while attack with his tail and pincers if Spawn gets to close: he can also fire short-ranged beams of energy from his pincers.

Metatron's scorpion form can also fire a large blast of energy at Spawn but must remain immobile whilst doing so.

Once he starts taking damage Metatron places a shield around himself and summons small enemies known as "Metablades" - once the "Metablades" are slain his shield disappears and he becomes vulnerable to attack once more.

After defeating his scorpion-form Metatron will morph into a giant robotic humanoid - in this form he is much stronger and can fire blasts of energy, jump randomly at a target for great damage and a shockwave effect.

Despite his great power, the lastMetatron was ultimately defeated by Spawn and thus the world was saved from destruction, though it is unknown of the Redeemer could be able to gain this form again or not in the future.

The Metation appears in the comics

as a female angel and the queen of all Angels. 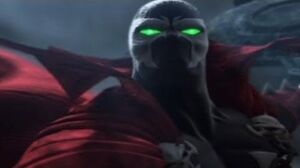 Spawn Armageddon Walkthrough - Ending - Mission 24 The End Of The World? (Spawn Vs. Metatron)