Metroid Prime is the titular main antagonist and final boss of the game of the same name. It is a Metroid that has been highly mutated by constant exposure from Phazon. It would later be reborn as Dark Samus for the second and third Metroid Prime games.

In its exoskeleton, Metroid Prime resembles a giant insect-like creature with six appendages, pincers on its forelegs, a huge maw, and various beam and projectile weapons at its disposal. As its Core Essence, Metroid Prime is transparent, with a blue membrane that stretches into six tentacles, three overdeveloped nuclei, and a featureless face with glowing orange eyes.

The Chozo, a species that inhabited the planet Tallon IV, foretold a prophecy that a "worm" would infest their planet, devour it from within, and bring along with it a "great poison". However, a great "Defender" would appear to confront the "worm".

Eventually, the prophecy came to pass - a Leviathan from Phaaze smashed into the planet, spreading Phazon, the "great poison". Sometime after this, a single Metroid wandered within the Leviathan, and was corrupted when it absorbed large amounts of Phazon in the Phazon core.

As the Phazon spread, the Chozo became corrupted, and either fell under Metroid Prime's control or lost their sanity. The remaining Chozo built a temple to contain the Leviathan, the "worm", and the Phazon itself. Calling it "The Cradle", they created twelve relics, called "Cipher", that would allow access to the impact crater where Metroid Prime lurked. However, Space Pirates landed on the planet and were able to steal some of the Chozo Artifacts, which caused the Chozo to scatter the rest across the planet.

The Space Pirates eventually found Phazon on the planet and gained access to the Impact Crater through mining. They then began mining operations on the planet to obtain more Phazon, using it for their experiments on both themselves and other creatures, including Metroids. According to NTSC-version Space Pirate Data, Metroid Prime was discovered in a cavern by a mining crew. It quickly killed the miners, though it was able to be contained by security units and drones. Studies were then conducted on the Metroid. They discovered that it is genetically similar to a Metroid, though much more "evolved". It has a limitless capacity for Phazon and is not affected by the substance. It never stops growing and has some psychotic behavior, likely due to the Phazon.

Metroid Prime was at one time kept in a stasis tank. There was a large batch of Phazon in the room it was in and, sensing it, destroyed the tank and consumed all the Phazon. It also managed to assimilate several weapons and defense systems from fallen security units and began using its new weapons against the Space Pirates. They were able to contain it, though they were unable to remove the equipment, making them an integral part of Metroid Prime's body.

In the PAL-version of the game, however, the Space Pirates on Tallon IV were merely aware of the presence of some creature within the containment field of the Cradle. They also detected it fed on Phazon.

The Chozo came to the conclusion that Tallon IV was doomed to destruction. Before they left, they saw visions of Samus Aran exploring the planet. They left behind upgrades for her battle suit in hopes that one day she will fulfill the prophecy. They then left the planet.

Eventually, Samus Aran landed on Tallon IV after destroying a Space Pirate frigate. Exploring the planet, she managed to collect the twelve Chozo Artifacts and various upgrades for her suit, including the Phazon Suit, which made her invulnerable to Phazon radiation. Possessing the twelve artifacts, she managed to enter the Impact Crater (after fighting off Meta Ridley) and discovered Metroid Prime. After defeating it in battle, it shed its armor, revealing its true form-Metroid Prime Core Essence. After defeating it, the Core Essence manages to absorb Samus' Phazon Suit before it was destroyed. Samus managed to escape the Impact Crater before it exploded.

Sometime afterward, Metroid Prime is reborn from the Phazon Suit, which contained Samus' DNA. Forming into Dark Samus, it became more powerful than ever. 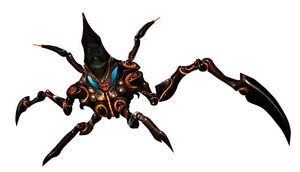 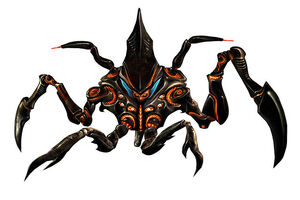 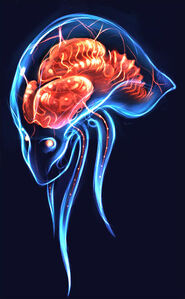 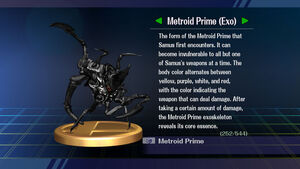 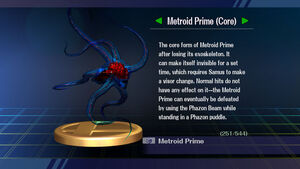 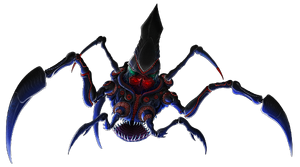 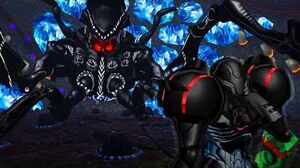