Nazi piece of shit. (by Zussman)

SS-Oberscharführer of the Nazi Party

Abusing and torturing prisoners of war.

Force his prisoners of war to work and kill any of them who are Jewish.

SS-Oberscharführer Metz is the main antagonist of the 2017 video game Call of Duty: WWII. He is a Nazi officer and the director of a labor camp located in Stalag, Germany, where he was torturing and abusing every prisoner there.

He was voiced by George Hubertus Regout, who also performed the motion capture.

Little is known about Metz's early life before he joined the Nazi Regime, other than he was possibly from Austria and had served in World War I (as indicated by his medals). When the Nazis came to power in Germany, Metz served as a kommandant in the army and was eventually posted at a concentration camp in Stalag. During World War II, Metz became notorious for his brutality towards American prisoners of war and forcing them into hard labor, especially those who were of Jewish background.

When American soldier Robert Zussman, who was secretly Jewish, is captured in December 1944, he is taken to a German Labor camp and is interrogated by Metz on which of the prisoners are Jewish. When Zussman refuses to comply, he is beaten and put on a train to a labor camp. On April 4, 1945, after the 1st Infantry Division continue searching for Zussman for months, they find the camp where he was being held at and witness the horrific atrocities that Metz and his men have committed against the Jewish prisoners, including mutilations and executions.

When William Pierson finds a trail leading out of the camp, they realize the Nazis led the prisoners on a death march, leading Red Daniels and Pierson to head deep into the forest to find Zussman. Metz soon begins executing prisoners, the gunshots alerting Daniels to his position. Daniels finds Metz throwing Zussman to the ground ready to execute him with his gun, but Daniels shoots and kills him before he can fire his weapon. His body was left behind in the woods. 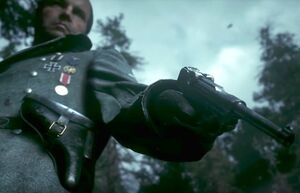 Metz about to execute Zussman. 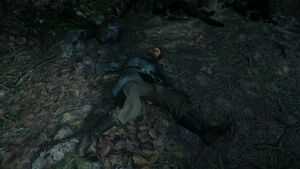 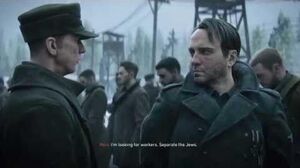 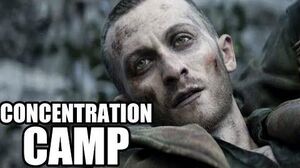