Mevia the Enforcer (by Telltale Games)

Enforcer of the Old Builders

Co-hosting, commentating and watching the games.

Watching the competitors lose and suffer.
Throwing "TNT tantrums" (according to Sebastian).

She was voiced by Kari Walhgren.

Mevia is a member of the Old Builders. She, together with Hadrian, Otto, and Harper, built the Portal Network and invented the Games. They used to have competitors travel from all over to play in the Games.

However, in time Hadrian and Mevia grew more power hungry and sadistic. They started to make people fight against each other, just for sport. Losers in the Games were forced to work in the mines, until they got another shot in the Games. Unknown to anyone, the Games were rigged, so nobody could win. Presumably, for that reason, Harper left.

When Harper and the New Order of the Stone arrived at the Games to retrieve the Portal Atlas, she thinks that they should make their lives miserable, for fun. But when Jesse presented the Redstone Heart (that Harper took when she left), Hadrian offered a deal: if Jesse won the Games, he/she and his/her friends would get the Atlas. Mevia also helps announce and commentate the Lava Race and, like Hadrian, is clearly surprised and disappointed if Jesse wins.

When Jesse was at Hadrian's palace, he/she found out that (presumably under Hadrian's orders) Axel and Olivia, two of Jesse's best friends were kidnapped by Mevia from their homeworld to use to blackmail Jesse. Hadrian and Mevia also knew that Jesse had a best friend called Reuben and, as such, tried to kidnap him too, but, clearly not knowing his fate or even his species, Mevia kidnaps a Minecon Usher from Episode 1 who is coincidentally called "Reuben". Hadrian sadistically uses them in a deal against Jesse.

Mevia is next seen during the finale, helping announce and commentate the final game, which is a game of Walls. Much like Hadrian, Mevia is dumbfounded and outraged when, thanks to Jesse, the competitors refused to fight each other and decide to rebel. She, Hadrian and Otto head down and confront them. Due to them having stepped on the Victory Platform and technically won the Games, Otto tries to give Jesse the Atlas as promised, but Mevia and Hadrian trap him and all the competitors except for Em, Jesse and (determinant) Slab in obsidian. Em runs away, much to Mevia and Hadrian's delight. They both begin to fight Jesse (and determinantly Slab). Mevia eliminates Jesse, but thanks to his/her friends, after he/she respawns, he/she returns with diamond weapons and Tim's armor. They fight once more before Jesse manages to defeat Mevia, before defeating Hadrian. They both respawn and are beaten up by the Gladiators.

Jesse then uses the Atlas to banish Mevia, along with Hadrian, to a world filled with either zombie-sized chickens or chicken-sized zombies. Mevia tries to crack a pun about their predicament, much to Hadrian's dismay. If they are surrounded by zombie-sized chickens, Hadrian fires Mevia after hearing her pun. If they are surrounded by chicken-sized zombies, Hadrian simply says “Not your best work, Mevia.”

Meanwhile, Otto (and determinantly Harper) restarts the Games (due to some competitors actually enjoying them) and makes them fun again, while those who don't want to compete can return home, undoing the damage Mevia and Hadrian caused.

Being the Enforcer of the Games, Mevia is a greatly argumentative, overwhelming and obnoxious character. She is portrayed to be a right-hand woman to Hadrian and usually goes along with what he says, and shares his attitude of superiority, often also insulting Jesse and his/her Gang during the process. She is also very sadistic, as she enjoys belittling and taunting people she considers to be lower than her.

Much like Hadrian, Mevia is extremely rude, snarky, snide, unpleasant, power-hungry, ruthless, vindictive, cruel, arrogant, selfish, hot-tempered, immoral and sadistic. Both show no motives for their evil deeds aside from for their egotistical entertainment, as well as showing no redeeming traits whatsoever (excluding Mevia aside, unlike Hadrian). However, Mevia doesn't have Hadrian's tendency to make and break deals and manipulate people. It can be said that while both enjoy watching the competitors in the Games suffer, Hadrian prefers to toy with their hopes, while Mevia simply enjoys watching the Games and the competitors suffering.

As mentioned above, Mevia is highly sadistic, as evidenced by her quote: “They're cheaters… Let's make their lives miserable, for fun.” She seems to have little, if any respect, for others, Mevia shows no remorse for the competitors, enjoys taunting them and even pushing and yelling at Hadrian. If Jesse chose to talk with Sebastian instead of being on time to Hadrian's palace, Sebastian implies that Mevia and Hadrian take their anger out on and abuse the competitors trapped in the mines, saying that it's easier for them (the miners) when they (Mevia and Hadrian) are happy. Despite this, the two of them fight quite well together, as shown during their final battle with Jesse. At one point, Hadrian pretends to ask Jesse for forgiveness while Mevia sneaks up behind him/her and brutally murders him/her, showing that, like Hadrian, she has no sense of honor and is perfectly willing to attack someone while their guard is down.

Despite all of this, Mevia also has a comedic side, as shown during the post-credits scene which shows Mevia and Hadrian trapped in a barren world made of bedrock inhabited by (depending on one of the player's choices in Episode 1) either chicken-sized zombies or zombie-sized chickens. Mevia tries to crack a joke about their predicament, which falls flat. 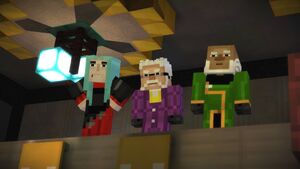 Mevia standing beside Hadrian and Otto. 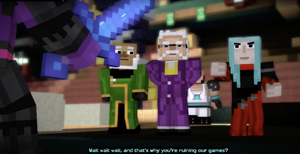 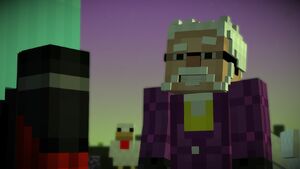 Hadrian and Mevia trapped in the world of zombie-sized chickens (determinant). 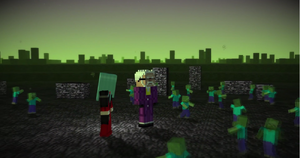 Hadrian and Mevia trapped in the world of chicken-sized zombies (determinant). 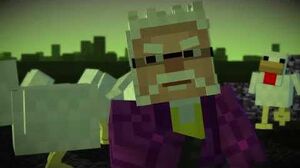 Minecraft Story Mode - Zombie-sized Chicken
Hadrian and Mevia while being trapped in the world of zombie-sized chickens, depending on the player's choice. 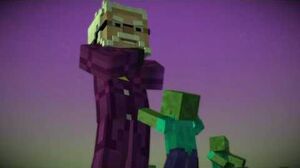 Minecraft Story Mode - Chicken-sized Zombies
Hadrian and Mevia while being trapped in the world of chicken-sized zombies, depending on the player's choice.