To exterminate all humans, create an army of clones (anime, past). None (present)

Mewtwo is a psychic genetic Pokemon cloned from Mew, the Legendary Pokemon ancestor of all Pokemons. Interestingly Nintendo considers Mewtwo the main antagonist of Pokemon. Mewtwo can be considered evil, but more misunderstood because it was the way he was created and Mewtwo is later Redeemed and helps the main cast.

Mewtwo was created by Team Rocket by cloning DNA from a Mew fossil. It was Team Rocket's intention to create the most powerful Pokemon. However, Mewtwo was angered by the team as he heard that he was to be controlled by them, and that he may not be part of God's creation (Japanese version), and in his fury, destroyed the lab where he was created with his intense psychic powers. He then allied himself with Giovanni under the promise of learning to control his powers, although he later rebelled from Giovanni after learning that Giovanni's claim of partnership had been a lie, and he had already been sickened by Team Rocket's actions towards pokemon. Believing humans as oppressors of Pokemon, he vowed to exterminate humans and all Pokemon that sided with them, believing it to be his "purpose". He also wishes to exterminate Mew, as he believed he was vastly superior to his genetic counterpart. He eventually saw the errors of his ways shortly after Ash Ketchum sacrificed himself to stop their fighting, and removed their memories to avoid being tracked down.

His backstory was expanded upon, where he interacted with several clones of a charmander, squirtle, bulbasaur, as well as a clone of Amber, the daughter of Dr. Fuji. He was eventually distraught over his friends, especially Amber's premature death, which also resulted in the scientists injecting him with a serum that removed his memory of her, which is strongly implied to have impacted his behavior in the film.

Mewtwo makes an appearance as the secondary antagonist in the Special: The Mastermind of Mirage Pokémon. However, in this version, Mewtwo is a Mirage Pokemon created by Dr. Yung.

Mewtwo appears as the ultimate adversary of Red in Pokémon Origins. As in the games, it is encountered in Cerulean Cave after defeating Blue. In a hard battle that wiped out almost all of Red's Pokémon, Mewtwo is defeated by Charizard after it Mega Evolves into Mega Charizard X. With Mewtwo captured after several tries, Red then had all 150 known Pokémon.

In the manga he was created during the Red, Blue, and Green story arc by the Gym Leader and Team Rocket's former scientist Blaine who used one of his own cells in the process though as a side effect whenever Mewtwo fights it causes Blaine immense pain due to the cellular connection with Blaine. Mewtwo first appeared attacking Blaine and it was only with Red's strategy that Mewtwo is caught in a Pokeball.

In the Yellow arc by this point he and Blaine have become good friends and fight alongside Yellow against Lance of the Elite Four, but Blaine was forced to call him back before he died due to their connection, though Yellow with Red's Chu (Pikachu) would use the same strategy Mewtwo tried earlier to win.

In the Gold, Silver, and Crystal arc during the Gym Leader completion, thanks to the powers of Entei's holy flames, Mewtwo's connection to Blaine is severed to where Mewtwo can now fight without affecting his creator, allowing him to leave Cinnabar Island and be free.

In the FireRed and LeafGreen arc Mewtwo reappears and aids Red, Blue, and Green against Deoxys and Giovanni.

In the main Pokemon games, Mewtwo is only encountered in Cerulean Cave, with no real storyline significance. He is seen at level 70 in Red, Blue, Yellow, FireRed, LeafGreen, HeartGold and SoulSilver.

Mewtwo also has a role in some of the spin-offs. In Pokemon Mystery Dungeon - Red/Blue Rescue Team, he is at the end of a 99 floor dungeon. He attacks Blastoise & Charizard and can be fought as a boss after Ho-oh has been recruited.

Mewtwo plays a bigger role in Pokemon Ranger: Guardian Signs, where he is the main Pokemon used by the main antagonist, Dr. Edward. It is controlled by the use of the golden armour. After being defeated the first time, Purple Eyes enhances and controls Mewtwo and uses it himself.

Mewtwo is highly skilled with Psychic powers. It can levitate through use of telekinesis, speak telepathically, and Control Control take control of another living being's mind. It has a powerful signature move, Psystrike, and it is also known for its powerful Shadow Ball and Aura Sphere. Mewtwo is also capable of wielding various types of attacks (but to a lesser extent than Mew). To exert its powerful psychic abilities, it will stay motionless for long periods of time in intense concentration to raise its capabilities to their maximum power.

In the Pokémon Adventures manga, Mewtwo fights with a highly skilled combination of Psywaves and a giant spoon for long range and close range battles, respectively.

In the anime, Mewtwo also has the ability to telekinetically create a massive hurricane and is constantly protected from harm inside a reflective sphere of psychic energy. In the English dub, it is claimed that the hurricane was powerful enough to destroy the planet, as well as Mewtwo being able to block a Pokémon's "special abilities." Mewtwo can also "communicate" with humans via telepathy, and was also capable of instant regeneration, allowing him to survive what would normally be fatal blows. This was especially evident when a computer, deducing Mewtwo as a threat shortly after bursting out of its containment field, shot Mewtwo with a laser that was potent enough to temporarily kill Mewtwo, only to regenerate from its wound and revive itself, as well as it regenerating from a flamethrower blast. According to the dub of Mewtwo Returns, his psychic abilities were ineffective against automated machines.

PDVD 107.PNG
Mewtwo as he appeared in Pokemon: The First Movie

Mewtwo in Mewtwo Strikes Back

Mewtwo in his mechanical armor Mewtwo overlooking a city at the end of Mewtwo Returns. 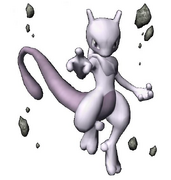 Mewtwo in the sixteenth Pokémon movie 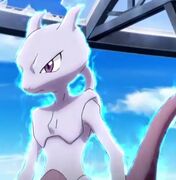 Mewtwo about to transform 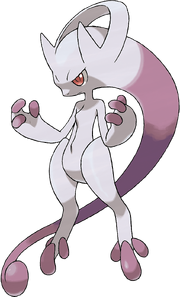 Mewtwo in Pokemon Origins
Add a photo to this gallery
Retrieved from "https://villains.fandom.com/wiki/Mewtwo?oldid=586582"
Community content is available under CC-BY-SA unless otherwise noted.