She was portrayed by Honoka Maki in her human form and voiced by Yukana in her Greeed form.

Mezool, like the rest of the Greeed, was created 800 years ago through the Core Medals. Along with the others, Mezool was sealed in a stone coffin until 2010, when Ankh removed the petrified OOO Driver. As they embark on their quest to find their Core Medals, Mezool keeps Uva and Kazari from fighting as she uses her Yummies to nourish them all with Cell Medals. But later, while aiding the other Greeed in a planned attack to ambush Kamen Rider OOO to reclaim all their Core Medals from him, Mezool is robbed of all but one of her Core Medals thanks to Kazari, making her revert into her human form as she was forced to go into hiding.

The next day, finding Gamel having absorbed her Core Medals after being tricked into it by Kazari, Mezool talks him into letting absorb him to regain her full form. However, though she was barely keeping herself stable, Kiyoto Maki added Uva's Core Medals into her to cause her to transform into a mindless chimera called a Mega Greeed. With aid from Kamen Rider Birth, OOO gets Uva's medals to assumes Gatakiriba Combo to destroy Mezool with her Core Medals divided among Uva and Kazari. While Uva kept her Medals with him, Kazari absorbed Mezool's Core Medals to have his Yummies have an aquatic animal element.

Eventually, Uva resolved to revive Mezool and Gamel, the two subsequently betraying him and joining Kazari's side. Some time after Ankh obtains their Core Medals, he enables Mezool and Gamel to assume their complete forms. However, spurred by Maki noting her relation to him is only a facade, Mezool leaves Gamel to achieve her desire by trapping mother/child pairs in Yummy eggs to suck out their love. Though she overpowered OOO in Latorartar Combo, the Kamen Rider destroys her using the Toride Vendor and the Medagabryu.

Her Full Greeed form was later used by Foundation X as a template for powerful fakes to attack Kamen Riders OOO and Fourze before the two freed the Legendary Seven Riders from their prisons.

She was destroyed by Riderman's Rope Arm.

Mezool became part of the revived Dai-Shocker assembled by Decade to wipe out the Super Sentai, ensuring the survival of the Kamen Riders. After Dai-Shocker's alliance with Dai-Zangyack was revealed, both organizations were wiped out by a gathering of Kamen Riders and Super Sentai. Before the battle, she is seen fighting the Goseigers with Weather Dopant, Llumu Qhimil, Doras, and Apollo Geist. She is later seen fighting Red1 of Bioman.

True to her nature as a Greeed, Mezool is extremely greedy, avaricious, materialistic, and full of an unquenchable thirst for possession that leads to consuming the world if unchecked. Though she is somewhat sympathetic and loyal towards humans, Mezool seemed to be the most kind of her fellow, serving as a mother figure to Gamel. However, this is a farce as she desires to know and feel true love.

"Mezool" comes from the Japanese word mezuru, which is a reference to her desire and Mezool's Yummy growing from the obsession of the host. 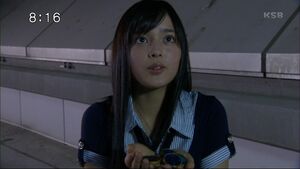 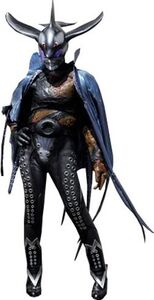