Head of the Institute for Advanced Biological Study

Stop mankind from rising as an intelligent race (failed).

Zaïus, better known as Mi Zaïus, is, alongside the other apes, one of the main antagonists of the 1963 Pierre Boulle novel La Planète des Singes, with the novel being known in English as The Planet of the Apes/Monkeys (the most literal translation), Planet of the Apes, or Monkey Planet.

He is a male orangutan that, while not the only antagonist in the book, starts the novel's true conflicts and is the biggest obstacle for the main human protagonist, aside from the ape society.

Zaïus is a scientist, and thus a thinking creature, quite smart and logical, as far as his understandings and beliefs reach. He rarely admits to be wrong and will be embarrassed when he actually is, since it's something of a rarity for him. Zaïus was shown to be quite cruel and monstrous, mainly when he declared that all humans should be exterminated, though he only said this when the possibility of the humans overthrowing the apes was brought up and made convincing, using that same fear the ape society shared to try to kill the intelligent humans.

He shows no feelings towards any man, as he thought they were soulless, and was satisfied whenever he reduced the ones that showed signs of intelligence to feral animals in fits of rage through his experiments.

Mi Zaïus was originally head of the Institute for Advanced Biological Study, with the title "Mi" denoting a rank of honor in his planet (dubbed Soror by the human protagonists), where his kind, the orangutans, rule as scientists and politicians.

One day, he was informed by one of his workers, the human specialist, psychologist and veterinarian Zira that she had found a man capable of thought and speech, just in a way that was different to how apes communicated. Unknown to them at the time, this was Ulysse Mérou, an astronaut who had arrived to their planet a year ago or so, much different from the more primitive humans on their planet who were more feral and unable to talk.

Zaïus, who did not believe the fact that man could have a soul or a spirit, dismissed the female chimpanzee's claims, and, to prove his point, the orangutan subjected Ulysse Mérou to various tests and exercises. The tests proved that the man was intelligent, the most intelligent one they had ever found, much to Zaïus' embarrassment.

As Ulysse showed more of his intelligence and learned more of this ape world, its society and its language, Zaïus' theories that he was only a bit smarter than the average human on the planet due to a former period of captivity and a highly developed animal instinct were ignored, and was later dismissed from his post as head of the Institute and replaced by Cornélius, Zira's fiancé.

After the discovery of an ancient city with shocking revelations and the experiments of the chimpanzee Hélius concerning man, Zaïus began scheming with the other orangutans, the Grand Council, against Cornélius and Ulysse.

When Ulysse's son Sirius was born, due to an experiment in which Zarïus had forced Ulysse to mate with the primitive woman Nova (who eventually became rational like Ulysse thanks to Hélius' experiments) the Grand Council of orangutans planned to place the boy under Zaïus' charge to ensure that a new race of intelligent men did not become a reality, but Ulysse and his family were able to escape the planet with the same spaceship he had used to get there. 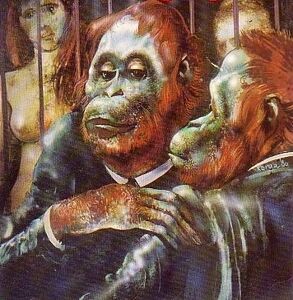 Mi Zaïus and another orangutan in the cover of a Hungarian edition of the novel. 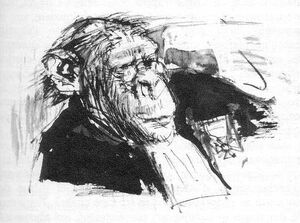 A illustration of Mi Zaïus as a chimpanzee by Jacques Pecnard for an illustrated French version of the novel from 1971. 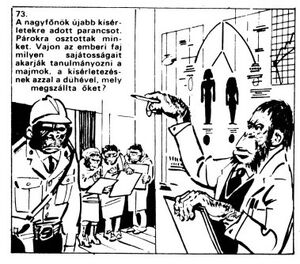 A illustration of Mi Zaïus as a chimpanzee by Erno Zorad for the 1981 Hungarian novel comic adaptation. 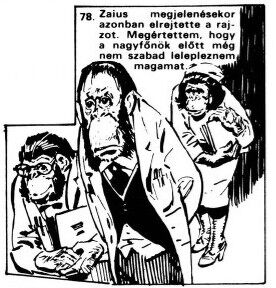 Retrieved from "https://villains.fandom.com/wiki/Mi_Zaïus?oldid=4173553"
Community content is available under CC-BY-SA unless otherwise noted.