Torture and kill the protagonists (under Taker of Souls' influence, succeeded in all except David).

Kill the Abomination (as Mia, succeeded).

Mia is the central antagonist of the 2013 Evil Dead reboot film due to being the deadite and the conduit of The Taker of Souls' influence for other deadites at the beginning of the film. While Mia is not a generally mean person, she becomes possessed by the Deadites, causing her to serve as the main antagonist of the film until being exorcised by David via burial.

Mia makes a complete turn in the end and becomes the main protagonist (filling the role her brother left behind) and is the one who kills The Taker of Souls. Mia is based on Cheryl Williams and Ash Williams.

She was portrayed by Jane Levy.

Mia, David, Olivia, Natalie, and Eric, go to Mia's parents' cabin in the woods. There, she decides to play "cold turkey" and dumps her heroin supply down into a well. When she's suffering from withdrawal effects, she smells something dead in the cabin, though no one else can seem to smell it. When the dog, Grandpa, begins to sniff the rug, they move it and find a bloodstained cellar door. In the cellar, Eric and David find dead cats hanging from the ceiling, and the Naturon Demonto (Book of the Dead) near a shotgun on the table. When Eric and David return upstairs, Mia admonishes them for bringing the book and the shotgun out of the basement.

When Eric reads a passage from the book, Mia sees a woman in a white dress calling her name in the woods. She runs inside, telling David and Olivia that she needs to get out of the cabin because she is going insane. Olivia tells her that they are not going to let her leave, because they think that she needs to stay in the cabin for a few days so that she can get clean, to which David agrees. Furious and feeling betrayed, she steals Eric's car key, climbs out the bedroom window and hijacks Eric's car. Driving down the road, she sees the woman in white in her path, and swerves out of the way only to crash right into a swamp, knocking her out.

After regaining consciousness and escaping the wreck, she is chased by an unseen force, and she is eventually tripping and falling into a vine pit . As she becomes trapped by vines that has thorns that seem to go in her skin, she sees a possessed version of herself that chokes up a bloody thorny vine that goes up Mia's dress causing her to become possessed. Afterwards, David finds her curled up in front of an oak tree, scared out of her mind. Back at the cabin, she tells David that she thinks that there is an evil force in there with them, but everyone passes this off as an attempt to get out of the cabin because of withdrawal. David later goes into the cellar to remove the dead cats, taking the bag of cats outside, he finds Grandpa, their dog fatally wounded by a hammer. At the moment there is a flash back of Mia beating Grandpa, a few minutes later Grandpa dies. David goes inside the cabin to find Mia, Olivia then tells him she's in the shower. Mia burns herself badly in the shower by turning the hot water on full blast, fulfilling part of the Book's prophecy. David begins to drive her to a hospital, but is stopped when he finds that the road has become flooded by a river of fast moving water that is impossible to cross. Back to the cabin, Mia walks out of the room with a shotgun found earlier, and shoots David in the shoulder with a shotgun, when he demands her put the gun down. Seconds after, the unseen force bursts through the cabin door and flies to Mia. She screams as a demonic voice (implied to be Cheryl Williams), taunts the group, and remarks "You're all going to die tonight" in multiple simultaneous voices before falling to the ground. David tells Olivia to grab the shotgun but Mia grabs Olivia's arm as her eyes turn blue to yellow as she tackles her.

She proceeds to vomit a river of blood all over Olivia's face. Olivia throws her into the cellar and Eric locks her in. Shortly after, Olivia goes off to clean herself up, but is then possessed by the demon. Said in the book, Olivia skins off her face with a shard of the mirror as a worried Eric finds her in the bathroom. Olivia attacks him with the shard of mirror and stabs him multiple times with a syringe. Injured, Eric manages to stay alive and kills her with a shard of toilet bowl by bashing it on her head multiple times. David then treats his injuries and tells Natalie to get supplies from the kitchen. Natalie, hearing noises coming from the cellar, goes off to look. She is tricked into entering the cellar by the possessed Mia. Attempting to escape, Natalie is dragged into the cellar by an unseen force. When she tries to defend herself with a box-cutter, Mia bites on her left hand and grabs the box-cutter from her. Mia uses the box-cutter to split her own tongue before kissing Natalie, but is interrupted by David, who forces them apart. The demon in Mia then states that Mia's soul is "being raped in hell." Angry, David chains the cellar shut.

Later, Natalie's hand becomes infected as it grows throughout her arm. She grabs the electric knife, intending to cut it off, but the possessed Mia opposes, only to cackle when she does it anyway. Meanwhile, Eric tells David that once the evil consumes five souls, the sky will bleed once again, and the dark one shall rise from hell. He also tells him that the only way to save Mia's soul is to kill her, either by an alive burial, bodily dismemberment, or purification by fire. David is hesitant at first, until a possessed Natalie attacks the two men with a nailgun, then she uses a crowbar to continue her attack and almost beat Eric to death. As the possessed Natalie attempts to kill Eric, David finally shoots in her other arm and blows it off with the shotgun. Natalie, who is no longer possessed, asks David, "Why are you hurting me?" and " Why does my face hurt?" then dies from blood loss, in David's lap. After a while, David brings Eric outside the cabin. David, making up his mind, decides to douse gasoline all over the cabin to burn the place down. However, when he decides to burn the cabin, Mia begins to sing a lullaby when they were both young as children. Upon hearing this, David finds it impossible to kill her. Instead, he plans to bury her outside the cabin and collects a few supplies. A moment later, he goes down into the cellar to capture her, but she ambushes and attacks him. She then shoves his head underwater and begins to drown him. Suddenly, Eric appears and hits her over the head, knocking her unconscious, but not before getting stabbed by Mia's box-cutter. David, now saved, mourns Eric's death.

As David begins to bury Mia, she wakes up as herself, telling David she couldn't breathe and panic. David continues to bury her, knowing if he releases her, she will attack him. Upon her death, David digs her back up and proceeds to revive her with defibrillators made from a car battery, seemingly unsuccessfully. David laments over the loss of his sister and walks away. Mia, free from the possession, awakens and calls his name, and the two embrace. After a short reunion, David tells her to wait by the car while he goes back inside to get the car keys. Inside, he grabs the keys, catching an eye of a picture of Mia, Eric, Olivia and him sitting on a couch, smiling at the camera. When David continues to turn around with a sorrowful look overcoming his face, he gets stabbed in the neck with a screwdriver by a possessed Eric. David manages to escape as Eric watches him. Mia, seeing her brother injured, attempts to escape with him, but he opposes and proceeds to push her out the door and lock it. Despite Mia's screams, David shoots the canister of gasoline inside, igniting the whole cabin in flames.

A grief-stricken Mia cries, but finds the buckthorn necklace that David had given her. When she picks it up, the sky begins to rain blood. Suddenly, a hand shoots up from beneath the ground and grabs her wrist. Mia pulls away, frightened as she witnesses the Abomination rising from the ground. She then goes and runs to the car, but drops the keys while she tried to start the engine. The Abomination, breaking through the window, grabs and burns her leg, causing Mia to escape through the other door. Panicking, she crawls through the small hole where Grandpa, the dog, was found and finds her way to the supply room, where she obtains a chainsaw. The Abomination, finding her, attempts to attack Mia as she squeezes herself between a shelf and a wall. Injured in the shoulder and knee, Mia breaks herself out from the supply room, crawling underneath the car. As she starts up the chainsaw, the Abomination approaches the car, and loses both of her legs by the chainsaw. Mia manages to slip out from underneath the car, but The Abomination flips the car, as it crashes onto Mia's left hand, forcing her to rip it off to escape. As the Abomination approaches, Mia picks up the chainsaw and shoves it into the Abomination's face, slicing her in half through body. It sinks back within a pool of blood in the ground as the blood rain ceases. Mia picks up the buckthorn necklace and wears it as she processes through the recent events before limping away. Just when dawn breaks over the blood-drenched woods, it reveals that the book that has started everything, flips itself closed. It is unclear whether the Abomination is defeated or if the cycle will be repeated. 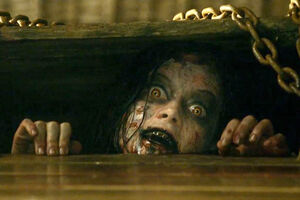 Were gonna get You...

Mia killing The Taker of Souls.