My Lord (by Zachariah)

Ruler of the Apocalypse World (formerly)

Michael is a major antagonist appearing in the CW horror/action television series Supernatural, serving as one of two main antagonists in Season 13, alongside Lucifer, and the main antagonist in Season 14. He is the apocalypse universe version of Michael that killed that universe's version of Lucifer in their battle during the Apocalypse and perpetrated a genocide of humanity thereafter, attempting to be more of a God than his father.

Michael later invaded the main universe and made a deal with Dean to possess empower the latter to kill the main universe Lucifer, subsequently breaking this deal, taking over Dean's body completely and resolving to destroy their universe and every other one to spite God, who had long forgotten about Apocalypse World, planning to take Him out as well.

He was portrayed by Christian Keyes as Michael's original vessel, Jensen Ackles while possessing Dean Winchester, Felisha Terrell whilst possessing an unnamed woman, and Ruth Connell when possessing Rowena MacLeod.

This Michael appears to share his counterparts dislike for Lucifer and took pleasure in murdering his own brother. He was eager to grant the same horrible fate to the Lucifer who had traveled from the main reality and considered the chance to do a "good thing". However, though his counterpart admitted his love for his younger brother, this version of Michael seemed to have no such feelings.

He is very ruthless as he didn't hesitate to engage and torture Lucifer and Mary Winchester, an innocent human. He was not above harming his own subordinate after he failed in his efforts to get Jack to open a rift. Michael even attacked the young Nephilim for his defiance against him. He appears to know of his own cruelty as he stated team free will though he was bad after he was defeated by Jack and Lucifer stole the latter's powers.

He is quite power hungry as after discovering that the pair came from another world and seeing it from reading Lucifer's mind he was very eager to invade the prime world. When it comes to his own world he is incredibly wrathful and oppressive to the point where his own subordinates are terrified of him. Further evidence to his ruthless personality, as mentioned by a bounty hunter, Michael is also willing to kidnap people himself or his angels see as useful and enslave them to do his bidding and he also had no qualms with initiating and leading a war of extermination on the human race, killing billions of innocent people in the process. Even Lucifer, a highly ruthless and malevolent being in his own right showed to be disgusted with him to the point that he outright called him "pure evil".

He also appears to be somewhat sadistic as he was shown taking pleasure in taunting and torturing Lucifer and chose to torture him in a cage simply due to Lucifer's fear of being imprisoned. When ordering Zachariah to kill Mary in front of Jack, he even told him to "make her feel it", with a somewhat gleeful expression on his face. He also promised Kevin Tran entry to Heaven if he were to act as a living bomb to kill Jack's friends in order to break the latter's spirits of being unable to protect everyone even if he won. When he saw Gabriel, he was surprised to see him but had no qualms in fighting and soon killing him and smiled proudly as Gabriel's essence burned out and at the latter's dead body. Before Gabriel tried to fight him however, he appeared to be genuinely pleased and surprised to see his younger brother before realizing they were not the same. He also took care in laying his younger brother to the ground rather than tossing it down, showing a level of care and gentleness for his younger brother even after killing him. He also told a vampire that he intentionally let her go to serve as bait for the Winchesters and friends before killing her since she was no longer useful and smiled at her corpse.

He is unlike the main reality Michael who still loved his brothers was more compassionate and only wanted to kill Lucifer as God told him to and would take no pleasure in it as he told dean. This is in great contrast to this version of Michael's view towards Lucifer as he admitted to enjoying killing his brother. Ramiel even stated that Lucifer was the only angel the main version of Michael had ever wanted to kill.

Lucifer considers this Michael comparable to his own version of his brother as he stated that when he puts his mind to something he'll do it, no matter who has to do die to make it happen. This was seen when Lucifer told Castiel that nothing will stop Michael's invasion which goes along with his order to Kevin Tran to find another way to open a rift after Lucifer escaped. According to Mary Winchester, Michael was going to kill her in front of Jack if he didn't comply with his demands and when Jack escaped along with Mary before this could happen, Michael immediately sent his forces to recapture him, while telling them to kill Mary in front of Jack and make her feel it. He also warned his subordinates not to fail him, further showing his desire to get what he wants. Michael was also willing to make a deal with Lucifer to get to the other world, despite his previous attempts to kill him.

Having seen the state of Apocalypse world, Castiel describes him as "much, much, worse" than the main version of Michael in his talk with Duma.

He is also quite manipulative as he promise Kevin that when he let's Kevin into heaven, he would get to see his mother again in his effort to convince Kevin to turn himself into a suicide bomb: keeping him in the dark that in reality, all that Kevin would experience in Heaven was memories.

He does not seem to have any personal loyalties, as he seemingly had no qualms in abandoning his faithful army of angels to invade earth with Lucifer despite leading them for centuries. While he was able to inspire absolute loyalty into his angels, he likely had little regard for them. In his first appearance, he approached Lucifer after the latter killed five of his angels and showed no anger towards Lucifer for killing them and only seemed concerned with finding out how Lucifer was still alive. However, he did express nostalgia when talking about his universe's Castiel and stating that he was disappointed with the main reality's version of him, showing he did acknowledge his siblings.

After reaching the main universe, Michael showed a desire to cleanse it of humanity but to do a better job than he had done in his own world. He was not above admitting that he had made mistakes with his actions In his own world but only intended to improve upon his methods rather than stop. He also stated that he enjoyed killing humans, expressing to Dean that it was beautiful when the soul leaves the body and wanted Dean to be his first victim.

Michael also shows disgust for humanity, as he belittled a human for wanting love and peace, despite his past. He even told two werewolves that he respects monsters for their desire to simply eat and offered them a chance to join him in his army. However, he was willing to let the Alternate Kaia join him, in exchange for her spear but did attack her after her refusal to help him.

He is condescending and looks down on those he sees as beneath him, this is best seen when he referred to himself as the better one than Gabriel when talking to a praying man. He showed this side again, when he spoke to a Reaper and told her of the enslavement of her race in his world, which left her shaken.

However, despite this, Michael displays a level of honor, as even though he could have just simply fully taken over Dean, kill Lucifer and do the same to Jack and Sam, he instead honored the conditions of their deal for a time, allowing Dean to use his powers to fight Lucifer. Only after Dean succeeded in killing Lucifer did Michael betray Dean and go back at their deal and he also spared Jack and Sam, likely implying he saw sparing them as being the replacement of his not taking over Dean. In addition, Michael looked clearly furious and shocked when Lucifer and Jack arrived despite having made a deal with the former, implying had they stayed out of his way, he would have allowed them to go wherever they want and not do anything to them. 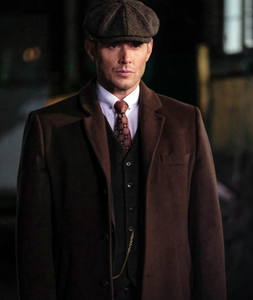