Uncle Michael (by his niece Sarah)

Fading of the Cries

Writing (formerly before his family were killed).

Reading.Loving his sister Maggie and his niece Sarah.
Focusing his newfound powers.
Contemplating the loss of his wife and his daughter.

Avenge the deaths of his wife and daughter by killing the drunk driver who murdered them.

Protect Sarah from harm's way with his magic powers.
Protect the Rune of Seralean from the necromancer Mathias.

Michael is an important tragic character and also once the minor villain in the 2011 fantasy horror film Fading of the Cries. He was a former novelist who is the uncle of Sarah and the brother of her mother Maggie. He lost a family when his wife and daughter were killed in a car accident which drove him almost into suicidal depression while he blames the drunken driver who was there at the accident before killing him several months later. He does this and avenged his family's murders was because of a journal with occult secrets he learned to take his vengeance. It later cost him his life, when his life essence would be sacrificed to summon a demon that is one of the 3 devils who serves the necromancer whose journal has the same history and magic writings.

He was portrayed by Thomas Ian Nicholas, who is best known for his portrayals such as Henry Rowengartner in the 1993 sports comedy movie Rookie of the Year, Calvin Fuller in both A Kid in King Arthur's Court and A Kid in Aladdin's Palace, and Kevin Myers in the American Pie comedy film franchise.

15 years ago, the young author Michael lost a wife and a daughter who both died in a hit-and-run. The drunk driver responsible for the deaths of his family, survived and was arrested but later was released due to a technicality. Michael swore to avenge his family and kill their murderer.

Several months since their deaths, Michael moved to Eckly Manor, an empty mansion in a small farmland town to live close to his divorced sister Maggie and gain support. During his stay, he discovered a journal filled with sercret occult writings that even aided in his possible vendetta against the man he blamed for the deaths of his family. He succeeded and summoned 2 demons, Malyhne and Sylathus.

He succeeded at last by tricking the drunken man to come to Eckly Manor for a drink and executed his death. Later he was betrayed by the 2 demons when their true master returned.

He came quickly to his sister's house and secretly used some of his magic to form a mystical aura around his beloved niece Sarah as he bestows a protection spell upon her. Michael was fearful for his safety so he returned to his home in Eckly Manor, and began drawing a magical symbol on the floor to protect himself. However, Malhyne stepped out of the darkness and began dragging him backwards, Mathias then appeared and introduced himself.

Michael was unafraid of Mathias, so he said that he knew how to end the sorcerer. Mathias laughed as Michael stabbed him; feeling no pain. Mathias evaporated into dark smoke; vanishing. As Michael quickly scratched the protective pentagram, Mathias appeared suddenly behind him, shoving him with his staff. Mathias then announced how he would proceed to grow in power; and summoned Sylathus to brutally pummel Michael. "Careful, Sylathus," Mathias warned, "I shall have use of him - What is left of him," the evil sorcerer snickered, as Sylathus pummelled a dying Michael.

Mathias then used his awesome powers upon his return to the town to both send out his two of his three faithful demon servants to hunt down Sarah and Jacob, and to temporalily control an army of the dead during night to kill them too. He sought after the Rune of Seralean, a centuries-old amber amulet worn by Sarah whom he told her that it is Michael's fault he stolen it when he first found it at the Eckly Manor, therefore Mathias cursed Michael's bloodline including Sarah and her family before she and Jacob escaped.

During the final battle at the Eckly Manor, Thurah, Mathias' third and final servant was defeated and slain by Jacob, thus freed the tortured soul of Michael whom Thurah possessed in order to be ressurrected and under Mathias' complete control. Jacob then rescued his second niece, Sarah's young sister Jill from Mathias' wrath and destroyed the necromancer's recovered amulet to end his merciless reign of terror.

Michael's sister Maggie and her first born daughter Sarah were unfortunately not spared of Mathias' wrath as they too died of the attacks by the necromancer's undead puppets. 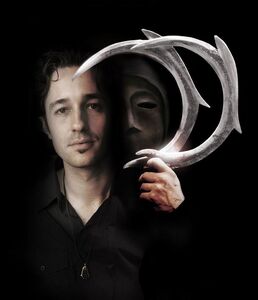 Michael possessed by the demon Thurah.

Michael who already lost his family, now seek the powers of the dark arts to avenge their deaths. 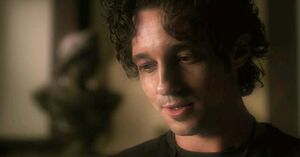 Michael who cleverly deceived the drunk, told him of his family car accident and the the man involved with it.

Michael becomes angry at the man who is responsible for the murders of his wife and daughter.
Add a photo to this gallery
Retrieved from "https://villains.fandom.com/wiki/Michael_(Fading_of_the_Cries)?oldid=3731718"
Community content is available under CC-BY-SA unless otherwise noted.