Leader of the Host of Heaven (formerly)

Michael is an antagonist appearing in the CW television series Supernatural, serving as the overarching antagonist in the show's fifth season, and an anti-hero in the fifteenth and final season.

Once again, Michael appears at Season 13, but this time, he comes from an alternate universe who seeks to conquer the main universe. However, the alternate version is more chaotic and ruthless, even controversially more powerful than the original Michael claimed by Lucifer and eventually he appears as the main antagonist in Seasons 13 and 14.

Michael is the first, and the most powerful, of the four Archangels, the older brother of Lucifer, Raphael, and Gabriel.

In Season 15, this version of Michael finally escaped from Lucifer's Cage after God threw open all of the doors in Hell. Having changed from his time in the Cage, Michael loses much of his antagonism and even shares control with his vessel Adam Milligan. He later allies with the Winchesters against God after learning the truth, though he refuses to directly fight his father. After God wipes out all other life on Earth, Michael agrees to help directly, but later betrays the Winchesters in an effort to once more become God's Favorite. Enraged by Michael's earlier betrayal, the archangel is obliterated by his father.

He was portrayed by Matthew Cohen and later Jake Abel (who also played Luke Castellan in the Percy Jackson films), because of his ability to possess people. In season 13, his alternate self is portrayed by Christian Keyes and later Jensen Ackles (who portrays Soldier Boy in The Boys, and also played Jason Teague in Smallville, Tom Hanniger in My Bloody Valentine 3D and voiced Jason Todd in Batman: Under the Red Hood) while possessing Dean Winchester.

Michael sees himself as a good and loyal son to his father, and that matters most to him. Despite his love for Lucifer, Michael insists that he is only serving his father by destroying his brother. He seems to think himself magnanimous when he promises to leave Dean whole and not catatonic, after serving as a vessel and by erasing John and Mary Winchester's memories of their ordeal with Anna.

His insistence that his actions merely serve God is not absolutely true, as he blames Lucifer for the loss of their father and is furious with him. He also becomes furious with anyone who interferes with his destiny, including Anna Milton and Dean at Stull Cemetery. When Lucifer suggested that they refuse to fight and "walk off the chessboard" Michael considered abandoning his destiny for a moment, before staying steadfast in his resolve to fight Lucifer. It is this stubborn insistence on fulfilling his story as written that leads him into imprisonment in the Cage.

Though Michael cares about humanity in general, he was willing to potentially sacrifice half of the population of the world to defeat Lucifer like he believed God wanted. When talking to Zachariah about his final plan to convince Dean to say "yes," Michael showed little care for the humans who died in the bar Zachariah was drinking in as a result of Michael appearing in his true form. However, after a diner full of people witnessed Michael smite Lilith, he simply erased their memories of the incident rather than takes more drastic measures, showing that he is not needlessly cruel nor does he needlessly take a human life if he can avoid it.

Michael's relationship with Lucifer is stated to mirror that of Sam and Dean's. While talking with Dean, Michael professes love for Lucifer, even after all that his brother has done, having raised his younger sibling much like Dean raised Sam and even admits that killing Lucifer would be hard for him. Despite his anger at Lucifer, when they meet again in Stull Cemetery, Michael admits to being genuinely glad to see his brother again in a softer moment before he and Lucifer prepare to engage in battle. The formerly close relationship between the two can be seen by Lucifer's furious reaction to Castiel's subsequent attack on Michael with holy fire.

However, despite this, at some point, Michael created the Lance of Michael, a weapon he intended to kill Lucifer slowly and painfully. After his escape from Hell, Michael only truly snaps when Castiel accuses Lucifer of being the smarter of the two archangels for knowing that God can't be trusted, using Lucifer against Michael. This results in Michael, who had previously remained relatively calm despite his anger and frustration, physically attacking his younger brother.

After being trapped in the Cage, Michael is stated to have gone insane by both Lucifer and God. After God's betrayal, Dean suspects both were lying and Michael is in fact demonstrated to retain his sanity. Following his escape from the Cage, Michael is left directionless and unsure of his place in the world. However, he remains as stubborn as ever, refusing to accept the truth about his father. When pushed by Adam, Michael admits that if he doubts God, he feels it would be a betrayal of all that he is. Michael's refusal to hear the truth goes so far as Michael behaving like a petulant child and relinquishing control to Adam just so that he didn't have to listen to it. After seeing Castiel's memories of his father and learning that his father was always around masquerading as a Prophet and he is not the only Michael as he had believed, Michael becomes disillusioned with his father and provides the means to trap God. However, he refuses to help further, not wanting to be directly involved in fighting his father.

Due to his time in the Cage alone with Adam Milligan, Michael has developed a unique relationship with his vessel for an angel. Whereas most angels and archangels in particular only view and operate their vessels as tools to manifest on Earth and don't appear to think of them as anything more than that, Michael has begun actively engaging with Adam, even on Earth. Having reached an agreement with each other in the Cage where all they had was each other, Michael is willing to share control with Adam. Michael states an intention to use Adam as a guide in the changing world where they are both adrift, having been gone for so long that neither Adam nor Michael truly knows what to do with themselves anymore. Michael appears to have become protective over his vessel, angry at Dean for abandoning Adam in the Cage while letting Lucifer go free and Michael and Adam even appear to have become friends. Notably, Adam is able to argue with Michael fearlessly who responds back with more sincerity than he showed with anyone else, even opening up to Adam about his fears that doubting God would mean Michael betraying everything he has been and believed in.

Like most angels, Michael has an extremely low view of demons. When encountering Lilith, whom he had in the past worked with to bring about the Apocalypse, Michael is incredulous at the idea that God would send "a speck of infernal bile" to retrieve him and smites Lilith when she gets on his nerves too much. 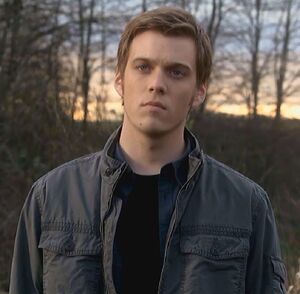 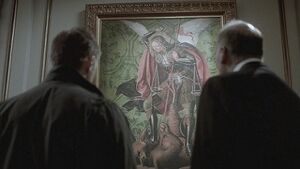 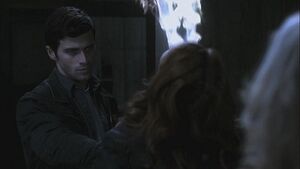 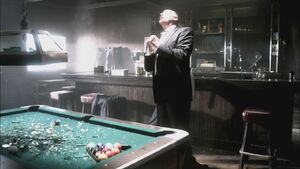 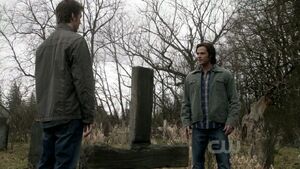 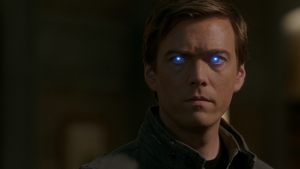 Michael after Lucifer taunts him. 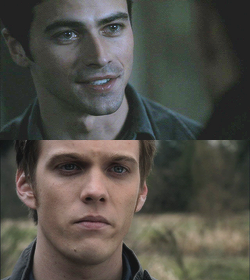