Making clones.
Killing anyone who threatens to expose his secrets.

Create human clones at Replacement Technologies with fatal diseases as insurance against betrayal.
Kill the genuine and clone Adam Gibson (all failed).

Michael Drucker is the main antagonist in the 2000 sci-fi/action film The 6th Day.

He was portrayed by Tony Goldwyn, who also played Carl Bruner in Ghost, The Gentleman Caller in Kiss The Girls, Dean Sanderson in The Mechanic, and Samuel Braithwhite in Lovecraft Country.

Drucker is the CEO of a cloning company named Replacement Technologies who hires a pilot named Adam Gibson and his partner Hank Morgan for a ski trip. However, Morgan poses as Gibson so that Gibson can clone his pet dog, who had died earlier that day, at a RePet shop. While Morgan is piloting Drucker on a mountaintop, they are both shot and killed by an anti-cloning fundamentalist named Tripp.

At Replacement Technologies, a clone of Drucker is created by his team without anyone else's knowledge. At the same time, a clone of Gibson is created since he was also believed to be dead, and takes his place amongst his family. When the real Gibson discovers this, Drucker sends his agents to kill him to erase any evidence of the illegal human cloning. Gibson avoids the agents and manages to kill a few of them, only for Drucker to have them cloned. Later, Gibson comes in contact with Tripp, who reveals to him that the new Drucker is a clone and that the incident was covered up. Gibson heads to Replacement Technologies and confronts the scientist behind Drucker's human-cloning technology, Dr. Griffin Weir. Weir informs him that Drucker would lose all of his power and assets if the incident was ever made public, since clones have no human rights, and he gives Gibson a memory disk for the new Drucker. Weir himself learns that Drucker has been implementing a fatal disease into all of his human clones as insurance against betrayal, and after his cloned wife dies of the disease, Weir confronts Drucker and quits his job. Knowing that he cannot afford to lose Weir, Drucker kills him with the intention of cloning both him and his wife (despite her having told Weir she did not want to be cloned again).

When Drucker realizes that Gibson has his memory disk, he kidnaps his family with the intention of luring Gibson to him. Gibson meets up with his clone and the pair decides to help each other take down Drucker and his cloning facility. Inside, the real Gibson destroys the security equipment and intentionally gets himself captured so that his clone can plant a bomb and rescue his family. Gibson is then taken to see Drucker, who tells him his plan to make human cloning legal in the near future. Gibson also discovers from Drucker that he is in fact the clone. Shocked by this news, Gibson fights off Drucker's agents and uses Drucker as a human shield, who is shot in the stomach with a ray gun by one of his men.

Mortally wounded, Drucker manages to clone himself but due to the malfunctioning equipment caused by Gibson, the new Drucker is hideously disfigured. After a brief confrontation with Gibson, the dying Drucker sends the new Drucker to kill him before succumbing to his wound. Gibson and his clone battle Drucker's remaining agents as the new Drucker pursues them to the roof, continuously shooting at them as they try to escape in a helicopter. Gibson uses a remote control to maneuver the helicopter behind Drucker in an attempt to kill him with its rotor blades, but Drucker manages to leap onto a glass roof to avoid them. However, his weight causes the glass to crack beneath his feet and sends Drucker falling to his death. 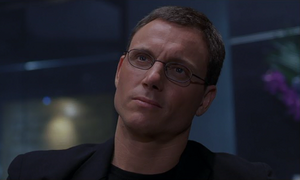 Drucker making a speech about the benefits of human cloning.

Drucker reveals to Adam Gibson that he is in fact a clone.

Drucker is mortally wounded after being shot in the stomach.

The new and disfigured clone of Drucker.

The new Drucker speaking with Gibson.

The new Drucker attempting to shoot Gibson and his clone.

The new Drucker falling to his death through a glass roof.
Add a photo to this gallery

Retrieved from "https://villains.fandom.com/wiki/Michael_Drucker?oldid=4154081"
Community content is available under CC-BY-SA unless otherwise noted.