Pedophilic Kidnapper
Michael Earlson is a major antagonist in the crime-drama TV series Criminal Minds. He is a pedophilic rapist and kidnapper who appears as the main antagonist of the Season Two episode "P911".

He wais portrayed by David Pevsner.

In 1999, Michael Earlson abducted a one-year-old named Dustin Powers from New Jersey. He took the boy to another city where he raised him to believe that he was his father. All the while, he molested him and placed pictures and videos depicting the sexual abuse online. When Dustin grew too old for him, Earlson decides to sell him in an online auction.

A special task force of the FBI who monitor online chatrooms for pedophiles led by Katherine Cole, discover the video feed and auction. Cole, recognizes the boy from another auction that didn't sell and went cold from years ago. Wanting to save Dustin this time, Cole enlists in the help of the Behavior Analysis Unit.

While posing as a child in the chatrooms, the FBI find a teenage boy named Kevin Rose going under the online handle "Hugz", who sells his body to pedophiles online for money. After tracking him down, they're able to convince him to cooperate with them and meet and set up one of his clients named "mehtevas". Kevin goes to meet mehtevas, to which he is revealed to be a school principal named Hayden Rawlings. Hayden is apprehended by the FBI, and try to get the password to his laptop so they can trick Dustin's captor. They eventually find the password after seeing the name mehtevas is "save them" spelled backwards. They message "Manchild" using Hayden's screen name.

Moments after receiving the message, Earlson sees a news broadcast showing Hayden's arrest and realizes that the message was really sent by the FBI in an attempt to trap him. While Earlson breaks the wall that he imprisoned Dustin in, and makes plans to escape, the FBI track him down after noticing the patch on Dustin's scout uniform in the video feed. As he stuffs Dustin in a suitcase and attempts to make his escape, the FBI show up at the house and he is apprehended, while Dustin is rescued.

The last we see of him is in the interrogation room, where he shows no remorse for his crimes and smiles at Agent Cole before he is lead away to be prosecuted. 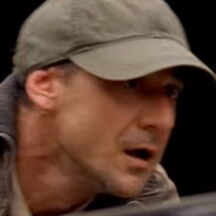