Stalking and kidnapping young blonde girls who resemble Melinda for their scalp.

Kidnap girls who resemble Melinda and remove their scalps for their hair (succeeded until he met Casey).

Michael Lewis Foster is the main antagonist of the 2013 thriller film The Call.

He is a serial killer who kidnapped blonde teenage girls who had a striking resemblance to his deceased sister Melinda, with whom he had an incestuous relationship. She died of cancer.

He was portrayed by Michael Eklund, who also played the Dollmaker in Arrow and James in Poker Night.

Michael Foster lives in Los Angeles, California. He had a sexual relationship with his sister Melinda, who eventually died of cancer, leaving Michael grieving and severely disturbed.

As an adult, he stalks attractive teenage girls who bear a resemblance to Melinda. He kidnaps them and surgically removes their hair. This hair was apparently used to reconstruct Melinda, though he struggles to find the right scent in each hair that matches his deceased sister's.

His known victims are Leah Templeton and Casey Welson.

Michael Foster first breaks into the home of Leah Templeton. She dials 9-1-1 for help. Unfortunately, the power lines are cross and Jordan Turner, the LAPD 9-1-1 dispatcher, redials the number which alerts Michael. Michael finds her, beats her unconscious and kills her by scalping her hair.

6 months later, Michael Foster strikes again when he finds Casey Welson at a mall with a friend. He follows her down to a parking garage where he kidnaps her and throws her into the trunk of his car. Casey dials 9-1-1 and a rookie dispatcher named Brooke answers but is unable to go through with it.  Jordan takes over and soon realizes that Michael Foster is the same killer from before. Casey finds paint cans and after punching out the tail light, she waves her hand and pours paint out onto the street signaling other drivers for help. When a man sees this, he tells Michael that paint is spilling from his car. The man tries to dial 9-1-1 but Michael catches him and beats him with a shovel. After this, he switches cars (to his victims blank Lincoln, a big change from the red Toyota Camry) to distract the police. But Michael leaves his fingerprints behind giving police a lead on who he is. When the man woke up, he tries to escape but Michael stabs the man to death causing Casey to cry in a panic thinking her life is over. After Michael stops for gas at a gas station, Casey attempts to break out of the car screaming for help. When the gas station manager tries to intervene, Michael pours gasoline all over the man and sets him on fire. Casey is then knocked out and locked back inside the truck. Jordan Turner then drives over to Michael Foster's house to see if she can find Casey. She finds several photos of him and Melinda in their sexual relationship and pieces his backstory together on how Melinda lost her hair and died of cancer. In the meantime, Michael has Casey tied to a wheelchair and straps her down onto a dentist chair. He then proceeds to take off her shirt and wash her hair. Jordan makes her way down into the basement where she discovers a dead body of another girl only to see Michael take a blond scalp and rub his face in it. This is the scalp of Leah Templeton. Michael goes into the room with Casey and prepares to scalp off her hair. At the same time, he apologizes as she begins to cry out in pain as he begins the procedure. He just begins to scalp her only for Jordan to intervene and knock him on the ground by hitting him in the face with a hair stylist's doll head. Jordan frees Casey but Michael tries to drown Jordan in the sink. Casey then takes scissors and slits Michael diagonally down the face. The two girls race out of the basement but Michael chases after them. Michael tries to attack Jordan but Casey stabs him in his lower back. Jordan and Casey proceed to kick him back into the basement and he falls into unconscious.

Casey decides to take revenge in her capture so Jordan and Casey tie Michael up to the dentist chair with duct tape and metal chains. Jordan reveals herself to him as the 9-1-1 operator. Casey then tells Michael that the police will believe that she escaped and that he just disappeared while leaning in his face and grinning at him. Casey and Jordan walk out of the room while Michael begs them not to leave him there. He struggles and tried to get out of the chair but it's no use. He then claims: "You're just an operator. You can't do this!" to which Jordan replies with: "It's already done." It is likely he died of thirst or starvation. 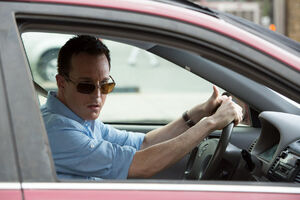 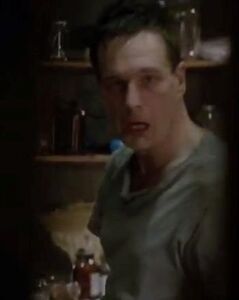 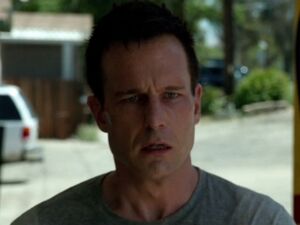 Retrieved from "https://villains.fandom.com/wiki/Michael_Foster?oldid=4119133"
Community content is available under CC-BY-SA unless otherwise noted.