Help Rowena Drake to take over the estate of Mrs. Llewelly-Smythe.

Kill everyone that is on his way.
Buy a Greek island for himself and start afresh.

Michael Garfield is the main antagonist of Hallowe'en Party, a 1969 detective novel written Agatha Christie, which is one of her later books of Hercule Poroit series, as well as its 2010 TV episode adaptation of Agatha Christie's Poirot.

He was introduced as a talented gardener of Mrs. Louise Llewellyn-Smythe, but had an affair with Mrs. Rowena Drake, and they planned a murder to take the rich old woman's legacy, ending up killing at least three people (six in the TV series).

Little is known about Micheal Garfield's early life. He was a man who was obsessed with pretty things. He once fall in love with Judith Butler and they have a daughter named Miranda. However, Micheal was too obsessed with beauty and Judith considered him as a man with madness and cruelty. She left him without telling him about her pregancy, making Miranda's last name "Butler" instead of "Garfield". She later came to Woodleigh Common and stayed there.

However, Mrs. Llewellyn-Smythe's new maid, Olga Seminoff, know the love affair and she reminded her hostess. Mrs. Llewellyn-Smythe changed her codicil in rage. She cut off her tie with the House of Drake and left her money, house and garden to Olga for she was an honest and genuine servant. One of Drake Family's solicitors, Leslie Ferrier, who once imprisoned for forgery but later released after helped by his later employer Mr. Fullerton, told Mrs. Drake about Mrs. Llewellyn-Smythe's change of mind. Ferrier faked a clumsy "codicil" and concealed the real one, framing Olga for faking her mistress' will.

Later, Mrs. Drake and Micheal Garfield poisoned Mrs. Llewellyn-Smythe and framing Olga as a gold digger and liar. Olga was furious and accused Mrs. Drake's evil deeds in her house, but was stabbed to death. Micheal buried Olga's corpse in Drake Family's garden. However, a ten-year-old Miranda Butler witnessed what Micheal did. Micheal guessed out that Miranda witness this and lied to her that the murder is a "sacrifice", and said "Sacrifices are necessary." Miranda thought this was a sacrifice and an accident, so she never told everyone except Joyce Reynolds, her best friend, without telling her the murderer is Micheal.

After Olga's death, Micheal finds Leslie Ferrier. He pretended to be grateful about what Ferrier had done and gave him the rewarding money. However, when Ferrier about to get away, Micheal stabbed him to death in order to shut him up, and he faked the murder as a killing for hatred. Now, he and Mrs. Drake thought they might be safe.

Two years later, in 1938, Micheal Garfield went to Athens, the capital of Greece. Meanwhile, in a Halloween party of Drake Family, Joyce Reynolds boasted about she witnessed a murder (which represented the murder of Olga Seminoff two years ago). Rowena Drake was horrified and she secretly drowned Joyce in an apple bobbing tub filled with water.

When Hercule Poroit on his way to Woodleigh Common in order to investigate Joyce's murder, he met Micheal Garfield. Poroit knew from Micheal's lips that Micheal is not the murderer of Joyce. After suggesting Poroit to visit Mrs. Goodbody, Micheal met Rowena Drake and was told of Joyce's words. Later, Micheal drowned Joyce's brother Leopold for he witnessed his sister's death and blackmailed Mrs. Drake.

However, Michael guessed that Joyce was lying, and he called Miranda and lured her in Drake Family's garden, but his attempting murder was stopped by Poirot, Ariadne Oliver, Judith Butler and Inspector Timothy Raglan. Inspector Raglan arrested Micheal and sent him in the house of Drake's family. After Poroit revealed that Judith was Micheal's real lover, Micheal admitted his crime and revealed all he wanted was money and the garden. He even later planned to buy a Greek island, build a garden and start afresh. He was took away by Inspector Raglan minutes later, with a crying Mrs. Drake.

In the original Hallowe'en Party novel by Agatha Christie, the description of Michael Garfield is much more shallow and ambiguous. In the original novel, he is shown to be the same egotist like his TV series version, even being compared to The Devil/Lucifer and Narcissus by Poirot himself. However, in the novels, it is not explained whether Michael was fully involved in the deaths of either Mr. Drake or Mrs. Llewellyn-Smythe, since neither of their deaths are explained beyond car accident and dying of sickness, respectively.

In the original version, Michael Garfield was actually the lover of Olga Seminoff, who was in a unrequited romance with him, around the same time he and Rowena Drake had a love affair. However, while being aware of Olga's feeling for him, Michael merely saw Olga as his scapegoat and murdered her when she was accused of forgery. He and Mrs. Drake hid Olga's body in the garden, specifically inside a dried well, but was witnessed by Miranda. Years later, Miranda overheard their conversation about buying a Greek island and recognized them as the murderers.

Unlike the TV series, in the novels, it was implied that Michael truly had fathering feeling towards Miranda, to the point of drawing a sketch of her in order to keep herself in mind. However, this could be interpreted into another perverted action since he always tried to kill her for witnessing the death of Olga.

By the end of novel, when his plans was stopped by Poirot, Michael committed suicide by drinking the poison he reserved for himself and Miranda, rather than facing justice and confessing his motive like that in the TV adaptation. 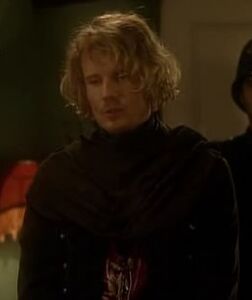 Garfield upon his arrest. 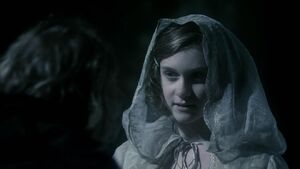 Garfield goading Miranda to confess and commit suicide.
Add a photo to this gallery

Retrieved from "https://villains.fandom.com/wiki/Michael_Garfield?oldid=3876797"
Community content is available under CC-BY-SA unless otherwise noted.