Michael Jefferson, also known by his real name Michael Jackson and his alternative alias "Martin Jefferson", is a recurring realistic antagonist of the adult animated sitcom South Park, who thinks that he is not evil when he really is.

He is voiced by the series' co-creator Trey Parker who also voices other characters in the series, including Eric Cartman and PC Principal.

Michael has white skin and black hair. He wears a white t-shirt and red trousers. He also wears a white glove on his left hand. In the episode "The Jeffersons", he sports a fake mustache (so no one can realize that he is Michael Jackson). Towards the end of the episode, however, Jackson's appearance begins to become mutilated, as his face begins to fall apart and melt, causing him to becoming skeletal and zombie-like. He goes on to wear the red jumpsuit from his music video "Thriller." At the end of "Dead Celebrities", he is shown wearing the formal outfit he wore during the 1984 Grammy Awards.

Michael first appears in the episode with his son Blanket who is afraid of his own father and has the South Park kids rescue him.

In "Dead Celebrities", Michael refuses to accept his death, causing himself and other celebrities who died during Season 13 to be trapped in the spiritual realm of Purgatory. Michael Jackson then possessed Ike Broflovski, so the boys had to help him live his dream of being a little white girl in order to banish his ghost from Ike's body. After Michael Jackson won a beauty pageant, in Ike's body, he accepted his death

He and the other celebrities were able to leave purgatory. Michael Jackson presumably now resides in Hell. He, however, was shown in the crowd of angry celebrities in "200". 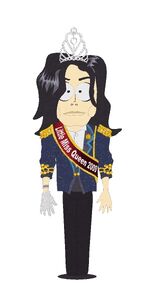 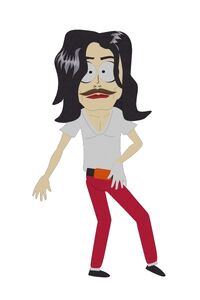 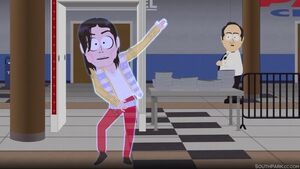 Michael Jackson's hologram escapes.
Add a photo to this gallery

Retrieved from "https://villains.fandom.com/wiki/Michael_Jefferson?oldid=3449498"
Community content is available under CC-BY-SA unless otherwise noted.