Leader of the Cooperative

Bring forth the world's destruction (failed).

He is considered to be the bringer of the End of Days, as well as the biological grandson and the adopted son of Constance Langdon. He is also the birth child of a ghost, Tate Langdon, and his human rape victim, Vivien Harmon. At the start of the show, he is a seemingly innocent child, but in fact, he is the Anti-Christ, as prophesied by Billie Dean Howard, and his true father is revealed to be none other than Satan himself, having used Tate as an unwilling conduit/vessel to conceive Michael with Vivien.

He was portrayed by Ocean Maturo as an infant, and Asher Gian Starita as a child in Murder House. He is portrayed by Cody Fern - who would play Valiant Thor in a later season, Double Feature - as an adult in Apocalypse.

Michael's mother, Vivian Harmon, became pregnant with him after being raped by Tate Langdon, who at the time was possessed by the Devil; he is therefore the Antichrist, destined to bring about the end of the world. Even before he has born, there was something clearly wrong with him, causing a nurse attending his ultrasound fainting of fright and becoming religious as well as causing his mother to have a nightmarish dream and want to devour raw organs. Thinking the nurse to be mad due to her terror, he is soon born along with a stillborn twin. Constance Langdon, Tate's mother, and her servant Moira O'Hara admire the baby, Hayden Sinclair attempts to take the child for himself, but Constance kills her and takes the baby to raise herself. However, Michael displays psychopathic tendencies from a young age, killing his nanny at the age of three.

It was revealed in the later on of the eighth season, Michael started to kill small animals as a baby, before killing his nanny at the age of three. One day, Constance entered Michael's bedroom to discover he had aged 10 years overnight and now had the appearance of a teenager. When Michael tried to strangle Constance in her sleep, she consulted the help of a priest, only for him to be murdered by Michael. With her dreams of motherhood shattered, Constance returned to the Murder House and committed suicide by overdose.

After Michael discovered that Constance had killed herself to be free from him, he attended therapy sessions with Ben Harmon. A father-son relationship developed between the two. However, Michael slowly grew more and more unhinged and dangerous after meeting and being rejected by his "biological" father, Tate. Soon, Ben witnessed Michael mutilating the ghost of Elizabeth Short/Black Dahlia, as well as not only murdering two new residents, but permanently expelling their spirits from existence. Realizing Michael's capacity for evil, Ben was so horrified that he ended their sessions at once. It also caused his rift with Vivien, as Vivien could not stand Ben's connection with Michael.

One night, a group of Satanists arrived at the house, consisting of Miriam Mead and another satanist cardinal and headed by Church of Satan founder, Anton LaVey, who had faked his death in order to meet Michael. The Satanists kidnapped a young woman from a bus stop and brought her to the house where they performed a Black Mass, with LaVey removing the girl's heart for Michael to consume. A demonic shadow appeared and Michael announced that he is one with his "Father." After a rain of blood and hail descended, Vivien attempted to murder Michael. Before he could destroy her, she was saved by Tate, allowing Michael to leave the house.

It was later revealed that Tate was taken over by the Murder House's own demonic nature when he raped Vivien along with all of his other crimes, making it clear that Michael is born from the very darkness that this house embodied, the Devil himself. Upon this reveal, Tate and Violet reconciled over the matter.

After leaving the Murder House, Michael bonded with Mead, a fanatical Satanist who became his surrogate mother. One day, in a supermarket, Mead argued with a butcher who refused to sell her a goat's head, with the former claiming that the butcher was disrespecting her religion. Michael firmly defended Mead and confronted the butcher, but the butcher rebuked him and cursed Mead. Enraged, Michael unleashed his power and impaled the butcher with five kitchen knives, killing him.

Horrified at what he had done, Michael was taken into custody and sent for interrogations, pleading that he did not intentionally try to murder the butcher. However, as the interrogator continued to push him, Michael unleashed his dark force once more, possessing the officer, pushing him towards the ceiling and bending his limbs, before blowing his head up.

The news soon spread towards the Hawthorne School for Exceptional Young Men, where the warlocks Behold Chablis, Baldwin Pennypacker, John Henry Moore and Ariel Augustus, the Grand Chancellor of warlocks, watched a videotape of Michael killing his interrogator. Ariel believed that Langdon is a warlock, while Moore believed it was a case of demonic possession. They consider a prophecy about an Alpha Warlock who could supplant the Supreme Witch, Cordelia Goode. With the help of Mead, Ariel visited Langdon in jail, explaining that he was defending his caretaker from a callous butcher. Ariel released Michael from his cell and they left for the school.

Upon arrival, Ariel explains that it is underground because the original house above was destroyed by angry neighbors unhappy with the school's purpose revealed in the wake of Cordelia's "outing" the magical community three years prior. Ariel introduced him to the other students, telling them that they should make him feel as if this is his new, true home.

One month later, the instructors are evaluating Michael's power level. They hope he will rate a "level four", putting him on par with the female Supreme Witch. He exceeds the first test by not only locating a book hidden within a mirror, but retrieving it as well. Most are impressed, but Moore was troubled that he did not follow instructions. He similarly aced the examination by effortlessly teleporting throughout the room. Michael then passed the third test by producing falling snow inside the room, which earns him further praise, but his power soon lost control, nearly killing the examination board by causing a snowstorm and freezing the room.

At Miss Robichaux's Academy in New Orleans, a recently revived Myrtle Snow visited Cordelia and announced that the Hawthorne School for Exceptional Young Men had called an emergency council session. Cordelia, Zoe and Myrtle travel to the Hawthorne School.

At the meeting, Ariel explained that they wish Michael to challenge Cordelia for Supremacy. While the women scoff at the idea of a male Supreme, Ariel insists that Cordelia administer the Seven Wonders to test Langdon. Cordelia refuses, saying that it would surely condemn the boy to death, as it did to witch Misty Day. Chablis chastised her for abandoning coven member Queenie after her disappearance in Los Angeles, but Cordelia responds that she found Queenie's ghost in the Hotel Cortez, playing cards with the ghost of the hotel's founder James Patrick March.

Unable to extract Queenie past the doors of the hotel, Cordelia realized that the Hotel Cortez was a demonic portal that she was unable to overcome, saying it was her greatest failure since her ascension as the Supreme. Ariel called her a bigot for ignoring the possibility of an Alpha.

Meanwhile, Michael has a scrying vision of the Hotel Cortez, which he drew a perfectly accurate sketch of it on a paper. He traveled to Los Angeles and visited Queenie, who had won more than 50,000 turns of cards with March. March was somewhat disturbed as soon as he saw Michael, and he allowed Queenie to go free. Soon, Michael successfully emerged from the hotel with Queenie. Michael later accompanied Queenie into the Underworld, saving Madison Montgomery from her eternal endurance of labor and humiliation.

After saving Queenie and Madison from their respective Hell, Michael led the duo to the Hawthorne School, as they met Cordelia, Zoe and Myrtle who were leaving. Shocked at the revived Madison and Queenie, Cordelia fainted.

Now an adult, Michael Langdon, leader of one of the post-apocalyptic outposts, arrives at the outpost run by Wilhelmina Venable. Here, he states that he will decide who is worthy to come with him to his more formidable outpost, and those that aren't shall, as he states, end up like his horses, which were shot and presumably eaten by him off-screen.

The chaotic teenager makes his way outside only to be run over repeatedly by Mallory. Michael begs Constance to take him into the Murder House so that he can be with her, but Constance tells him to go to hell where he belongs.

After Michael's death and the renewal the of timeline, the Apocalypse and nuclear weapon attack never happened, and many characters resumed to their original life. After killing Michael and saving Misty & Queenie from their tragic fate, Mallory, now as the new Supreme Witch, was hailed as a hero due to her efforts in stopping the Anti-Christ, but the battle between good and evil shall go on. Mallory later resolved to bring back Maddison, who remained trapped in Hell due to Michael's death in the past.

In 2020, the revived Emily and Timothy (with their death prevented thanks to Mallory) fell in love with each other and married. They had a child after a love affair, naming him Devan. However, by the end of the series, it was shown that three years after his birth, Devon killed his nanny when he was a child, in a manner just like what Michael did when he showed his demonic nature by the end of Murder House. The Satanists soon arrived to Timothy and Emily's house, hoping to hail their Anti-Christ once more. 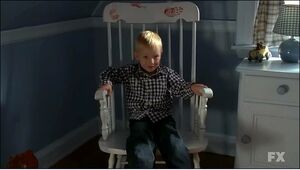 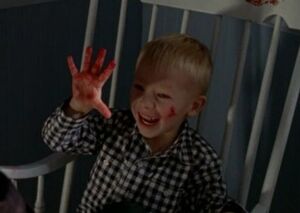 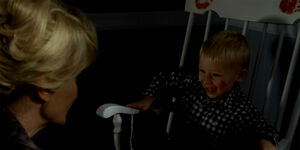 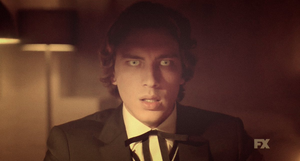 Michael in a trailer of Apocalypse. 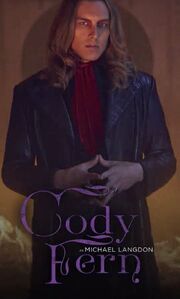 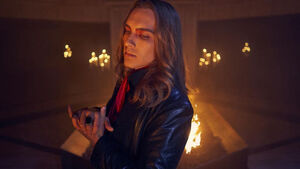