Villains Wiki
Register
Don't have an account?
Sign In
Advertisement
in: Spoilers, Articles under construction, Outdated Articles,
and 58 more
English

Find a cure for his rare blood disease (succeeded, backfired).

Kill his brother after he gets out of control (succeeded).
Cure his bloodlust (ongoing).

Dr. Michael Morbius is a major character in Sony's Spider-Man Universe, serving as the titular main protagonist of the 2022 film of the same name.

He was a Nobel Prize-winning scientist suffering from a rare blood disease who attempts to cure himself with a form of transgenic vampirism which gives him superhuman abilities, but also an unstoppable bloodlust.

He was portrayed by Jared Leto, who also played Angel Face in Fight Club, Harry Goldfarb in Requiem for a Dream, Junior in Panic Room, the Joker in the DC Extended Universe and Niander Wallace in Blade Runner 2049.

At a hospital in Greece, 10-year-old Michael Morbius welcomes his surrogate brother Lucien, whom he renames Milo, they bond over their shared blood illness and desire to be "normal". Their adoptive father and hospital director Nicholas arranges for Michael to attend medical school in New York while he focuses on caring for Milo.

Twenty-five years later, Michael publicly declines a Nobel Prize for his work with synthetic blood. Michael's colleague Martine Bancroft discovers he has secretly captured dozens of vampire bats from Costa Rica in hopes of splicing their genes with his own to cure his condition.

After informing Nicholas and Milo of his planned experiment, Michael receives funding to outfit a private mercenary vessel in international waters with his equipment. While the cure works, it transforms Michael into a vampire. Michael kills and drains the crew of their blood after they attack him out of fear. Once his bloodlust subsides and he regains his senses, a horrified Michael erases all CCTV footage of his experiment before contacting the authorities and jumping overboard.

Michael returns to New York and discovers he has superhuman abilities, including echolocation. He subsists on his synthetic blood until it gradually ceases to satisfy his needs. Milo learns that Michael is cured, but becomes furious when Michael refuses to cure him as well. While checking on a hospitalized Bancroft, Michael finds a dead nurse, drained of her blood. Believing he was responsible, he attempts to escape before being cornered and arrested.

In prison, Michael is visited by Milo, who offers to use his wealth to free him. Upon realizing Milo took his cure and killed the nurse, Michael escapes to confront him. Michael meets Bancroft to explain what Milo has done before acquiring a new lab and developing an anticoagulant to stop and kill Milo. He also plans to use it on himself since he will become unable to resist his bloodlust.

Stroud and Rodriguez find footage of one of Milo's attacks and release it to the media. Nicholas recognizes Milo and pleads with him to stop. Angered by Nicholas' perceived preference for Michael, Milo wounds and forces him to call Michael. Michael watches Nicholas die while Milo attacks Bancroft. Michael returns to Bancroft, but she dies in his arms and he drinks her blood. Michael confronts and fights Milo before summoning a swarm of vampire bats to restrain him and inject the anticoagulant. Milo dies peacefully and Michael flies off with the bats, embracing his identity as a vampire.

Sometime later, Michael encounters Adrian Toomes, who was suddenly transported from the MCU to Michael's universe due to a side-effect of Doctor Strange's spell to remove the knowledge of Peter Parker's secret identity as Spider-Man in order to stop the Multiverse from fracturing, despite Adrian not being a multiversal outsider. Adrian reveals that he has been studying up on Morbius' recent actions as a vampire and knowing that his appearance in his universe has something to do with Spider-Man, he offers to start a team with Michael to "do some good". 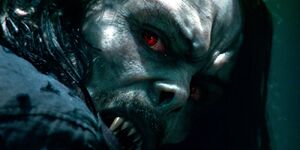 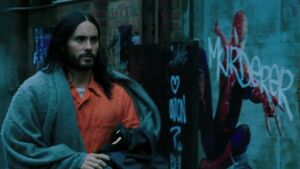 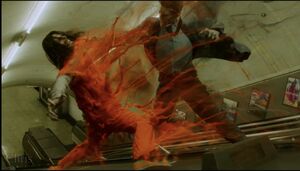 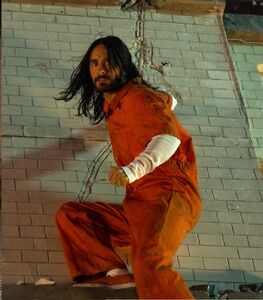 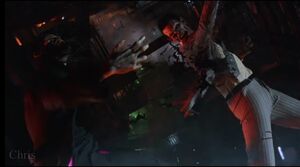