Villains Wiki
Register
Don't have an account?
Sign In
Advertisement
in: Teenagers, Mutated, In Love,
and 41 more

Get revenge on both Ben and Kevin (both failed)

Michael Morningstar, also known as Darkstar, is a major antagonist in the Ben 10 franchise.

Introduced in the episode "All That Glitters" as one of the alien-hybrid plumber kids that Ben and his friends were looking for throughout Ben 10: Alien Force, Michael quickly revealed himself to be a formidable foe rather than a strong ally. He has the ability to drain the life force from living beings via physical contact. He gained a grudge against Ben and his team after they accidentally caused him to turn into an awful zombie-like being who has to wear a helmet to hide his face. His plans usually involve gaining back his original face and feeding himself, though he seems to still be interested in feeding from Gwen's vast stores of Anodite energy.

He was voiced by Wil Wheaton, who also played Jonathan Rook in Stretch Armstrong and the Flex Fighters.

Michael is an extremely vain and egotistical individual who seems to view all females he comes into contact with as "trophies" (as he called Gwen this when battling her and the others in Couples Retreat). He is also viewed as power-hungry and egomaniacal. However, at times he is shown to have some level of morals or restraints, such as when he started absorbing the DNAliens but stopped once Ben pointed out that he was killing them, although he was irritated at him for stopping him.

Michael is initially depicted as a well-mannered individual who appears eager to help Ben and company. He comes from a rich family, as he states that his family has multiple mansions. How his family acquired such wealth isn't explained but it is known his is the only family which has such wealth and are armed with a menagerie of Plumber technology. The technology in question is monitoring equipment that uplinks to a variety of networks, which funnels information to him. Part of the monitoring equipment features a communication network between the Plumber badges. As they travel with him, he shows a very uncaring attitude to others around him. This is evident by his slamming of the door in Kevin's face as well as his remarks to Gwen while they are alone. While Ben and Gwen quickly trusted him, Kevin Levin knew since the beginning about Morningstar's true motivation (partially because of his jealousy, as Michael and Gwen tended to flirt with each other). After a fight with zombified schoolgirls from unknown origin, Kevin guessed that Michael was the one responsible for these zombifications. His guess later proved to be right when Morningstar drained Gwen's energy, becoming nearly unstoppable and easily defeating both Ben and Kevin. However, Gwen proved to have enough will to resist his control, and drained her energy back from him, as well as part of his own, leaving him weakened. His other zombie victims then turned against him, and took back what remained of his energy, leaving him almost desiccated and powerless. His Plumber badge was destroyed by Kevin who states that he doesn't deserve it.

He later reappears as Darkstar in Darkstar Rising, his powers having gradually returned much stronger and more powerful than before. In order to get revenge, he tries to get Ben, Gwen, and Kevin arrested by Magister Prior Gilhil for impersonating Plumbers and by making a deal with a Highbreed lord he defeated. When the Highbreed did his part of the deal, Darkstar tried to absorb Ben, Gwen, Kevin, the Highbreed, and Gilhil's life force energy, but he was unable to absorb Gwen's because she escaped. He later captured the four and was about to absorb all of their life force energy when Gwen came in with the DNAliens in which he was unable to absorb all of them because of fatigue. He was defeated by Ben using a combination of his aliens. Afterwards, he was arrested by Magister Gilhil and sent to the Null Void.

In the two-part second season finale War of the Worlds, Darkstar is eventually released from the Null Void by Cooper Daniels so he can help them stop the Highbreed invasion. During the battle, he tried to absorb the life force energy of several DNAliens, transforming his face back to its original youthful appearance, but Ben managed to talk him out of it because Michael realized that he was killing real people under alien control. After the fight was over, Darkstar managed to evade them.

Darkstar appeared again in the third season in the episode Trade-Off, where he tricks Kevin into finding him so that he could convince Kevin to join him to find the Dominus Librium (a device that was decidedly alien origin and could restore the two of them to original human forms) to which they eventually retrieved and used to absorb their powers and return them to normal. Then he sucker punched Kevin in the face. Darkstar kept the Librium so he could still use his powers. When Gwen discovered the truth about Kevin, she confronted Darkstar and he started to drain her power as well as Swampfire's. Darkstar's full power was eventually perished by Kevin when he broke the Librium and got his regular powers and ugly appearance again. Darkstar then swore that he would make them all pay someday before running away.

When Darkstar appears in the two-part first season finale Absolute Power, it is revealed that he is now in a weakened state and is forced to feed off the energy of stray animals just to survive and tries not to cause too much attention to himself. He was later found and recruited by Gwen to stop Ultimate Kevin. As payment, she changes his face back to normal using a powerful transformation spell and promises him mana, enough to keep him fully restored for a year. Michael then agrees to help her to stop Kevin, much to Ben's chagrin. Michael reveals that he kept a fragment of the Dominus Librium after it had exploded in Trade-Off, though it's ineffective. However, a strong energy surge would make it usable again. The group goes to Los Soledad and meet Cooper Daniels, who also agrees to the plot. Both Michael and Cooper create a device while Ben and Gwen stall Kevin. When Kevin becomes normal, Michael takes advantage of this moment and absorbs the vast powers and abilities of the Dominus Librium, becoming the power-hungry Morningstar again. He then shreds off his clothes and becomes pure energy. However, Ben anticipated this plot and presses a button which causes Morningstar to become normal again. Ben reveals that he told Cooper to create a mechanism to revert the process of the absorption. He reverted to normal in his boxers. Afterwards, Kevin punches Darkstar on the eye in retaliation prior from Trade-Off.

Darkstar reappeared in Couples Retreat, having reverted back to his ugly form. He broke into Kevin's garage to steal one of Gwen's spellbooks. He used a spell in it to summon the Door to Anywhere, but was badly injured while fighting Ben, Gwen, and Kevin in the process. Escaping his pursuers, Darkstar collapses at the foot of the open door, and Charmcaster appears, taking him to her castle in Ledgerdomain. Once in Ledgerdomain, Darkstar reverted back to his handsome form, now having access to an unlimited supply of Mana. Charmcaster and Darkstar are later engaged in a romantic relationship, but Darkstar, of course, was only using Charmcaster for her power and the power of Ledgerdomain. After telling him her real name, Hope, Charmcaster planted a rune on Darkstar's hand that acts like the key to Ledgerdomain, so he can come and go as he pleases. However, Darkstar soon finds that the power of Ledgerdomain leaves him when he leaves the realm, so he returns there, but is pursued by Ben, Gwen, and Kevin. At Charmcaster's castle, Darkstar fights Ben and Kevin, ranting about how he'll take over Earth and Ledgerdomain, and keep the "lovely Gwen" as a trophy.

Charmcaster confronts him about this, but Darkstar denies having meant it seriously and offers Charmcaster to join him in being evil. However, Charmcaster asks him if he remembers her real name. Darkstar, unable to completely remember, replies "Heather." Charmcaster becomes enraged, destroying her castle in a burst of magical power and also kicking out Ben's Team. In addition, she expelled Darkstar from Ledgerdomain, stripping him of his powers and returning to his ugly appearance. Charmcaster closes the Door to Anywhere in Darkstar's face, despite his pleas for her to take him back (calling her wrong names in the process). Ben, Gwen, and Kevin then approach Darkstar, ready to beat him up and apprehend him once more.

He returns in Special Delivery where he is one of many characters who cameos in the stands awaiting the items being auctioned off by Psyphon in Undertown.

He returns in Mystery, Incorporeal where he disguises himself as a nerd named Dante and captures Gwen using one of the Charms of Bezel at her college. He attempts to use her as a sacrifice to open a portal to Ledgerdomain to gain a unlimited supply of mana and is almost successful, until Ben transforms into Ghostfreak to possess him and make him reverse the spell at the last minute. After being taken into police custody, Charmcaster appears before him in order to take revenge.

In Charmed, I'm Sure, it was revealed that Charmcaster turned him into a stone totem along with Adwaita and is kept in her bag. He whispers a plan into her ear that she likes in order to keep her from smashing him. Their conversation made Ben and Rook call her crazy and weird.

In Charm School, through Darkstar made no onscreen appearance, Charmcaster told him in her bag that he was a horrible boyfriend.

In Third Time's a Charm, Darkstar, along with Adwaita, Hex, and Gwen, is freed from Charmcaster's bag. He attempts to flee, but was stopped by Rook. It is unknown if he was sent back to the Null Void.

He first appears in Bright Lights, Black Hearts, where he is a movie star. He steals energy from his fans and tries to do the same to Gwen. He is defeated when Ben turns the crowd against him. He later briefly gets Charmcaster as a girlfriend, before she turns on him.

Michael's absorption powers cannot absorb life energy/mana from Ectonurites as they have none inside them, which make it unaffect to them. 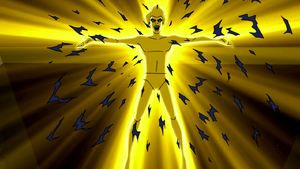 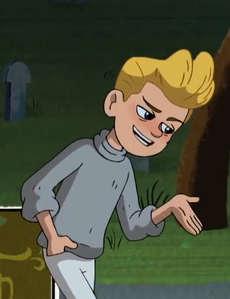 Michael Morningstar in the reboot