Making masks (as a child and in Smith's Grove)

Michael Audrey Myers is the main antagonist of the 2007 reboot of Halloween and the 2009 version of Halloween II. He is based off his original incarnation with the same name.

As in the original films, he hides his face behind a mask. The main difference outside of having a significantly more tragic backstory is that he is considerably less evil than his mainstream incarnation. This version of Michael Myers is also physically much larger than the original, standing nearly seven feet tall, with this providing a non-supernatural explanation for his great strength and durability.

He was portrayed by former wrestler Tyler Mane (who also played Sabretooth in X-Men) as an adult, and Daeg Faerch as a child.

As a child, Michael lives with his mother Deborah, older sister Judith, infant sister Angel, and Deborah's abusive boyfriend Ronnie White. He is frequently abused and mocked by Judith and Ronnie, and is targeted by bullies at school. The only people Michael is close to are Deborah and Angel. At age 10, he begins torturing and killing animals. He finally snaps on Halloween, and murders school bully Wesley Rhoades, Ronnie, Judith's boyfriend Steve Haley, and finally Judith herself. Michael is put in a mental hospital, where psychologist Samuel J. Loomis tries to help him, to no avail. Michael is visted once a week by Deborah. After Michael kills a nurse (after she unintentionally offends him after looking at a picture of him and Angel and saying that he and Angel could not possibly be related), Deborah commits suicide, and Loomis finally realizes that Michael is an untreatable psychopath. Michael, meanwhile, stops speaking, and refuses to take off his mask.

Fifteen years later, on the night before Halloween, Michael escapes and decides to come home to find Angel, so they can be a family again. Angel had been adopted by the Strode family and renamed Laurie, and has no idea that she and Michael are related. He tracks her down, murdering everybody who gets in his way, including her adoptive parents. Upon hearing that Michael has escaped, Loomis follows him to his hometown of Haddonfield, Illinois.

Michael finally finds Laurie and abducts her. She later wakes up inside her old home - the Myers residence to Michael taking off his mask and showing her a picture of them as children with their mother, in an attempt to tell her that they are brother and sister. She doesn't understand, however, and stabs him. Loomis arrives and, after pleading with Michael to stop, shoots him until he falls to the ground. Michael survives, subdues Loomis and pursues Laurie to the roof of the Myers home, where she tackles him to the ground below and shoots him in the face.

Two years later, Laurie finds out why Michael attacked her: she is in fact Michael's sister Angel, and he wants to kill her and himself so they can be together again.

On Halloween, Michael attacks her again, and he hides out in a shed, surrounded by police. Loomis tries to reason with Michael, but Michael overpowers and kills him. The police shoot Michael in the face, and Laurie tells him that she loves him to put him off guard. When Michael hesitates, Laurie stabs him in the face. She comes out of the shed wearing Michael's mask.

In the Director's cut of the movie, Michael throws Loomis through the barn wall, reveals his face and says "Die!" while stabbing Loomis. The police then shoot Michael dead. Laurie then picks up Michael's knife and stabs Loomis' corpse. She is institutionalized in a psychiatric ward, having taken up her brother's mantle.

Unlike his mainstream counterpart, this version of Michael Myers is not pure evil nor immortal and is instead mentally insane, very strong and has a high endurance of pain due to his immense built and size, this version of him also doesn't attack random civilians, only those who stands in his way or bother him. He also possesses some form of humanity and loves his sister Laurie unlike his mainstream counterpart. As a child, Michael Myers was a typical sweet and baby-faced boy who loved his mother Deborah dearly and his baby sister Laurie. However, due to his horrible upbringing and constant ridicule from his mother's boyfriend Ronnie, his older sister Judith and his peers he developed murderous tendencies which began when he started mutilating and killing small animals such as his pet rat Thomas. He was also unforgiving and wrathful as he would mercilessly beat his high-school bully Wesley Rhoades to death with a tree branch when the latter apologized and pleaded for his life. At the end of the day, after both Judith and Ronnie refused to take him out for trick-or-treating on Halloween night while Deborah finishes up her night shift as a stripper, Michael snapped and brutally murdered Ronnie, Judith's boyfriend and Judith herself and found satisfaction with his actions, it was that night, Michael's inevitable descent into evil began.

Fast forward fifteen years however, Michael, now a hulking grown man is completely detached from society nor any human connection while spending time in Smith's Grove. He basically is dead inside and lacks any form of remorse, empathy or compassion up to an extent. However, he saved a female patient from getting raped by two guards (even though he took his time and one guard succeeded first) and also still loves his now-grown up sister Laurie and attempts to find her and let her know of her true family and heritage (in his own twisted way) but he is regardless a depraved and psychopathic individual who enjoys torturing his victims and killing them brutally as well as being so wrathful up to the point that he killed a janitor in Smith's Grove who was kind to him ever since he was a child and he also loses his temper and attempted hunt down and kill Laurie out of pure rage due to her stabbing him and running away from him. 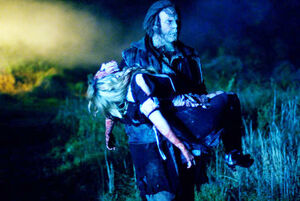 Michael carrying the knocked out Laurie.