Michelle Jenkins is a minor antagonist in Futurama. She was Philip J. Fry's last girlfriend before he was frozen. She broke up with Fry when she met Charles Constantine. Michelle was later married to Charles before she fell on hard times. She froze herself, with the intention to wake in 2266, to give herself a fresh start, but instead woke in 3001 and briefly hooked up with Fry again.

Michelle's dislike of the 31st century led her to persuade Fry to freeze himself with her another 1000 years, which led them to a wasteland (in reality they were still in 3001 and had simply moved to Los Angeles). The pair quickly grew impatient with each other, making their relationship sour again, and she hooked up with Pauly Shore. Fry once described her as "demanding and possessive".

Michelle is first seen in a taxi with a new boyfriend, Charles, and tells Fry that their relationship is not working out, and she has left his belongings out on her lawn.

Later on, after Fry escapes from Leela's attempts to install his career chip, Fry remembers a happy time when he and Michelle were ice skating at Rockefeller Center and it makes him realize that everyone he ever knew is gone.

Fry and Bender enjoy their new job by tricking people, the next person they try to trick turns out to by Fry’s ex-girlfriend Michelle and they reunite. Michelle tells her story of how she got married, divorced and then froze herself. She and Fry rekindle their relationship. Michelle has trouble fitting in with giant roaches, art tattooed on fat people and other weird things in the 31st century. Things get worse when she meets the rest of the Planet Express crew. She tries to make friends with people like Amy, only to discover she's Martian. Michelle tells Fry that she feels as she doesn't belong, and that the only way to be happy once more is to freeze themselves again. Fry reluctantly agrees, and they freeze themselves until the year 4000. They awake in a barren landscape.

Fry and Michelle argue and Michelle demands that Fry builds a shelter and the best he can do is a hole which doesn’t satisfy Michelle. The next morning they are woken up by some kids with guns. They are taken to the place they live ruled by a boy named Butch. Michelle wants power and makes Fry challenge Butch's leadership. The challenge is to skateboard. He cheats and wins this challenge, but then Butch's mom arrives and tells all the kids to come to Hebrew class. Fry is even more confused. Fry and Michelle argue again and Fry leaves Michelle.

That he was in Pauly Shore’s tube and the people responsible for delivering it to his movie screening chucked it in a ditch when they found out it wasn’t him. Michelle is now dating Pauly Shore.

During Leela's coma dream sequence, Michelle was briefly seen at Fry's funeral, along with his other flames.

Afterward, Bender walked in on them mid-coitus while searching for Fry. This was when Michelle found out that his name was Constantine. She remarked that it was "a dumb name".

When Fry first enters his dream, he is in his old apartment. When he calls Michelle "old", Michelle tells him not to call her old and says that a lot of young people have dentures. Fry then tells Michelle that she's just a dream.

Michelle is later seen in a taxi with a new boyfriend, Charles, and tells Fry that their relationship is not working out, and she has left his belongings out on her lawn.

Futurama: World of the Tomorrow

Michelle is an unlockable character available during the Love is in the Air Event. Michelle is available in the store for 400 Michelle Orb and can be fully unlocked for 400 Pizza. 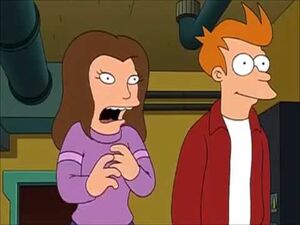 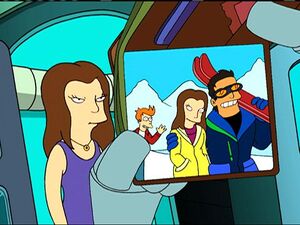 Michelle photo that showed his little interest in his relationship with Fry. 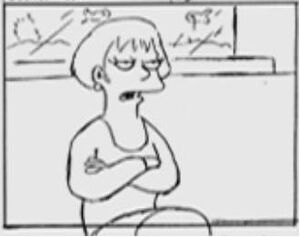 Older concept of Michelle named "Janet" from Futurama storyboard.
Add a photo to this gallery

Retrieved from "https://villains.fandom.com/wiki/Michelle_(Futurama)?oldid=4167020"
Community content is available under CC-BY-SA unless otherwise noted.