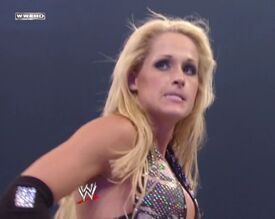 Michelle McCool is a former WWE Diva who is best known for being the first ever WWE Divas Champion. She would become the first Diva to hold the Divas Championship and the WWE Women's Championship at least once when she won the latter in 2009. During her seven-year WWE career, Michelle has portrayed a villainess on two separate occasions.

After portraying a babyface in 2004 and 2005, Michelle began her first run as a villainess on June 2, 2006. She returned to WWE TV dressed as a "hot teacher" and began feuding with Divas such as Ashley Massaro and Jillian Hall. Michelle later served as the heel manager for KC James and Idol Stevens, who were dubbed the "Teacher's Pets," and they feuded with Paul London, Brian Kendrick, and Ashley for several weeks. Michelle's role ended due to suffering several injuries, and she would return to being a babyface when she resurfaced on SmackDown in March 2007.

Michelle would become the first ever Divas Champion when she defeated Natalya Neidhart at The Great American Bash in 2008. In the waning months of the year, Michelle developed a heel persona; beginning with a Divas Championship match against Maria Kanellis on November 14 edition of SmackDown, which Michelle won. After Survivor Series, Michelle and Maria faced each other on the December 5 edition of SmackDown in a non-title rematch. Michelle portrayed the villainess and attempted to destroy Maria, but she ended up losing the match in the process. Michelle snarled evilly at Maria after the match, and she later attacked Maria backstage; claming that she got what she deserved.

On the final SmackDown of 2008, Michelle lost the Divas Championship to Maryse in a match officiated by Maria, who Michelle later attacked to cement herself as a villainess, all the while claiming that Maria cost her the title. The following week, Michelle snapped at Eve Torres during a backstage interview, but later apologized to her in the ring. Once Eve's back was turned, the evil Michelle attacked her from behind and continued her assault outside the ring. Michelle's second run as a villainess led to her capturing the Women's Championship at The Bash in 2009; doing so by defeating Melina.

Michelle aligned with Alicia Fox in the early months of the year, but it was in the fall of 2009 that she formed her famous alliance with Layla El. Collectively known as "LayCool," the duo tormented and bullied Mickie James for several months, and even feuded with Beth Phoenix entering 2010. Michelle would add another reign as Women's Champion during that year and would become the first ever Unified DIvas Champion when she defeated Melina in a Lumberjill Match at Night of Champions. After losing a six-person tag match at WrestleMania 27, Michelle turned against Layla and feuded with her for weeks, leading to a Loser Leaves WWE match at Extreme Rules, which Michelle lost.

As a villainess, Michelle proved to be quite seductive, as she showed in her first run as a heel valet. She also was very vicious and ruthless in her attack and her in-ring delivery, and that was shown during her road to becoming a villainess in 2008 and 2009. Michelle also bullied a number of Divas, and she displayed a lot of arrogance in her roles.

Evil Michelle in her villainous seductive look
Add a photo to this gallery
Retrieved from "https://villains.fandom.com/wiki/Michelle_McCool?oldid=3542181"
Community content is available under CC-BY-SA unless otherwise noted.