Leader of the Wardens.

Above average strength
Can tell when he is being betrayed.

Capturing people and using them in his gladiatorial arena for entertainment.

Maintain control of his prison (succeeded)

Mick Cutler is a human antagonist in the videogame Resistance 3. He is the leader of a group of convicts known as the Wardens.

Mick Cutler is portrayed by Anthony De Longis, who also played Blade in the 1987 film Masters of the Universe, Culluh on Star Trek: Voyager, voiced the character Zygon in the 1985 animated film Starchaser: The Legend of Orin, Klaus Furschtein in the 1987 animated film The Chipmunk Adventure.

During the events of Resistance: Fall of Man, Mick Cutler was a former operative of the Special Research Projects Administration or S.R.P.A. (an American military organization that was tasked in studying and finding different conventional means in defeating the Chimera). The reason why Mick was incarcerated is unknown but it was most likely something extreme. He was sent and imprisoned in Graterford Prison in Skippack, Pennsylvania (a suburb of Philadelphia). In the course of Resistance 2, when the Chimera overrun the United States, Mick and the other inmates were freed when the prison guards abandoned the prison to avoid getting killed by the Chimera. Mick then became leader of the prisoners and dubbed themselves as the "Wardens", and decided to stay at the prison, where they used it as a fortress to protect themselves, and stay hidden from the Chimera. Mick ruled his fellow inmates with an iron fist, using fear and absolute barbarity to control and keep the former convicts in check. He even carefully outrooted and brutally disposed anyone opposing his leadership. Mick furthermore led raiding parties in attacking other human survivors and capturing them to be used in their own gladiatorial arena for entertainment. Another reason possibly could be that they were cannibalizing them, given the low amount of food that is kept in the prison and there is a dead human body that can be found in the kitchen of the prison cafeteria. Mick would resume control of the prison until Joseph Capelli arrived and eventually killed him.

During the year of 1957, Mick and the Wardens began exploring beyond their stronghold (possibly to find more victims or resources). While they were exploring Mt. Pleasant, they chased another survivor and after Mick killed him by stabbing him with a machette, they noticed Joseph Capelli and Dr. Malikov passing by on a train. Mick then sends his men to try to commandeer the train and kill Joseph and Malikov. After attempting to board the train, they were attacked by a huge pack of Widowmakers, killing many of Mick's men. The train gets derailed when one of the Widowmakers collides with it leaving Joseph and Malikov injured. Malikov gets up from the wreckage and tries to help Joseph get out of the wreckage. However, Mick brutally attacks Malikov and kills him by decapitating his head off with a machete, despite Joseph (who is still trapped) begging him not to. He then takes Joseph back to Graterford Prison. There he briefly meets Joseph, gives him a sledgehammer, and tells him "Welcome to the pen, boy". Mick then kicks him off a platform and into a gladiator arena. After Joseph kills several Grims, Leeches, and several of his men, Mick incapacitates Joseph with a magnum. He then has Joseph placed into a cell. Unaware to Mick, however, was that his lackey, Herbert, had released him, along with giving him a Mutator. Once discovering this, he ordered all of the Wardens to attack Joseph and Herbert before they could disable all of the security drones and alert the Chimera to their presence. This failed as the Chimera had discovered their stronghold and attacked. During the chaos, he hid the last drone in the arena. When Capelli attempted to disable it, he engaged Joseph in a brutal fist fight. Joseph eventually gained the upper hand and shot Mick in the head with his own magnum, then used the secondary fire, causing his head to explode.

Mick Cutler is a rather tall man, being about 7 feet tall. His eyes are blue but his left eye is blind after being stabbed at leaving a massive scar (this likely happened while he was still in prison), and had black hair but now brown hair. Mick wears torn black pants with a belt, a white shirt with blood on it, and a black jacket.

Mick Cutler is a ruthless, sadistic, narcissistic, arrogant, and controlling individual who cares for only himself and disregards anyone else, including his own men. He is very brutal towards others, as well as his own faction members. This is shown when he threatened to kill any Wardens that attempted to flee from the motorpool when the Chimera attacked it.

He shows intelligence, as he was able to lure Capelli and Herbert into a trap when they attempted to sabotage the prison drones. Mick also seems to be able to detect treachery, as in the case of Dick and Herbert. 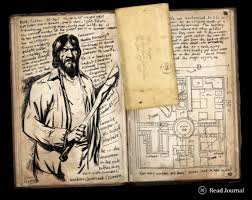 Mick's depiction in a journal entry.
Add a photo to this gallery 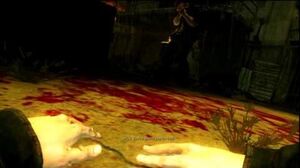 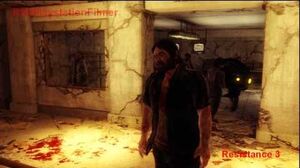 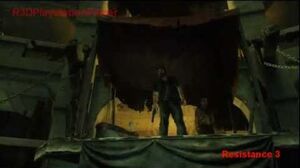 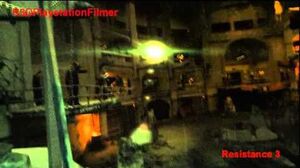 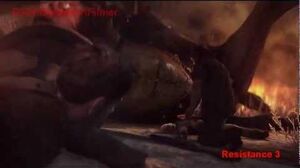 Resistance 3 Cutscenes Part 20
Add a photo to this gallery

Retrieved from "https://villains.fandom.com/wiki/Mick_Cutler?oldid=3926257"
Community content is available under CC-BY-SA unless otherwise noted.