Mick Foley (also known as faceted Mankind, Cactus Jack and Dude Love) is one of the most famous wrestlers of the WWE, known for his hardcore style of wrestling.

He has worked for many wrestling promotions, including WWE, WCW, ECW and TNA. He is often referred to as "The Hardcore Legend", a nickname he shares with Terry Funk. He is currently signed to WWE, appearing on the Raw brand.

Throughout his wrestling career, Foley has wrestled both under his real name and under various personas (most notably Dude Love, Cactus Jack and Mankind). He is a four-time World Champion (three WWF Championships, and one TNA World Heavyweight Championship). He is an 11-time Tag Team Champion (eight WWF Tag Team Titles, two ECW Tag Team Titles, and one WCW World Tag Team Championship). He was also the first WWF Hardcore Champion, and held the TNA Legends (now Television) Championship once. Following his retirement from wrestling full-time, Foley appeared occasionally with WWE as a special guest referee and later as a color commentator for the SmackDown brand. Upon his departure from WWE in 2008, he signed with TNA, where he was a storyline stock holder of the company. All totaled, Foley has won 17 championships between WCW, ECW, WWF/E, and TNA.

Despite the fact that Foley is not considered villain today, early in his career he often was a heel. During his time in WCW and ECW, Mick Foley was known as the sadistic "Cactus Jack" and he became a well known heel for feuding with Sting during his time in WCW and feuding with Terry Funk in ECW. He had a high tolerance for pain, and brutalized his opponents with weapons.

He first entered the WWF in 1996 as the deranged and schizophrenic Mankind, who was a dark character that wore a mask because he believed himself to be ugly and disfigured, ranted against humanity, and fought in a violent hardcore style never seen in the WWF at that time, with his finishing move the mandible claw forcing his opponents into unconsciousness. Foremost among his early feuds was the one against The Undertaker. During this feud Paul Bearer betrayed the Undertaker to join Mankind and become his manager, and together they used underhanded tactics to try to defeat him. The next year in 1997 Mankind partnered with Kane, causing more destruction, feuding more with the Undertaker and others. During one interview with Jim Ross he discussed his dark past where he was bullied in school and known as a freak who would never be loved. At the end of the interview he gave Jim Ross a mandible claw because he thought Ross was making fun of him. But in 1998 Mankind began to break character, his other split personalities Dude Love and Cactus Jack came out more often, and even as Mankind he became a more childish and goofy character. Mick also was minor heel as Dude Love when he attacked Stone Cold and join Vince McMahon's Corporation. As Dude Love he would purposely wrestle boring matches to annoy the fans. However, by 2000, he was more or less just known as himself, Mick Foley, and was a face.

He briefly was a heel again when he teamed with Edge for the event One Night Stand against Tommy Dreamer and Terry Funk. 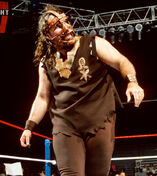