Jackaroo at a herding station (formerly)

Hunting and killing foreigners, be they men, women or children.

Michael "Mick" Taylor is the main antagonist of the Wolf Creek film series, as well as the 2016 mini-series of the same name. He is also the main protagonist of Wolf Creek: Origins and Wolf Creek: Desolation Games.

He is an extremely sadistic and bloodthirsty serial killer who enjoys kidnapping and murdering tourists from the Australian Outback after deceptively gaining their trust. A ruthless and psychopathic madman to the core, Mick brutally tortures his victims as well as sexually assaulting and mutilating them.

The character was portrayed by John Jarratt.

He claims that his performance was so convincing he was unable to get work for two years following the release of the first film. Jarratt's performance has been highly praised and has since been thought of as one of the great horror heavies in film. Jarratt's evil laugh, which he claims took four months to get just right, gave costarring actress Cassandra Magrath nightmares.

The character's personality traits were modeled after Jarratt's father (though he stresses that the psychotic killer part was added) and the character is styled after the polar opposite of Crocodile Dundee.

Mick is a murderous, unpleasant, manipulative, opprobrious, deceitful, vicious, and clever man who seems nice, but ultimately is an extremely traitorous, dangerous, and uncaring individual who is sexually obsessed with torturing, raping, and murdering women particularly, although he will also kill the men they are with, usually leaving them to die. He is so depraved that he even chases and kills children.

He usually begins by stalking victims before rendering their car immobile and later arriving to offer help. He offers to tow them back to his camp. If they oblige, the victims are drugged and tortured. If they refuse, the victims are murdered on the spot. Mick will also toy with victims, like pretending to shoot them or freak them out with bizarre behavior before revealing his true colors.

A proud xenophobe, Mick spent time in Vietnam raping and killing local women. He is also hypocritical, as he often claims to his victims that they are not welcome in Australia, yet killed many Australians as shown in Wolf Creek: Origins.

An untrustworthy and treacherous man, he will display increasingly unstable traits such as a psychotic glare before drugging his victims. He may also be cannibalistic, but this has yet to be confirmed.

Little is known about the character to keep him more ominous; however, Jarratt created a detailed biography for the character to base his performance off. He has not released this information. 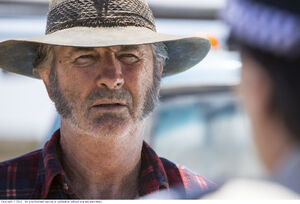