Kill Jack Dragna and his team and then to build a widespread wire gambling business and to take over Los Angeles.

Kill anyone who opposes or stands in his way (both failed).

Meyer Harris "Mickey" Cohen is the main antagonist of the 2013 film Gangster Squad. He is a gangland boss who is based of the real-life character in Los Angeles.

He was portrayed by Sean Penn, who also played Mick O'Brien in Bad Boys, David Kleinfeld in Carlito's Way, and Sergeant Tony Maserve in Casualties of War.

Based on the real gangster of the same name, Mickey Cohen was born on September 4, 1913. He is an avid boxer, and is quickly known to handle business in a professional manner, as well as a brutal one, like most mobsters. Despite his criminal record, he is often portrayed by the media as a celebrity, especially in one part where he enters the club with his girlfriend Grace Faraday. He dreams of the day to have total control of all organized crime and to have Los Angeles in his own bare hands, with no one to stop him, not even the Los Angeles Police Department.

One night in 1949 Los Angeles, Mickey Cohen was with his henchmen, near the Hollywood hills, with a man who was chained up between two cars and another who was being held at gunpoint. The chained up man was pulled apart to death while Cohen told the other man that Los Angeles will be his and to spread the word.

After a man spilled his confession to Sergeant Detective John O'Mara after attempting to rape a woman, Cohen has a talk with him in a building. Cohen assures him he will not make this mistake again, hinting he wanted him dead. He is burned alive with his buddies inside an elevator shaft.

He is later at Slapsy Maxie's with his girlfriend Grace Faraday and has a talk about his plans for ruling the city. The next night he goes for dinner with Faraday, and he has a conversation with Jack Dragna about his destiny and how he will take over all his operations in Los Angeles. He then dances with Grace when he luckily survives an attempt on his life by Jerry Wooters, not knowing he was present, following a shooting of his men destroying property and killing a young boy.

Then he is in a financial building, the El Dorado Trust, where he talks with his associates opting to start a business. Cohen sends his henchmen and bodyguard Johnny Stompanato to kill Dragna in his home. He comes home to his mansion for some tea unaware his place was being wire tapped by the "Gangster Squad", who would listen on every one of his operations in the city.

Cohen reads the paper headlining the Gangster Squad and he demands them to be killed. He later brags about how people are always trying to steal what's his. The next night, he discovers his secret trust in Slapsy Maxie's was burned and attacked by the Gangster Squad, eventually finding out they are cops since they did not take the money with them. He hires a man to use a metal detector, to find they have indeed been listening in on his operations through his television.

Cohen's bodyguard kills Conway Keeler while his henchmen ransack the outside of O'Mara's home, with his wife giving birth by stress. Then Cohen himself personally kills Jack Whalen in his swimming pool.

In a hotel, while having lobster, he awaits the arrival of the Gangster Squad, who now have a witness and a warrant for his arrest. A shootout ensues and the Gangster Squad take out Cohen's men one by one. He puts on his tie and then tries his hand at killing the cops using his 100 round Tommy Gun. He then attempts to flee but O'Mara sends his car crashing into a water fountain.

Instead of arresting him right away, O'Mara challenges Mickey Cohen to a fist fight. Cohen proves to have the upper hand at first, delivering a few punches to O'Mara's nose and brow. But then O'Mara starts to pick it up and send Cohen's head through the car window, flip him over, and punch him while he was on the ground when ongoing spectators, news, and police would show up. O'Mara wins the fight and knocks down Cohen, all bloodied and wet, who would subsequently be arrested by the LAPD.

In a narration, O'Mara quotes how friends of Jack Whalen greeted Cohen by clobbering him with a lead pipe in Alcatraz. 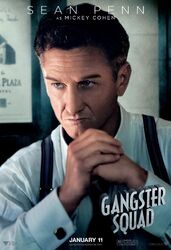 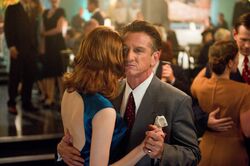 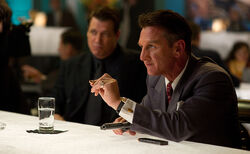 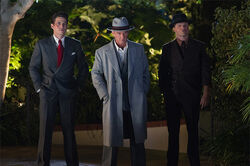 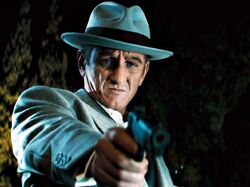 Mickey Cohen about to murder Whalen. He was unaware that Grace was a witness. 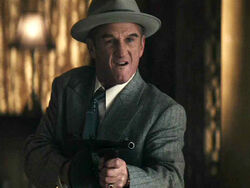 Mickey Cohen holding his Tommy Gun in the gunfight with the Gangster Squad.

Detective O'Mara is seemingly about to arrest Cohen, who shows surrender. 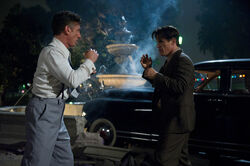 Cohen and O'Mara have a fistfight.