Owner of the Walt Disney Company

Verbally and physically assaulting his staff.

Plotting world domination of Disney.
Having fun with Randy Marsh.

Make as much money as possible through abuse and villainous acts (ongoing).
Use the Jonas Brothers to sell purity rings to little girls with sex euphemisms to deceive Christian families and profit off of it (failed).
Get the ballots so that he can keep ownership over Star Wars (failed, but then succeeded).
Profit off of China (ongoing; succeeded so far).
Have Randy Marsh killed to undo COVID-19 (formerly).
Overcome COVID-19 (ongoing).

Mickey Mouse is a major antagonist in South Park.

He is based off the icon of the Walt Disney Company and one of the most recognized animated characters in the world. Unlike his original counterpart who is the mascot of Disney, as well as the protagonist of his own media franchise, he is the owner of Disney and continuously wishes to gain more profit, such as through the Jonas Brothers and China.

He is voiced by Trey Parker who also voices other characters in the series, including Eric Cartman as well as Kim Jong-il in Team America: World Police and Balthazar Bratt in Despicable Me 3.

Although he is portrayed as a good character in "Imaginationland", he changes sides in "The Ring". In this episode, Mickey is given a more prominent role, where he is seen as the owner of the Disney Company and boss to the Jonas Brothers. Mickey is portrayed as an evil, money-hungry, foul-mouthed corporate mogul who is both verbally and physically abusive to his employees (including other Disney, Marvel and Star Wars characters). For example, when Joe Jonas states that he would quit, Mickey punches Joe in the balls and begins kicking his face, then forcing him to get up. It should be noted that Mickey says his trademark "Ha-ha!" laugh at the end of most of most of his sentences, which in context, comes off like a nervous tic.

He is, in truth, a parody of his true self. Instead of being good-natured and kind, he is vindictive and cruel. Yet, like many South Park villains, he keeps a kind of twisted charm due to his dark humor. South Park's version of Mickey Mouse appeared in the episode "The Ring" - which dealt with the controversies of sexuality in bands such as the Jonas Bros and made a brief appearance in the episodes "200" and "201" as one of the celebrities whom Tom Cruise recruited as part of his Legion of Doom to sue the town.

Mickey Mouse is behind a highly immoral conspiracy to force the Jonas Bros into promoting purity rings in an effort to actually sell sex to young girls while making it seem innocent and pure: unlike the real Mickey Mouse he is also highly sadistic and foul-mouthed, going as far as violently beating the Jonas Bros if they defy him. Mickey Mouse gets into a confrontation with the South Park boys after his conspiracy starts to threaten their friend Kenny and he believes they were spies from Dreamworks and had them tranquilized and taken prisoner.

Mickey Mouse proceeds to go completely insane, insulting the Jonas Bros fans and Christains while threatening the boys with a chainsaw - during this rant Kyle manages to turn on the microphone, while Cartman (in one of his few good acts) raises the curtain, exposing Mickey's rant to the entire audience. When the audience boos and hisses at Mickey, the mascot becomes a demonic destroyer. Growing to gigantic size, almost taking on the appearance of a parade balloon, and going on a rampage, he proceeds to destroy Denver in a fiery wrath. It is unknown what happens after this.

Mickey returns to Colorado when he buys rights to Star Wars and the Chinese try to obtain it from President Obama. Until Eric Cartman steals the missing ballots to have a part in the movies.

Mickey reappears once again in the episode "Band in China" where upon hearing of Randy Marsh criticizing the Chinese government for the way it treats its prisoners, he angrily confronts Marsh on the account of this costing him Chinese business. However, Randy keeps tight on his belief that business should not be conducted on the basis of intimidation and presents his marijuana import idea to Mouse after which they strike a deal. When their case for the Chinese government turns out fruitless, Randy lures Winnie the Pooh (whom Mickey attributed the matter to due to Pooh being banned there) to a secluded area and strangles him to death while Piglet watches in horror, allowing Tegridy Weed to become legal in China.

Mickey's personality in South Park is drastically different from his appearances in his native Disney material. While the original Mickey Mouse is shown to be friendly, empathetic and cheery, the similar character in South Park is almost the exact opposite of this.

Mickey is an evil, money-hungry, foul-mouthed and self-centered corporate mogul who is both verbally and physically abusive to his employees. He is also threatening, ruthless, merciless, aggressive, mysterious, greedy, scheming, terrifying, sadistic, bloodthirsty, sinister, cruel, treacherous and manipulative. For example, when Joe Jonas states that he would quit, Mickey punches Joe in the balls, and begins kicking his face, then forcing him to get up. It should be noted that Mickey says his trademark "Ha-ha!" laugh at the end of most of his sentences, which in context, comes off like a nervous tic. Also, Mickey appears to be insane, threatening to kill Stan Marsh, Kyle Broflovski, Eric Cartman and the Jonas Brothers with a chainsaw in order to prevent them from ruining his concert.

Unlike Donald Duck's popularity, Mickey Mouse is considered to be called 'Colorado's Disney Villain' because Colorado is where South Park is located. 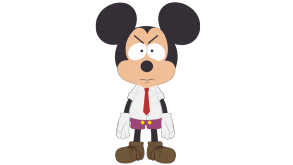 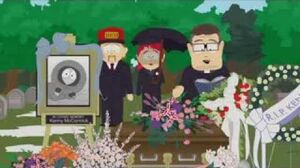 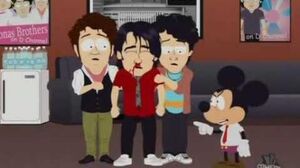