Villainess, Arrogant Villain, Stalker, Psychopath
Mickie James is a female professional wrestler who is best known for her time in WWE and TNA. In WWE, she held the Women's Championship five times and the Divas Championship once. In TNA, she held the Knockouts Championship on three occasions. As both a Diva and a Knockout, Mickie has served as a villainess on one occasion each.

Mickie James initially went by the ring name Alexis Laree, working as a manager for Tommy Dreamer in the KYDA promotion. Laree was best known as a baby face, especially after making the transition from valet to wrestler, but worked as villainess in Bad Boys Of Wrestling, as a Road Warrior imitator, and in NWA:TNA, where she, Julio Dinero and CM Punk were brainwashed into serving the villainous Raven.

In her combined time as a Diva and a Knockout, Mickie has been a face and a heel on numerous occasions, but she has rarely acted as a villain. In one rare heel stint in WWE, Mickie acted as an obsessed fan of Trish Stratus , which became more and more twisted as time went by; to the point where she has kissed Trish once and tried to do so a number of times. Mickie's advances were often rebuffed, and it led to her unleashing her villainous side by attacking Trish in the ring. After winning her first WWE Women's Championship at Wrestlemania 22, Mickie walked around dressed as Trish, even going as far as stating that she is Trish Stratus. Later on, it was revealed that she may have done these same psychotic things to Beth Phoenix, but not much more would be revealed.

Mickie would work as a face for the rest of her WWE career and would return to TNA as a baby face in 2010. However, in 2012, Mickie turned heel in her match against Velvet Sky on February 9 in the UK, which was won by Velvet. Four months later, Mickie was on the verge of fully becoming a villainess due to jealousy of Velvet, who was chosen to appear in Montgomery Gentry's latest music video. During a #1 Contender's four way match that also included Brooke Tessmacher and Tara, Mickie snarled at Velvet in a jealous rage and targeted her. The angle between Mickie and Velvet ended when the latter left TNA.

It was in April 2013 that Mickie began her transition into a heel Knockout. After a year and a half out of the Knockouts Championship picture, Mickie became #1 Contender on April 18 and received her shot a week later against Velvet Sky. Knowing that Velvet had a bad right knee, Mickie targeted that body part throughout the match. Despite her villainous methods, Mickie lost to Velvet, and she was very upset after the match ended. Mickie vowed that she would be more vicious and heartless the next time she faced Velvet, and she would receive another opportunity on May 23. Mickie continued portraying a heel by slapping Velvet and later delivering a chopblock to her bad knee, leading to her Knockouts Championship victory.

For weeks, Mickie avoided Velvet's requests for a rematch by claiming that Velvet's not 100%. However, on June 13, Velvet showed Mickie a note from her doctor that said that she was healthy and cleared to compete. At that moment, the evil Mickie attacked Velvet by kicking her injured knee and placing her in a submission move; becoming a villainess for the first time since 2006. Weeks after she defeated Velvet in their rematch, Mickie defended her villainous actions by stating that she'll scratch and claw to climb the ladder in the Knockouts Division; which she symbolized by climbing an actual ladder placed in the middle of the ring. Mickie laughed evilly and stated that she'll go down in history as the greatest Knockouts Champion in history, and that no woman will be as great as her. Mickie went on to defeat Gail Kim as well, before beginning a feud with ODB. Mickie's run as a villainous Knockout ended when she left TNA after she lost the Knockouts Championship to ODB in September.

On November 30, 2014, Mickie competed in her first match since giving birth to her son, doing so against Tessa Blanchard at Queens of Combat's third show in Winston-Salem, North Carolina. The match began as a face vs face affair, but at the mid-point, Mickie turned into a villain and resorted to immoral methods to defeat Tessa, including pulling Tessa's hair and attempting to use one of the ropes for leverage. Mickie went on to defeat Tessa with a superkick.

Mickie returned to WWE on the October 26, 2016 edition of NXT, and challenged Asuka to a match for the NXT Women's Championship. Her title opportunity came on November 19 at NXT Takeover: Toronto, where she was defeated by Asuka. Mickie turned villainous on the January 17, 2017 edition of SmackDown Live, when she was revealed as the mysterious La Luchadora who had been targeting Becky Lynch. During a main event SmackDown Women's Championship steel cage match between Becky and champion Alexa Bliss, the evil Mickie appeared in her La Luchadora attire and prevented Becky from escaping the cage. She later attacked Becky while she had Alexa in her Dis-Arm-Her submission, eventually costing Becky the title. After the match, Alexa and Mickie attacked Becky, who later fought back and unmasked Mickie. The assault continued after Mickie's villainous reveal, cementing Mickie's alliance with Alexa.

Mickie's alliance with Alexa ended in the weeks leading to WrestleMania, where she failed to capture the SmackDown Women's Championship in a six pack challenge. On April 10, Mickie was moved to Raw in the Superstar Shake-Up, and feuded with Alexa (who also switched) and Emma during her babyface run. However, in the weeks leading up to the 2018 Elimination Chamber PPV, Mickie teased a reunion with Alexa, doing so in various segments and tag team matches—whether they were teammates or opponents. At the PPV, Mickie failed to capture the Raw Women's Championship in the first-ever Women's Elimination Chamber Match, as she was eliminated by Bayley.

On the following night's Raw, Mickie helped Alexa attack Asuka, turning heel once again. The attack led to a six woman tag team match, with Mickie on the losing end against Asuka, Sasha Banks, and Bayley. A live event in just days later actually saw Mickie on the babyface side of an eight woman tag team match, but during the final moments, Mickie turned heel and attacked Bayley in an attempt to help Alexa pin her. Asuka picked up the victory for her team, despite Mickie's heel persona.

As a villainess, Mickie was arrogant, self-centered, and she thought that every bad thing she did was justifiable. She was also prone to jealousy and fits of anger, which was proven in her feuds with Velvet Sky and Trish Stratus, respectively. 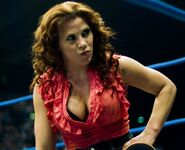 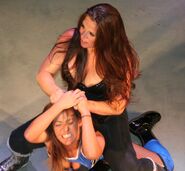 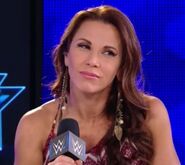 Add a photo to this gallery
Retrieved from "https://villains.fandom.com/wiki/Mickie_James?oldid=3704599"
Community content is available under CC-BY-SA unless otherwise noted.