Incriminate Ben Campbell to be a cheater to keep himself safe.
Escape Las Vegas to survive the conflict and continue his crimes to obtain an umpteen quantum of funds (all failed).

Micky Rosa is the main antagonist of the 2008 heist movie 21.

He was portrayed by Kevin Spacey, who also played Albert Benton in Unsub, Buddy Ackerman in Swimming with Sharks, Keyser Söze in The Usual Suspects, John Doe in Se7en, Rufus Buckley in A Time to Kill, Hopper in A Bug's Life, Lex Luthor in Superman Returns, Clyde Northcutt in Fred Claus, David Harken in the Horrible Bosses duology, Dr. Nerse in The Cleveland Show, Frank Underwood in House of Cards and Jonathan Irons in Call of Duty: Advanced Warfare.

A math professor at MIT, Micky tests Ben (the main protagonist) with the Monty Hall problem and Ben solves it. Then he looks at Ben's non-linear equations score which is 97% and this leads to Ben joining Rosa's blackjack team. The team consists of card counting and is divided in 2 groups. Ben says he only agrees to participate so he can pay for med school.

The team go to Las Vegas and through innumerable weekends, Ben finds that he enjoys the high-dollar life of being a big player. Rosa later cuts Fisher, member of his team and fool, after Fisher insults Ben and does a melee in which Rosa and the team race to cash in their chips before the casino swaps out, a practice after a fight. In the meantime, security chief Cole watches the blackjack team of Rosa and Ben gets sidetracked by blackjack and does not complete his part of an engineering competition, and he also loses his pre-blackjack friends. Ben's next trip to Las Vegas turns into a disaster when he loses $200,000.00 and Rosa furiously leaves the team and says to Ben he'll pay him back sooner or later.

Then Rosa betrays Ben by informing Williams of him and Williams beats Ben up and then frees him with a deadly warning. When Ben returns to MIT, he learns that he's been given an incomplete grade in a class, which hurts his graduation, and all his winnings and money have been stolen from his room. He knows Rosa is behind all this but can't prove it and makes amends with his blackjack friends and then makes a deal with Rosa of returning to Las Vegas for one last attempt before the casinos put in biometric software, that will hunt card counters down if Rosa, who was a great big player, also plays with them.

All in agreement, they return to Las Vegas winning $640,000.00 before leaving with their chips from Williams and his men on to them. Ben and Rosa split up, with Rosa getting the bag of chips, and escaping in a cab. Rosa plans to steal the money but discovers the bag is full of chocolate candy chips and the casino manager is driving him. It turns out that Ben and Williams made a deal that Williams would allow Ben to return for one night and win a lot of money, in exchange for Rosa, because when Rosa and Williams were younger, Rosa won a seven figure sum at William's casino by counting cards, in which Williams lost a pit boss job and his beloved father in Barstow. Later Williams confronts the captured Rosa and states that he will invite him to a guy who works with the IRS much to his dismay. Rosa is later on arrested by the IRS. 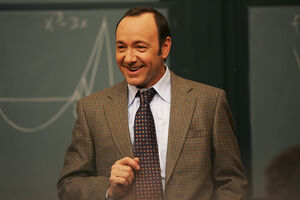