Grant the gift of life to those who come to his power.

Destroying the one who takes away their treasures.

Tear down his altar so as not to be in sight of any mortal, to be found (succeeded).

Mictlantecuhtli (or called simply Mictlan) is an Aztec deity of the underworld and the dead and he serves as the main antagonist in the third sequel from the Mexican cartoon film La Leyenda de las Momias de Guanajuato.

Hidden underground in the depths of the mine, Rousseau wanted to come to his aid to revive his beloved Denise, but he did not succeed as expected and with the ritual intervened, the god's power resuscitated the so-called mummies from Guanajuato city.

A giant statue that reflects the appearance of the god of the dead, located on an altar and two of his hands holds two fountains, one red and blue which represent life with death. In between a pond full of treasures, which none should touch or steal, if not otherwise; the eyes of the statue of Mictlan, shine and take the life of said miser, making him disappear. Its not known who built it or the origin of it, possibly it was a possession of the Aztec god.

The construction of this strange monument dates back many hundreds of years, and it is still unknown if some worshipers had to see it, or it would have been a divine intervention. Being hidden in the darkest and deepest underground caverns.

Which would later become a mining company called "Los Siete Dolores" and would be discovered by a french richman. Mictlantecuhtli resurrected all the deceased people, because of touching his forbidden possession and as punishment, caused the mummies to terrorize people, but they turned out to be the least frightening.

Resorting to awakening the bodies of the inmates who died in a burning, causing destruction everywhere.

The time of the kidnapping, Rousseau used the body of Leo San Juan to sacrifice it and bring Denise to life. Without success, the beloved opposed the idea for the terrible actions of her lover. So, Rousseau indignant approached both the sacred pond, which Mictlan erase it from existence. The entire statue collapsing when Leo San Juan put the two crystals in the bright fountains, and himself god fulminated them. 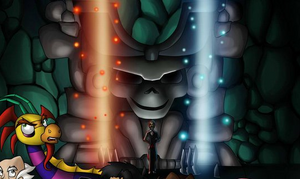 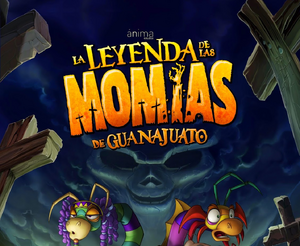 Mictlan in the movie's cover. 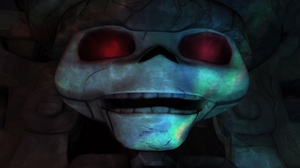 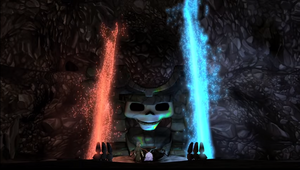 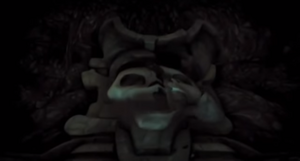 Retrieved from "https://villains.fandom.com/wiki/Mictlan?oldid=3890800"
Community content is available under CC-BY-SA unless otherwise noted.