Member of the student council
President of the Beautification Council

Stalking Yumeko.
Trying to get others to kill her.

Get Kirari to kill her by joining the student council (ongoing).

Midari Ikishima is a supporting character in the anime and manga series, Kakegurui and a main protagonist of the spin-off series, Kakegurui Midari. She is a second-year student at Hyakkaou Private Academy, a member of the student council and the president of the Beautification Council.

In the original Japanese version, Midari is voiced by Mariya Ise, while the English dub has her being voiced by Sarah Anne Williams. Ise also voices Stocking in Panty & Stocking with Garterbelt, Hinako Akuta in Fate/Grand Order, Lucia in A Certain Magical Index, and Bellina in Dragalia Lost. While Williams also voices Jinx in League of Legends, Laevatein in Fire Emblem Heroes, Nonon Jakuzure in Kill La Kill, and Susamaru in Demon Slayer: Kimetsu no Yaiba. While she is portrayed by Miki Yanagi in live-action. In Sentai English dub, Midari is voiced by Natalie Rial.

Midari is the head of the Beautification Club of the student council. She has an obsession with Yumeko. When she, after being reduced to house pet status, is harrassed by a group of male students, Midari defended the former by pulling a gun on the males. Upon hearing the rumors about Yumeko's gambling addiction, Midari realizes she may be the opponent she's been looking for and kidnaps Yumeko (alongside Ryota) to force her into a game before she can challenge Kirari, who Midari believes would 'decimate' her.

Midari is pale skinned girl with short black hair styled in a concave-cut and incredibly small pupils. Her eyes, while implied to be yellow-green in the anime, are purple in the manga. She wears an unusual form of the Hyakkaou Private Academy uniform; as rather than the traditional outfit, she instead wears a sweater vest in the same colors as the school's black and red blazer, She also sports purple lipstick and has purple painted fingernails. She forgoes the black tie and also has multiple accessories, including a purple headband with a heart-patterned bow attached, and purple wrist cuffs with stripes on each one. She has bandages wrapped on both forearms and sports a white medical eyepatch over her left eye (due to an incident involving her tearing it out in order to pay her debt to Kirari). She also has several facial piercings, with two being under her mouth, on the left side, and one piercing on both ears as well as on her tongue.

Midari has an incredibly masochistic and suicidal personality, so much so that said traits are outright stated in one of the chapters in the manga which has her ripping out her own eye with a ink pen in order to pay off the debt owed to the president of the student council. She's also shown to be very persistent and overbearing, intimidating or simply plain weird to the other students, such as when playing a sadistic game of life or death with Yumeko Jabami. She is also very impulsive and has little self-restraint, causing her to look more at immediate satisfaction than any long-term consequences. Due to the fact that no one wants to play sadistic games with her, she is desperate to gamble with anyone and constantly awaits to 'get off', as stated in a chapter of the manga, by creating dangerous games where one player ends up dead.

She even enjoys a game with Erimi Mushibami (one of the members from The Hundred Devouring Families) in which the risk is losing your finger, but she then turns disappointed when said risk disappears. Midari is also a very selfish and narrow-minded person, rarely caring for others' thoughts or well-being and being brutally honest sometimes. She assumes that her mindset is the norm. She is never concerned with money when gambling, as shown when she carelessly bets enormous sums with no concerns nor worries about the potential debt that could come as a consequence. She doesn't even clearly remember nor clarify how much money she owns before she begins gambling. Instead, she says she seeks out the risk of being harmed. Midari tends to be fond of people who represent a source of danger to her, to put it lightly. She doesn't even resent Kirari Momobami for causing her lose an eye and, on the contrary, actually considers her a wonderful woman. Moreover, even when she is not personally affected, she hates people who consider suicide but are not ready to go through with it, as seen when she rescues Ayame Nureba.

It has also been noted that, despite her bizarre behavior, Midari is intelligent and competent in academics, as seen in her flashbacks where she had won numerous awards, medals, and achievements during her middle school days. At the same time, she believes that studying a lot does not make someone a "genius", as noted in her criticism of Sayaka's behavior. Midari also takes her role as Beautification council president quite serious, mostly since it gives her the freedom to hold dangerous gambles. Midari has been shown to perspective enough to tell the true characters of others, as seen with Sayaka, Sakura and Kirari.

After her plan to be killed was ruined, Midari developed an deep infatuation for Yumeko. She considers her a "goddess" and has often praised her gambling skills and unpredictable behavior, something that greatly charms her. She was shown keeping photos of Yumeko on her phone and the mere thought of her gaze seems to send her in a frenzy of excitement. Every time they meet she tries to catch her attention, but her attempts are futile. In spite of her fondness for pain, Midari doesn't want to be hated by Yumeko and gets depressed every time she is ignored or berated by her. Midari also seems to believe that Ryota's relationship with Yumeko is one of "control", just like master and slave, and feels jealous of him for being close to her. At the same time, she acknowledges Ryota as one of Yumeko's friends and asked him for advice in the anime.

Midari excited to cut a thread of the guillotine 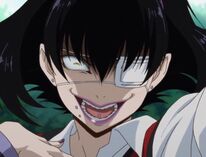 Midari screaming at Jun to shoot her

Midari about to stab her eye out