Rolling into a ball
Cryokinesis

Take over the world along with Fawful.

Stop Bowser in any way possible (both failed).

Midbus is the secondary antagonist of the 2009 Nintendo video game Mario & Luigi: Bowser's Inside Story and its 2019 remake. He is Fawful's personal enforcer and Bowser's arch-rival throughout the entire game up until his final defeat.

Midbus is shown to be dimwitted, as he is shown to speak in sentences in poor English, but is full of pride as he was a rival towards Bowser in terms of strength. He is also shown to be very gluttonous as a pig as he was shown to be eating food thrown by the crowd watching him and Bowser fight. He was also shown to be loyal to Fawful and very protective towards him. However, in the end, his persistence became his undoing.

Midbus has the appearance of a combination between a boar and an armadillo. He is pink with a boar's face, black horns on the side of his forehead, and a light yellow backside. He can also curl into a ball similarly to an armadillo. When transformed into Blizzard Midbus, he turns blue in color, and his backside grows a fur coat, like a mammoth. He also gains a crown to shoot out Snawfuls to help him fight against Bowser and regain health.

Sometime after the events of Mario and Luigi; Superstar Saga, Fawful found and made a very close friend out of Midbus. It is clear that he was probably found before Partner's in Time since Fawful clearly had some form of takeover plan in that game. It is unclear how they met, since this wasn't relevant to the game's plot, but it is possible that Fawful saved his life or rescued him. He became Fawful's second-in-command.

After finding out that Fawful is the person who fed him the Lucky Shroom and wants to conquer the Mushroom Kingdom, Bowser quickly attacks him. Midbus enters and pushes him back, saying that he is foolish. Bowser does not like what he hears and the battle commences. During the battle, Fawful gives a tutorial and alerts Midbus about Bowser's attacks. After Bowser takes a hit from Midbus, he feels cruddy from swallowing the Lucky Shroom. Midbus sees how weak Bowser is and exclaims that it is pointless, and says he should challenge him again when he gets stronger. Fawful then tells Bowser that he will now take over his castle first, then carry out the rest of his plan.

They leave headed toward his castle, with Bowser following all the way. After Bowser and the Elite Trio fired on Bowser's Castle, Midbus ordered the castle take flight to protect Fawful who was inside the Castle and they crush Bowser. He is utterly horrified at Bowser after he grew giant and led the attack using Bowser's Castle but it was defeated and cripplingly damaged. Midbus re-emerged afterwards and was set on fire only to withdraw back to Dark Land, refusing to fight Bowser until he shrunk down.

Later, in Fawful's Theatre, Midbus was summoned by Fawful to defend him and fight it out. When Midbus is defeated, he is dragged off-stage by some Goombas and Fawful uses the Boos to make Bowser chubby by forcing him to eat a lot of the food Fawful made for whoever won the battle. Midbus is then seen along with Fawful when he changes his plan by getting Princess Peach out of Bowser's body in order to get the Dark Star. He then provides a treadmill below Bowser and then walks away as Fawful was struggling to carry Princess Peach, making Fawful angrily call out Midbus for help. Midbus later confonts Mario and Luigi when they arrive at peaches cassle. He sends a robot named Junker to take them down. When Bowser finally explores the depths of Peach's Castle (which Fawful now controls), he confronts Midbus for the final time. However, Fawful upgrades Midbus to a stronger version of himself known as "Blizzard Midbus". When Blizzard Midbus is defeated, his entire body except the head freezes up with the head spewing ice cold breath. You can access the Airway when this occurs at which point Mario and Luigi go after the Dark Star which had fled into Bowser.

After Fawful and the Dark Star's defeat, it is unknown what happens to Midbus afterwards since he remains frozen in that spot for the remainder of the game. Given his frozen status, he was probably placed into cold storage in Bowser's Castle like the Shroobs were.

Bowser's first fight against Midbus acts as a tutorial boss for the Koopa King, where the only move he performs is curling into a ball and rolling towards Bowser. At the beginning, Fawful warns Midbus about Bowser's punch, going into detail in a way that displays how the move's action command works. On his turn, Bowser can wind up his punch and deal more damage by pressing X Button as late as possible, while avoiding waiting too long and losing his balance (with Fawful's warnings showing the proper timing). The same is done for Bowser's counterattack punch (though he can use this prior to the tutorial if Midbus goes first). After Midbus takes enough damage, the fight ends when he uses a Ground Pound-like attack that Bowser cannot counter; while this does not KO him, the Vacuum Mushroom's effects begin to weaken Bowser, leaving him unable to continue and automatically ends the fight.

During the second battle, Midbus uses a wider variety of attacks. In the remake, he gains the Fury status after losing half his HP like most bosses, increasing the damage he deals. The Ground Pound-style move seen in the first battle returns: Midbus rolls up and belly flop several times before rolling directly above Bowser, who can now counter by ducking so that Midbus lands on his spiky shell and takes damage. Midbus may also land in front of him, creating a shockwave that can confuse Bowser or flip him over; Bowser must counter by punching Midbus just before he lands.

Midbus can run off-screen to grab a wrecking ball and return while swinging it rapidly. As Midbus approaches Bowser, he must duck and hold his position for a few seconds while Midbus swings the ball over him at a higher speed. If Bowser is hit or successfully dodges, Midbus continues spinning back, with the wrecking ball raised up high or angled low, before throwing it at Bowser. If the ball is up high, Bowser must duck the attack, and if angled low, Bowser must punch it away as it bounces towards him; being hit by the wrecking ball toss can render Bowser dizzy. In the remake, Midbus takes a couple of swings to pick up speed, usually meaning that Bowser must manually duck each one before holding his position for the longer swing.

Midbus has a third attack where he takes a deep breath, puffing himself up, and walks forward before storing energy for a massive uppercut, signified by him flashing. Bowser must rapidly punch Midbus's stomach to cancel the attack before he winds up and gets the punch off; if he fails to do so and the attack lands, it sends him flying upward, with Bowser taking heavy damage and possibly becoming dizzy or flipped over upon landing. Successfully countering causes Midbus to grab his belly in pain, and Bowser can land another counter punch as he stumbles forward briefly before returning to his position; in the remake, a successful counter now damages Midbus.

The audience will interact with both Midbus and Bowser during the fight: if Midbus lands any of his attacks on Bowser, they throw him coins (which are useless to him) and food, while if Bowser performs an "Excellent" action command on Midbus with any move (unless it KOs him), he will only receive six coins. The food remains on the stage, and Midbus eats it during his turn, while Bowser can punch the food off stage or inhale it to eat for himself, which will anger Midbus; donuts heal 10 HP, the cakes heal 20 HP, and the meat heals 50 HP and raises power for a few turns.

Blizzard Midbus has many different moves that can render Bowser sick or else trip him. He can run off-screen and return rolling on a colossal snowball, which has a Bob-omb lodged in it. Midbus then moves the snowball up towards Bowser, rolling it in place and preparing to flatten him with it; Bowser must punch the Bob-omb to knock them both back and set it off, the explosion destroying the snowball and damaging Blizzard Midbus. Once around of half of Blizzard Midbus's HP remains, he starts rolling the snowball in place and moving the Bob-omb before approaching Bowser; as his HP lowers further, he will push the Bob-omb into the snowball while rolling, forcing the player to memorize its position and making the attack more difficult to counter.

Blizzard Midbus can also leap towards the ceiling and throw anywhere between four and thirteen snowballs at Bowser. The snowballs will only actually hit Bowser if Midbus looks at him while throwing them; the ones thrown as Midbus looks away always miss. Bowser can avoid the attacks by ducking into his shell. In the original game, if Bowser successfully blocks at least three snowballs, Blizzard Midbus becomes angry and drops from the ceiling to attempt a sliding punch, and Bowser can counter it and damage him with a punch of his own. In Mario & Luigi: Bowser's Inside Story + Bowser Jr.'s Journey, if Bowser blocks all of the snowballs during the attack, Blizzard Midbus will curl into a ball instead and bounce off the ground before charging towards Bowser. If Midbus bounces backwards, he rolls straight at Bowser and must be countered with a punch; if Midbus bounces in place, he instead leaps and has to be countered using Bowser's shell.

Blizzard Midbus can also create a quartet of Snawfuls from his crown. On his turn, they can breathe icy mist at Blizzard Midbus; his power and defense increases for each Snawful, in addition to recovering 30 HP for each one. In addition to the stat increases, and he can use an additional Ground Pound attack: he leaps towards the wall on his end as the Snawfuls lob ice balls at Bowser, who must duck to avoid them. Midbus momentarily slips a few times while eventually making it to the top; from there, he watches Bowser for a few moments before rolling towards his wall, bouncing off it. He then attempts a Ground Pound, which Bowser can counter by ducking so that he lands on his spiky shell and takes damage; he can also continue bouncing off walls and straight towards Bowser, who must counter with a punch. The timing of the Snawfuls' ice balls can make properly countering this attack difficult.

Bowser can defeat the Snawfuls normally, causing them to melt away, though Midbus will eventually create more. Bowser can also inhale the Snawfuls, allowing Mario and Luigi to battle them inside his body. If the Bros. defeat at least five of them, Bowser exhales the icy mist they release upon defeat, and it freezes into an ice chunk that lands on top of Blizzard Midbus' crown, preventing him from creating any more Snawfuls.

Like most bosses in Mario & Luigi: Bowser's Inside Story + Bowser Jr.'s Journey, Blizzard Midbus gains the Fury status upon losing half his HP or more, and begins using more powerful and faster attacks more often each turn. 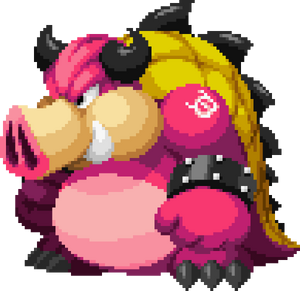 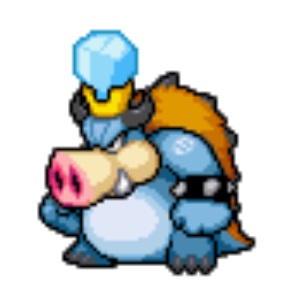 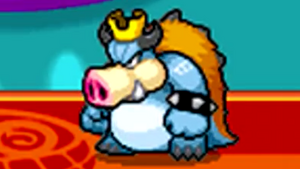 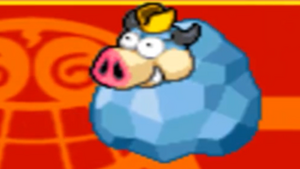 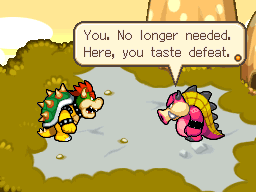 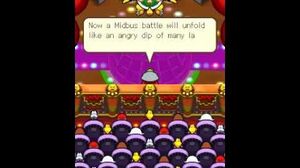 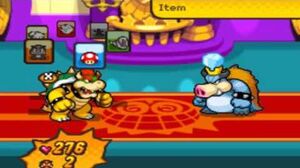 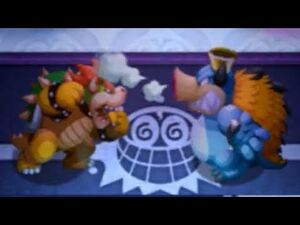