Vengeful Evil Creation
M1dn1ght, also known as Midnight, is a supervillain in the DC Universe who first appeared in Superwoman #15. She is a computer code incarnate created by Lena Luthor and unintentionally brought to life by Superwoman.

When Lena Luthor began her path to become the villainous Ultrawoman, she knew she would have found opposition, and she created a fail-safe just in case she would have been stopped: she programmed M1dn1ght (or Midnight), a virus that was “Code Incarnate“, a semi-sentient computer program whose main protocol would have been freeing her. Lena’s precaution proved to be a life-saver: Ultrawoman did fight against a heroine, the new Superwoman, who managed to lock her in a trans-dimensional prison. The moment Superwoman hit Lena with her Solar Flare, Midnight was activated, and she found herself in the Void (or V01d), a digital vacuum in which only she and her protocol existed. It took time for Midnight to gather enough energy to obtain a form of sentience, but as soon as she did she immediately initiated the protocol: she first manifested through a computer in the engineering office of Metropolis Transit Authority, opening an “energy hole“, a singularity that allowed her to relocate energy in any form, matter included, into the Void. Her task was simple: she had to “actualize” herself, obtaining enough energy and matter to appear into the physical world, and she did so by “borrowing” it from living people. She first absorbed an employee doing the night shift, a man who referred to himself as “Danny Boy“, and brought him to the Void. He was but the first of hundreds of people Midnight started abducting from all over Metropolis, and everytime she brought someone to the Void, she obtained more substance, more strength, more power. She even kidnapped the Atomic Skull, a superhuman, who gave her quite a boost of energy, exactly what she needed to move to the next part of her protocol: her final aim was to bring Superwoman to the Void and obtain her powers, so that she would have been able to free her master, Ultrawoman. She wasn’t strong enough to do so yet, so she opted to attack the ones closest to the heroine, wanting to lure her to the Void in exchange of their lives.

Midnight's powers come from the digital dimension called The Void. Her powers are: 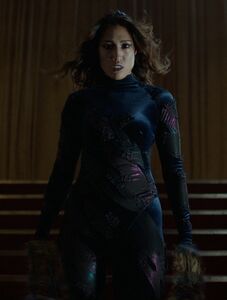