Servant to Herrah the Beast's nest

Midwife is a minor antagonist in the video game Hollow Knight. Hidden in depths of Deepnest, this spider-like creature attempts to befriend the Knight, all in an attempt to eat them.

Midwife can be found in the bottom layers of Deepnest, located behind a breakable wall to the right at the end of the bottom right corridor to the Distant Village. When first encountered, Midwife persuades the Knight to stay as she is a friend to all. She mentions bits on the history of Deepest, such as information on the Distant Village, the fate of Herrah the Beast, and about herself, explaining that she is a servant to the nest and laments how her brood have lost their will to the Infection. She also speaks of history behind Hornet after obtaining the King's Brand, and the weavers when the Weaversong Charm is equipped.

After telling any of her stories, Midwife mentions how hungry she is, before suddenly opening up her mask and revealing her gaping mouth, before frantically chomping at the Knight in order to kill and eat them. Midwife cannot be talked to while she is attacking. Hitting her once with the Nail will make her hide in the wall, where she will not show back up until the Knight enters the area again.

Despite appearing to be calm and acting polite at first, Midwife is a cunning predator who tricks others using her wisdom and "friendly" tactics, wearing a smiling mask as a disguise to deceive her prey of her sly and manipulative nature. Once her prey warmed up to her, she reveals her true intentions and quickly maws them to death to satisfy her seemingly endless stomach. She also appears to get paranoid whenever the Knight Dream Nails her and demands them to get out of her thoughts. 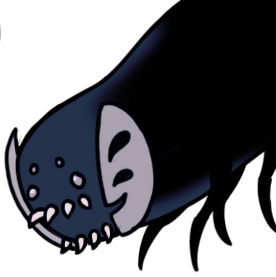 Midwife with her face exposed.
Add a photo to this gallery

Retrieved from "https://villains.fandom.com/wiki/Midwife?oldid=3711124"
Community content is available under CC-BY-SA unless otherwise noted.