To help Leviathan with his goals (failed).

To destroy the Applidrivers (failed).

Mienumon is a major antagonist in the Digimon anime series, Digimon Universe: Appli Monsters. She is one of Leviathan's underlings, as well as the Applidrivers and their Appmon Buddies arch nemesis.

Mienumon resembles a pale blue humanoid that has blue hair and wears a maid-like gothic dress with skulls and black stockings and showers to match her dress. She has a yellow eye on her right eye and her left eye is covered by her hair. She carries a pink chameleon puppet in her left hand. It's revealed later on that her left eye is star-shaped before she became Warudamon.

Warudamon Warudamon resembles a witch-like Appmon. She wears red witch's clothing with spikes, and wears a red witch hat with a demon hand on top. She wears red gloves with fierce-looking claws.

Mienumon can turn herself invisible to avoid detection. She is very skilled with stealth and can pass through red lasers with ease while invisible. Her chameleon puppet can stretch out its tongue to either attack or steal an item.

As Warudamon, she can use her ghostly hands that can scratch any Appmon then control them like puppets, making them attack their own ally. She can morph into a hideous squid monster to devour the opponent.

Mienumon tends to be very sneaky and intelligent. When something dosen’t get her way, she throws a tantrum.

After DoGatchmon defeats Scorpmon, Mienumon retrieves his Appmon Chip from Haru Shinkai while invisible, and later reports to Leviathan. After Sakusimon was defeated by DoGatchmon, Mienumon takes his Appmon chip. She even has an office of her own at L-Corp headquarters.

Some time later, Mienumon sneaks into the computer software, Waffle Inc. and sends Virusmon to infect the whole system and people’s cellphones from all over the world, as well as multiply into clones of himself.

Mienumon attempts to lose the Applidrivers while invisible, but with the help of Navimon, the Applidrivers were still able to pursue her. Mienumon lures them to Shot Island, where they get distracted and attacked by Shotmon while she has time to flee. After escaping Shot Island, the Applidrivers confront her, and she fuses with Sukasimon's Chip and becomes her Ultimate form, Warudamon. Warudamon manages to control Musimon and Dokamon as marionettes to forcefully attack their respective Applidrivers, but Hackmon and Rei intervene and free Dokamon and Musimon from her control. Fumed, Warudamon tries to flee and enter the Dark Net, but Hackmon becomes Revivemon to interfere with her escape. Warudamon tries to devour Revivemon with her Satan Mund attack, but the other Applidrivers and their buddy Appmon in their Ultimate forms finally destroy her with their combined attacks, and Haru took the opportunity to recover Weatherdrmon’s App chip.

Sometime later in the series, at the Appmon Cemetary, Biomon (one of the Ultimate 4 members) resurrects Mienumon as a ghost along with the other previous fallen enemies Sakusimon, Scorpmon, and Sukasimon (although he wasn’t an underling of Leviathan, but just a failed Appmon fusion). She was defeated again by Globemon, Entermon, Oujamon, and Revivemon, driving her away. 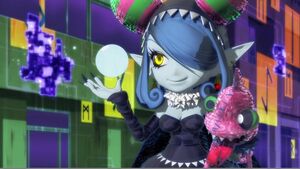 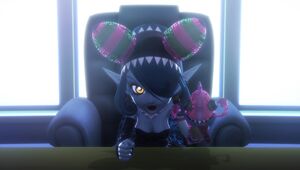 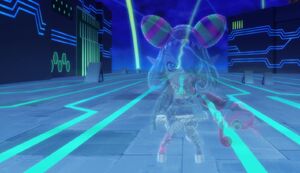 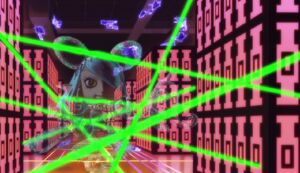 Mienumon sneaking around the lasers. 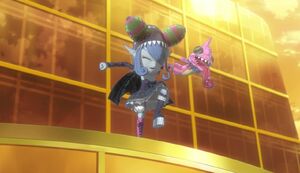 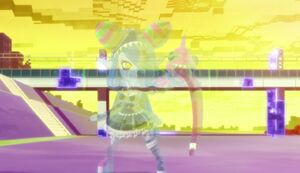 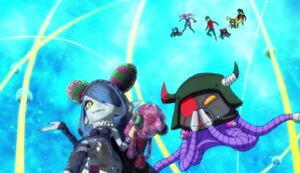 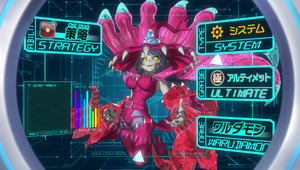 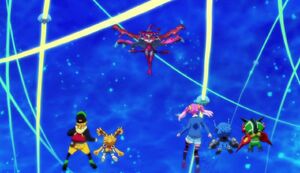 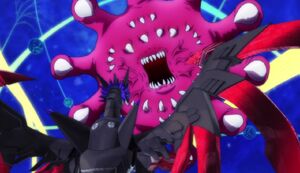 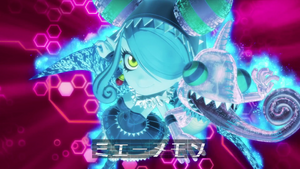 Mienumon when she was resurrected as a ghost by Biomon. 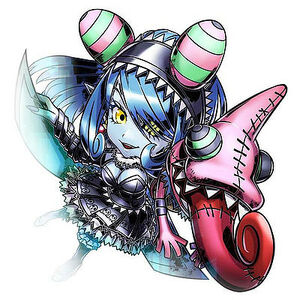 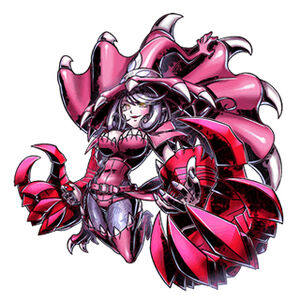