Combat prowess
Mastery of the dark side
Precognition

Mighella is a Nightsister witch and enforcer on the payroll of the criminal syndicate the Black Sun. She was the personal protector of their leader Alexi Garyn. Mighella was a highly trained bodyguard and a witch of Dathomir. Like all the Nightsisters, she is skilled in the use of the dark side of the Force.

Mighella first appeared in the Ron Marz's comic series Star Wars: Darth Maul in issues 3 and 4 of the series.

Mighella was a Nightsister from the planet Dathomir. She served as the personal bodyguard and enforcer of crime lord Alexi Garyn, leader of the infamous Black Sun criminal syndicate. Mighella executed the will of Lord Garyn unquestioningly, with her sword and the power of the dark side of the Force. In 33 BBY, Mighella's service to Alexi Garyn came to an end when a mysterious Force-wielding assassin known only as "Maul" eliminated each Vigo of the Black Sun and their minions charged by his Master Darth Sidious to strike the criminal syndicate Black Sun and destroy it.

The assassin cut his way through all the Sun's lieutenants who were no match for the assassin until only Garyn and Mighella remained. When Maul arrived on Garyn's homeworld of Ralltiir, Mighella sensed him as a disturbance in the Force. Garyn asked Mighella if it was a Jedi but it was not according to her as she had never felt anything like this before. Lex was not concerned as his fortress was heavily guarded by the elite Black Sun, but Mighella wasn't so sure of that. She urged her Master to make haste his exit lest he also fall victim to Maul's wrath and he did as advised. Her master questioned what Maul was and Mighella stated that he was like her but something far different. On route to the yacht Mighella stopped as Maul was coming and would not let him reach her master and confronted the assassin in the depths of Garyn's fortress, where she engaged Maul in combat to buy time for Garyn to escape.

Mighella attempted to confront Maul herself. She asked him what she was, and Maul answered she was a Nightsister. With her blade drawn, she was prepared to to fight Maul. Mighella was confidant that Maul had never faced someone like her whereas Maul said he was far beyond her. She held her fellow dark sider and Nightbrother at bay for a short while before she was eventually overcome by his superior battle prowess. She attempted to use an energized sword to stop Darth Maul in the duel but Maul destroyed her sword and was about to attack the defenseless Nightsister. She suddenly surprised him with a barrage of Force lightning and hit a wounded Maul. He was down to the ground and Mighella was confidant that he had never tasted the power of the dark side. An electrified Maul raised his head and stated she knew nothing of it. This left her completely shocked and questioned how he resisted her attack. A moment later Mighella realized too late that her opponent was a Sith Lord with far-superior knowledge of the dark side. Maul slayed the Nightsister with a slash of his lethal double-bladed lightsaber slicing her in two and Mighella fell failing to protect her master Garyn, whom Maul killed shortly thereafter. 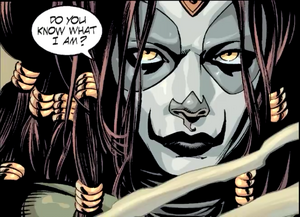 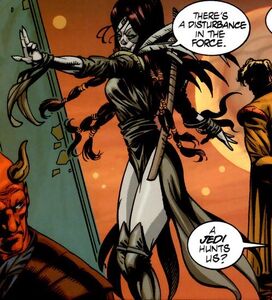 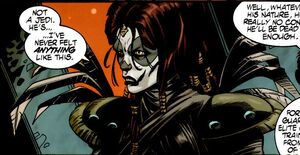 Mighella uncertain of what Maul is.

Mighella states she and Maul are alike. 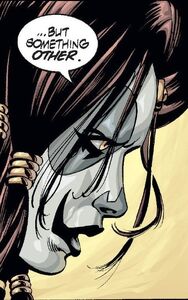 Mighella says the assassin is different. 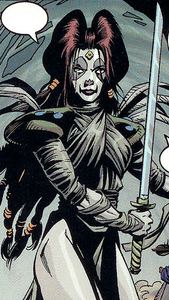 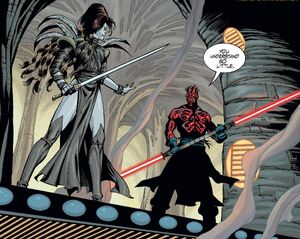 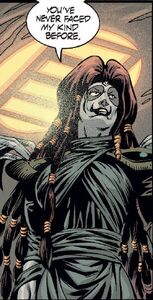 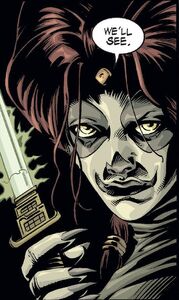 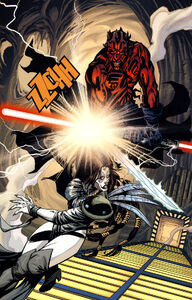 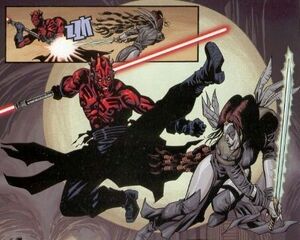 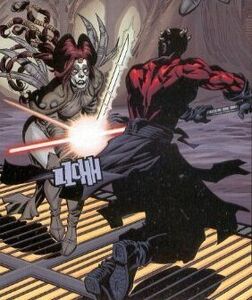 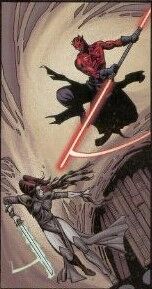 Mighella throws her blade to the side. 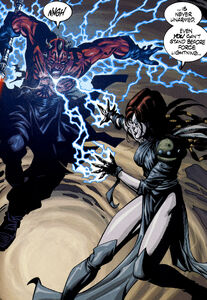 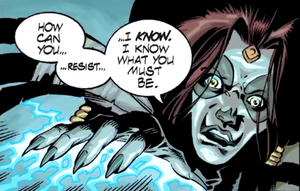 Mighella realizes what Maul truly is. 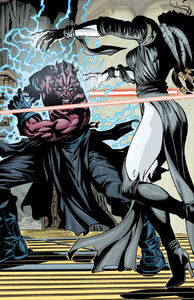 Mighella sliced in half by Maul.

Mighella's severed body falls off a cliff.
Add a photo to this gallery

Retrieved from "https://villains.fandom.com/wiki/Mighella?oldid=4162338"
Community content is available under CC-BY-SA unless otherwise noted.