Leader of the Latinos

Trying to fit in with the Latino gangsters.

To reform himself. (succeeded)

Miguel Alvarez is a Cuban Latino inmate and the tritagonist in the TV series Oz.

He was portrayed by Kirk Acevedo, who also portrayed Mitch Dolgen in The Walking Dead, Carver in Dawn of the Planet of the Apes and Ricardo Diaz in Arrow.

Alvarez's father and grandfather are both serving life sentences in Oz, and Alvarez has been incarcerated for assaulting an old man who accidentally scratched his car. His girlfriend is convicted of the same crime and serving in the Parker Women's facility. Growing up in a hard and poor Latino neighborhood, Alvarez does whatever is necessary to survive. However, he is very much his own worst enemy, and he reacts before he thinks. He is often isolated and has had conflicts with several others, especially Carmen Guerra and Warden Leo Glynn. However, he still appears salvageable to both unit manager Tim McManus and Father Ray Mukada. He is one of only five regular Oz inmates from season 1 to survive the entire run of the show. The other four are Bob Rebadow, Ryan O'Reily, Tobias Beecher and Arnold "Poet" Jackson.

Although Alvarez is often consumed by worst parts of his nature, he has shown many signs of a gentler side. He is devastated about the loss of his only son and is grateful to Father Mukada for helping him through it, even though he later fails to protect Mukada during the riots. He also displays genuine remorse after he blinds a guard and is so consumed by guilt that he attempts suicide.

Alvarez arrives and is stabbed in the receiving and discharge area. He is serving 15 years and is up for parole in 2 for aggravated assault. His girlfriend Maritza is pregnant with their child and is serving in a Woman's facility in the state. He has no intention of being there for the birth of his child since he has never met his father Eduardo or grandfather Ricardo who both are serving life sentences in Oz. Eduardo cannot talk because he has no tongue since a Haitian inmate cut it out when he first arrived in Oz. Ricardo cut the Haitian's heart out and serves life in solitary confinement. At the urging of Father Mukada, the prison priest, Ricardo and Eduardo manage to convince Miguel to be there for his child's birth and it changes his perspective on life. The baby however has a bad liver since Maritza and Miguel both did several drugs during her pregnancy and it ends up dying. Distraught, Miguel becomes a key player amongst the Latino inmates and takes over the gang when their leader is paroled. Ricardo, in the meantime, is suffering from Alzheimer's and Miguel is not sure of what to do about it. During the prison riot, Alvarez is a major leader and takes control of the hostages who are all correctional officers on staff and is particularly brutal with more than one of them. When the S.O.R.T. team takes control, Carlos Rodrigo's (Miguel's friend) head is blown off next to Alvarez. Unlike the other riot leaders, Alvarez ends up in the infirmary after being shot by one of the S.O.R.T. members' rifle.

Alvarez is one of the inmates let back into the newly built Em City. In this season, the Latinos are looking to move up in rank and are not sure whether or not to work with or against the Italian or Homeboy gangs in the drug trade. Schillinger, desperate to kill Beecher, tells Miguel about how he will push things through the mail room for payment but when Alvarez gets demanding, Schillinger dismisses him with an ethnic slur. Peter Schibetta, the son of slain Italian leader Nino Schibetta offers Alvarez a deal in the drug trade to kill Simon Adebisi. Adebisi does the same thing and Alvarez and the Latinos sit on the side to see what is going down. Later, Warden Glynn is upset about the rape of his daughter. Alvarez knows the men responsible and tortures Glynn with this knowledge since he feels Glynn was too brutal towards him. Meanwhile, Peter Schibetta is raped by Simon Adebisi and Alvarez wishes to work with the Homeboys but Adebisi says no since he failed to help him take down the Italians. The Latinos, especially Carmen Guerra, are growing tired with Alvarez's passive leadership and are then brought higher up in standing when legendary thug Raoul "El Cid" Hernandez arrives. Hernandez dislikes Alvarez immediately and casts him out for being "too white." Alvarez is light in complexion, but what Hernandez really means is that Alvarez lacks the "cojones" ("balls") to be a member of El Norte. Alvarez tells Hernandez that he has no problem with him running the gang being who he is and tells him he will do whatever is necessary to get into the good graces of El Cid. El Cid orders him to blind a new CO, Latino officer Eugene Rivera. Apparently Rivera is a former rival gang member of El Cid's and will make El Norte have an unpleasant time as long as he works in Oz. If Alvarez does not do this then he will be out of El Norte and killed. Alvarez does this and is thrown into solitary as a result.

In solitary, Alvarez is being reduced to drinking his own urine to survive. This is because the COs "forget" to feed him regularly since he blinded Eugene Rivera. Father Mukada, Sister Pete, and Dr. Nathan think it is for the better to get Alvarez out of solitary since he has been cutting and trying to hang himself inside. Glynn reluctantly agrees to let him out. In Em City for the time being he is allowed into El Norte. In the boxing ring, he agrees to represent the Latinos when inmate Carlo Ricardo is sent to the hole. He boxes against gay inmate Jason Cramer who beats him after Ryan O'Reily spikes Alvarez's water. Losing to a gay inmate causes Miguel to be the subject of various ridicule and El Cid starts to question his worth once again. Later, Alvarez assists the Latinos in helping Simon Adebisi take down the other Homeboys so that they can play a larger role in the drug trade. The drug leaders are now Hernandez, Pancamo, and Adebisi who are working as three-way partners. Being in Em City, Alvarez has agreed to interact with Eugene Rivera over the blinding, and Rivera is anything but forgiving throughout it. Hernandez at the pecking of Guerra starts to question Miguel's commitment to El Norte. When the Latinos steal drugs from Ryan O'Reily, O'Reily tips off the COs to bust El Norte, and Alvarez leaves the scene two seconds early and is not sent to solitary as a result. El Cid, angered by this thinks Alvarez snitched on them and orders Guerra and Ricardo to kill Alvarez. Alvarez instead kills Ricardo in self-defense and is thrown into solitary, but not before lying to Warden Glynn about the rape of his daughter. 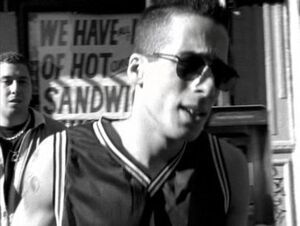 Alvarez as seen in his crime flashback. 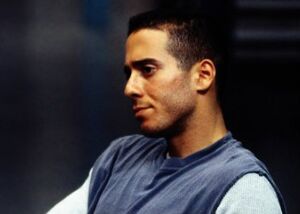 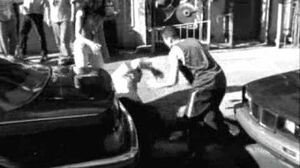 Oz - Miguel Alvarez
Add a photo to this gallery
Retrieved from "https://villains.fandom.com/wiki/Miguel_Alvarez?oldid=4019225"
Community content is available under CC-BY-SA unless otherwise noted.