Manipulate Dexter into befriending him so he too can become a killer and kill those who he thinks deserve justice. (succeeded, then failed).

Fallen Friend of the Hero

Miguel Prado is a character on Dexter. Miguel was a popular senior Assistant District Attorney in Miami. He serves as one of the two main antagonists of season 3 (the other is George King).

He was portrayed by Jimmy Smits.

Miguel has family from Cuba, and is the eldest of three brothers. Miguel has fine, dark black hair matched with a mustache above his lip and darkened tan skin to represent his culture. He has a slight gut and some weight in his face, but otherwise he can be seen as an attractive man who has a smooth speaking voice.

His typical attire consists of dress pants and an expensive button up shirt with a tie. Underneath this he wears a sleeveless white t-shirt. On occasion, he may also wear a suit jacket along with the rest of his attire. He almost always wears expensive dress shoes.

His kill attire is that of a pitch-black outfit, long-sleeved complete with black leather gloves and boots. Miguel's shirt also covers much of his neck, however underneath this he wears a black sleeveless undershirt.

Miguel comes from a well-connected family whom he cares for deeply. He has two brothers, Ramon and Oscar, and a wife, Sylvia. He revealed that his father is a Vietnam veteran when Dexter appeared with the knife he used to kill a drug-dealer named "Freebo" and, by accident, Miguel's younger brother, Oscar. He also revealed that his father was abusive and said that he felt great when he "kicked the shit out of him and threw him down the stairs."

Miguel takes it hard when his younger brother, Oscar, is found dead in Freebo's house. After that, Miguel calls Dexter Morgan, meets him at the crime scene, and questions him about the murder scene; he is unaware that Dexter killed Oscar. Dexter tells him that he was interested in the case due to Miguel's relationship to the victim. This leads Miguel to apologize and invite Dexter to Oscar's funeral.

Afterward Miguel tracked Freebo using his mother's cellphone to his girlfriend's house and had intentions to kill him. But Dexter had beat him to it and killed Freebo first. Miguel caught Dexter leaving the garage, where Freebo's body was with a murder weapon in his hand (his father's combat knife he kept from Vietnam), but Dexter convinced him that he had killed Freebo in self-defense and kept Miguel from entering in kill room. Before Miguel left, some of Freebo's blood spilled onto his shirt.

This event bonded Miguel with Dexter and they started hanging out together, making Dexter believe that Miguel could actually become his friend. After Freebo's death, he became worried that police were wasting their time looking for him, especially when Freebo became suspect in Javier Garza's murder case, although he was actually dead. Dexter managed to put investigation on the right track and Miguel gave him his bloody shirt with Freebo's blood, telling Dexter that he trusts him. However that actually turned out to be bovine (cow's) blood.

The two of them became friends and started to work together to kill criminals, such as Clemson Galt. He learned about the Code of Harry from Dexter and is the second person in law enforcement to witness Dexter in a kill room (the first was James Doakes). With Dexter's guidance he would go on to kill a debt enforcer, Billy Fleeter.

Later that same night, without Dexter's knowledge, Prado kills Ellen Wolf, a defense attorney who was trying to ruin his career by claiming some mistakes he made in his cases were "proof" of Prado's claimed "illicit prosecution tactics, which include witness tampering and deliberately ignoring evidence". Dexter was disappointed with Miguel's violation of the Code and digs up Wolf's body for the police to find to teach Prado a lesson.

Prado seems to have learned his lesson after a talk with Dexter, but Dexter later begins to doubt the authenticity of Miguel's friendship when he learns Miguel used exactly the same language he used in a talk between them in a talk with Rita about trust. Dexter's suspicions are confirmed when he examines the shirt Miguel gave him after the murder of Freebo. Dexter then realizes that it was actually pig's blood and not Freebo's which made him enraged for being tricked and used by someone he thought was his friend.

Dexter and Miguel then become enemies. Miguel threatens to expose Debra Morgan's relationship with the CI Anton Briggs and use his position as ADA to make trouble for Dexter, Dexter decides to kill Miguel using the MO (Modus Operandi) of a sought-for killer, just as LaGuerta discovers Miguel killed Ellen. When Miguel discovers that LaGuerta is investigating him, he plans to kill her, but Dexter discovers what Miguel is planning, and kills him in order to protect LaGuerta not before telling him that he killed his brother.

The people of Miami mourns the passing of Miguel Prado, a hero to all, and so the City Council votes to name a highway in Miami after Miguel. This upsets LaGuerta, who is ready to accuse Miguel of murdering Ellen Wolf. Dexter is able to convince her that doing so would upset Miguel's family and the Cuban Community, and even then there is a high chance that nothing could be proven, so she has to drop it out of empathy.

It was later discovered through Miguel's brother, Ramon, that he also lied about the story of protecting his family from their abusive father when it was in fact Ramon who did it. 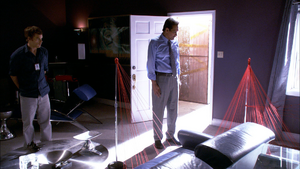 Dexter explains to Miguel how his brother Oscar was murdered, leaving out it was him who did it. 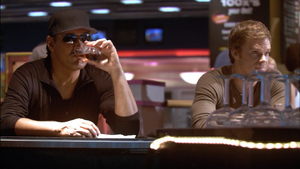 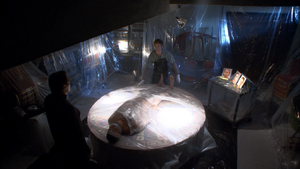 Miguel and Dexter with Bill on their kill table. 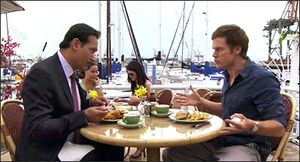 Dexter speaking with Miguel about how he should not have murdered Ellen Wolf, since she committed no actual crimes. 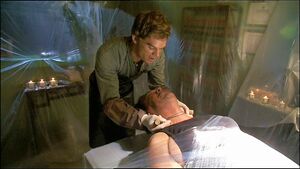 Dexter kills Miguel by strangling him with a garrote. 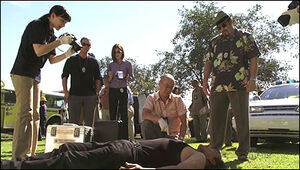 Miguel's body is found, made to look like a victim of The Skinner.