Aid Zhuqiaomon with his goals (failed).

Mihiramon is an Exalted Beast Digimon whose name is derived from the mythological Mihira. It is the "Tiger" Deva, and serves the Sovereign Azulongmon. As a follower of Azulongmon, it is the biggest ruffian among the Deva, though it is also a brilliant tactician that specializes in reading the terrain. With its tremendous speed, faster than the wind when racing across the land and quicker than a sound when soaring through the sky on its two wings, it runs down the opponent. In combat, it rips the opponent apart with its sharp fangs and claws, and it has mastered the "Bǎo Bàng", which is its tail transformed into an octagonal three-section staff. It resembles a giant flying tiger creature with wings.

Mihiramon appears in Digimon Tamers. Like all Devas, he serves the Sovereign Zhuqiaomon (unlike other profiles in which he serves Azulongmon). He is the first Deva to appear and also the first to be destroyed. When Mitsuo Yamaki activated the Juggernaut Program to eliminate all Digimon on Earth, an anomaly infiltrated the vortex and Bio-Emerged on top of the Hypnos Tower, in the form of Mihiramon. Mihiramon tormented Yamaki's foolery to the brink of insanity. Renamon and Terriermon both attempted to battle him in their Champion levels but both failed miserably, as he nearly killed them both with Samurai Tiger Tail, although Terriermon noticed he always circled like a shark before he attacked.

Guilmon digivolved into Growlmon but was mortally wounded by the tiger, Takato also feeling his Digimon's pain, fell unconscious. After Takato and Growlmon had a heart-to-heart moment in a dream world, Takato used a Blue Card to Matrix Digivolve Growlmon into WarGrowlmon who battled Mihiramon. Mihiramon was unable to comprehend how WarGrowlmon digivolved to this level and struck him with a spiked blade. WarGrowlmon seized Mihiramon by his tail and blasted him at point-blank range with an Atomic Blaster, destroying him.

An Ultimate-leveled Digimon with the appearance of a tiger, he is one of the "Deva Digimon". A follower of the Four Holy Beasts member Azulongmon, he is the roughest of the Devas, and acts as their strategist: his expertise in tactics allows him to read the lay of the land in order to find a geographical advantage. He is able to run across the heavens faster than the wind with his two wings, and is able to crush his enemies effectively after running on the ground at speeds faster than that of sound. In combat, he tears the enemy with his sharp fangs and claws, before transforming his tail into a octagonal three-section staff, of which he is capable of wielding masterfully. His special attack is "Vimohana", which slams his octagonal three-section staff onto the ground, creating a shockwave around him. 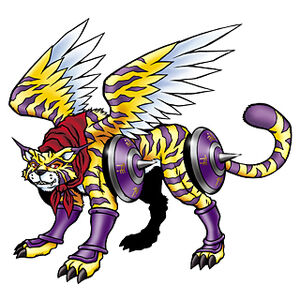