Antagonizing and clashing with Ken Barlow.

Take advantage of his wedge-issue against Ken Barlow.

Mike Baldwin is a fictional character of the British soap opera Coronation Street. He served as the show's central anti-villain from 1976 to 2006, thus appearing on the serial for 40 years throughout his time on the programme.

The character represented many and was also involved in some of the show's high-profiled plotlines, most notably in a love triangle scenario with the show's central protagonist Ken Barlow and his wife Deirdre in the early 1980s. The storyline of Mike and Deirdre's affair had gripped the nation when Ken ultimately discovered the truth behind their betrayal in 1983, but Deirdre eventually chose Ken over Mike in the end. The storyline's follow-up triggered a longstanding feud between Ken and Mike, which continued to impact the show's events over the next two decades up until they eventually resolved their differences following the "Frescho Siege" week of episodes in mid 2000.

In the events of Mike's longstanding rivalry arc with Ken, his other storylines saw him marrying and later divorcing Ken's daughter Susan Barlow; endure a marriage breakdown with his second spouse Jackie Ingram; develop his relationship with local resident Alma Holwell that leads to the pair embarking on a explorative marriage; instigate a conflict with his fellow nemesis Don Brennan that leads to the latter's vendetta which involves kidnapping Alma and trying to kill Mike before dying in a road accident; contribute to Ken's plight to exonerate Deirdre after she was wrongfully imprisoned by her fraudulent ex-fiancé Jon Lindsay; being engaged to and later marrying his fourth wife Linda Sikes that ends after her dalliance with his son Mark Redman is exposed; and starting a custody battle with the Barlows over his other son Adam Barlow following Susan's death in 2001.

While Mike is not as evil as several of the show's most villainous characters such as Alan Bradley and Richard Hillman among several others as well, he still developed traits as an antagonistic regular due to him being portrayed as a self-made cocky businessman who can at times be cruel and prove to be a manipulative cheater - although he would sometimes show a softer side once in a while. In the character's final storyline that saw him being killed-off, Mike contracted Alzheimer's disease and eventually died in the arms of Ken.

He was portrayed by the late Johnny Briggs.

Mike Baldwin is a self-made businessman who arrived in Coronation Street in 1976 when he opened up a new factory "Baldwin's Casuals" dealing in making denim jeans and jackets. He flirted with barmaid Bet Lynch behind the back of his common-law-wife back in London, although he later dumped Bet.

In 1983, Mike began an affair with Deirdre Barlow, who was getting bored of her life with her husband Ken Barlow and looked for more excitement. She turned to the far more interesting Mike, who wished to start a proper family with Deirdre and her young daughter Tracy. However Deirdre decided in the end to remain with Ken, who later forgave her for the affair. This act would continue a feud between the two men for many years to come.

A couple of years later Mike began dating Ken's 21-year-old daughter named Susan and the pair later married against Ken's wishes. Mike dotted on Susan and bought her gifts and hoped to start a family with her, however she was more interested in making a career for herself. When Susan discovered she was pregnant, Mike was over the moon. But Susan claimed she had an abortion, and a disgusted Mike threw her out and Susan left Weatherfield. Unknown to Mike at the time, she didn't have the abortion and gave birth to his son Adam, who he wouldn't know existed until 12 years later.

In the early 1990s, Mike married his second wife Jackie Ingram. She later divorced him for his ulterior motives. He also helped the residents support local resident Rita Fairclough after her traumatic ordeal at the hands of her tormenting ex-lover Alan Bradley.

Soon enough, Mike later got together with Alma after caused her to split from Ken. But the marriage would fall apart when Mike had an affair, but he confessed to Alma as he was being extorted by Greg Kelly in the latter's antics with his estranged father Les Battersby.

In 1997, Mike was targeted by his fellow nemesis Don Brennan over a business conflict between them. Don sought revenge on Mike and tried to kill him, as well as Alma by kidnapping her before plunging their car in the canal. But in the end Don confronted Mike until the police were called to arrest him. Don tried to run over Mike, but crashed the car and was killed in the resulting explosion - which Mike watched alongside both Ken and Rita after they rushed to his aid.

Towards the end of the 1990s, Mike and Ken were forced to team up with Deirdre gets arrested for a crime she didn't commit - having been implicated for fraudulent dealings that her ex-fiancé, Jon Lindsay, had been perpetuating. When Deirdre is wrongfully convicted for Jon's crimes whilst Jon himself is released without caution, Mike and Ken resolve to find any evidence against Jon to settle Deirdre's exoneration. This nearly collapses until Jon's bigamy past is revealed, which Mike and Ken use to exonerate Deirdre and have Jon arrested for his crimes.

By 2000, the feud between Mike and Ken has begun to die down. This involved the pair being held hostage in a siege the Freshcos supermarket, up to the point where were tied up in a room together. The two men argued and threw insults at each other, but the matter got serious when Mike suffered a heart attack and Ken had to calm him down to prevent him from dying. Although they wouldn't be friends, they finally managed to put their feud behind them and Ken even helped organize a surprise birthday party for Mike.

At one point, Mike took Ken and their friend Audrey Roberts for a drink in The Rovers Return Inn at the point where longtime landlord Fred Elliot looks set to be replaced by the snobbish Lillian Spencer. She seeks to woo Mike, but he rejects her after she impulsively bars both Rita and her colleague Norris Cole for no reason whatsoever. Later on, Mike is the first to observe the police responding to Richard Hillman killing Maxine Peacock after trying to kill Norris' roommate Emily Bishop for financial matters.

In 2004, Mike's nephew Danny arrived to help him out at the Underworld factory. Mike's brother passed away, and it was discovered that Danny was actually Mike's son as Mike had an affair with his brother's wife. Danny was disgusted by this and was close to hitting Mike.

Mike later began suffering memory loss and during a Christmas meal with his family he began asking for his brother, not realizing he had been dead for months. It was discovered Mike had developed Alzheimer's disease and got increasingly worse overtime, subjecting the once powerful man to weakness and hopelessness. Mike also began living in the past and asking about previous dead residents of the street.

After being soaked in the rain Mike was admitted to hospital with pneumonia. He managed to escape and returned to Coronation Street and hung around outside his old factory. He was found by his old rival Ken, who tried to help Mike back home. However, Mike began to believe he was back in 1983 and told Ken he needed to collect Deirdre and Tracy to come and live with him. Mike collapsed and Ken held him in his arms, which leads to the two having a somewhat emotional conversation as Mike blissfully told him that Deirdre wants him. Mike then suffers a massive heart attack, and Ken could only watch in horror as Mike ultimately succumbs to his condition and dies in his arms.

Moments later, Danny arrives to find that Mike has died - which is thereupon disclosed to Deirdre and all the other residents. Mike's will later gets settled before his funeral eventually takes place, which Ken and Deirdre attend as they say goodbye to the man who had impacted in their lives on different accounts. 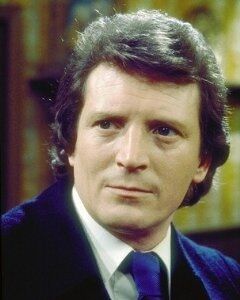 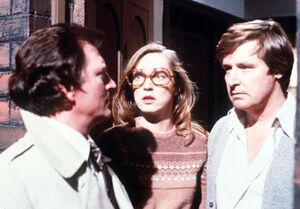 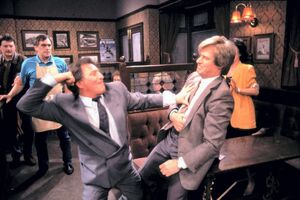 Mike gets one over on Ken. 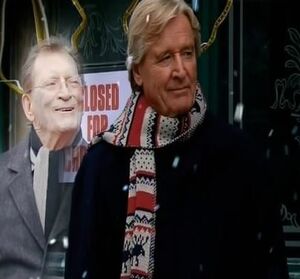 Mike Baldwin's ghost in the Text Santa Christmas Sketch in 2012.